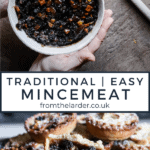 This Easy Mincemeat Recipe is exactly what you need when you are required to make homemade mince pies pronto. If you want a homemade mincemeat to use straightaway then this is the recipe for you. No resting time is needed, it’s a quick assembly job and the result is a supremely spiced and zesty mincemeat plump with fruits, rich with brandy and with a silky luxurious texture.

I simply adore Christmas mincemeat. In my humble opinion it’s the best thing about the season. Along with The Waitresses’ Christmas Wrapping, Hot Buttered Chocolate Rum and festive jumpers for Billy Buddy.

Stir-up Sunday (the last Sunday before advent) is the traditional day to make your mincemeat (and Christmas pudding) for the season. It’s nice to get this job out of the way in November as it means you can have homemade mince pies at your disposal any time during the holiday period. However it's not always possible to be that organised, I know there has been many a Stir Up Sunday when I have barely touched a toe in the kitchen. However, you can rest assured that if you want to bake a last minute batch of mince pies sometime in December then this homemade mincemeat to use straight away will be a life saver.

Mincemeat is the traditional filling of a christmas mince pie. A few centuries ago mincemeat was a way to preserve meat, usually mutton, without smoking or salting. The meat would be chopped very finely, aka minced, then preserved with spirits and spices and sugar. It’s more usual these days for the minced meat to be replaced with beef suet and dried fruit.

Although if you haven’t tried mince pies made in the traditional method using this Victorian Mincemeat recipe then you really need to address your life choices.

Why do we eat mincemeat at Christmas?

The reason we eat so many mince pies over the festive season is all to do with the spices. It is thought that cinnamon, cloves and nutmeg were given by the magi to the baby Jesus and so mincemeat, which is abundant in these spices, has always traditionally been associated with Christmas. And I totally take umbrage with the idea that if mince pies were so nice then why do we only eat them at Christmas. Well, that’s why Eccles Cakes were invented. They are basically mince pies that we are allowed to eat all year round.

I made the unfortunate mistake of buying pre-made mincemeat for some recipe testing recently and the difference between homemade and shop bought is extreme. The shop bought stuff is all sugar and no flavour.

This Easy Homemade Mincemeat tastes of plump juicy fruits and spices and is rich with brandy with a silky luxurious texture.

Plus if you’re making it yourself you can make it exactly to your preference. It's an extremely versatile recipe which you can switch up for the dried fruit, alcohol and type of sugar you have to hand. It will always be a preferred option to the sickly sweet supermarket version.

Why you'll love this recipe

If  you need to make some Homemade Mince Pies asap then this Easy Mincemeat Recipe is the way to go.

If you want a more modern homemade mincemeat which is made with fresh cranberries and is nut free and vegan then perhaps try this Cranberry Cointreau Mincemeat.

What ingredients are in mincemeat?

Why do you use beef suet in mincemeat?

Beef suet is the hard fat from around the joints and kidneys of the animal and it is favoured in mincemeat due to its richness of flavour and the silky way it coats the luscious fruit.

Unfortunately the commercial beef suet you can buy in a packet in your local supermarket is not gluten-free. The suet is processed into small pellets which are coated in wheat flour. This allows the suet to be easily stored and weighed and used in baking but it's not gluten-free.

Can you buy gluten-free suet?

You can buy gluten-free suet in the supermarket but it is also vegetarian suet and it is not a product I like to use. The ingredients list is iffy and doesn't have the right flavour.

If you want to make gluten-free mincemeat then ask if your butcher whether they are able to source fresh beef suet for you . It will probably be provided in a hard block which you will need to grate with a bit of gluten-free flour to create little fat pellets which helps to evenly disperse the fat. You can store the suet in the freezer in ziplock bags and you can use it directly from the freezer.

You can also use this fresh beef suet in your Traditional Christmas Pudding. Or in a Spotted Dick.

If you are finding it hard to source fresh beef suet or need a veggie or vegan alternative then you can substitute with grated coconut butter.

What can I substitute for the brandy?

You can substitute absolutely any alcohol for the brandy. Rum, Pedro Ximénez, Cointreau or even Amaretto are my favourites.

If you don’t like mixed peel then just leave it out, or substitute for a couple of tablespoons of marmalade. However, have you ever tried making your own? Homemade Mixed Peel has a vastly superior flavour and can be useful for a lot of your Christmas bakes.

Can I substitute in other dried fruit?

Of course! Anything goes in mincemeat. Chopped dried figs, prunes, cranberries, sour cherries. You can just swap in the same weight of an alternative dried fruit and away you go.

Dark muscovado sugar is used here for its rich treacly flavour. However, if you want a slightly lighter mincemeat then you can use light muscovado sugar. Or if you only have in soft light brown sugar then use that.

How do you make the homemade mincemeat?

Note. This recipe makes about 4 large jars of homemade mincemeat. Enough for 4 batches of mince pies. Presuming you are not making mince pies for a very large crowd you will want to store the mincemeat you are not using straightaway. This will require cooking it out (see below).

Homemade mincemeat to use straightaway

Yes! Your mince pies will be delicious if you make them with the mincemeat you prepared 5 minutes ago.

However, if you are in the mood for planning ahead then the mincemeat will be even better if you make it a week or two before you want to make your mince pies which will allow the flavours to mature.

How to cook out the mincemeat for storing

If you are not using the mincemeat straightaway then you need to cook it out before storing. This is to allow the suet and sugar to melt, coat and preserve all the fruit evenly. Plus it also stops the apples from fermenting.

The mincemeat will keep for 3 months if stored in a cool and dark place.

How to use mincemeat

Of course this Easy Mincemeat Recipe is the ideal filling for mince pies but if you need any further inspiration, look no further than the following recipes:

If you’ve never made your own then I urge you to give this Easy Homemade Mincemeat Recipe a try and if you do then please leave a comment below and/or give the recipe a rating. If you use this recipe as a jumping off point then I’d also love it if you’d share your version and tag me on instagram. It is so lovely for me to see your creations and variations of my recipes.

Calories: 87kcalCarbohydrates: 13gFat: 3gSaturated Fat: 1gCholesterol: 2mgSodium: 4mgPotassium: 100mgSugar: 9gVitamin A: 5IUVitamin C: 0.7mgCalcium: 10mgIron: 0.3mg
Have you tried this recipe?Head to the comment section and let me know what you think!