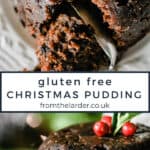 Nothing beats a homemade Traditional Gluten-Free Christmas Pudding. It simply does not compare to anything you can buy in the shops. This light and fluffy pudding is bursting with plump luscious brandy sodden fruit and is rich with nuts and spices. 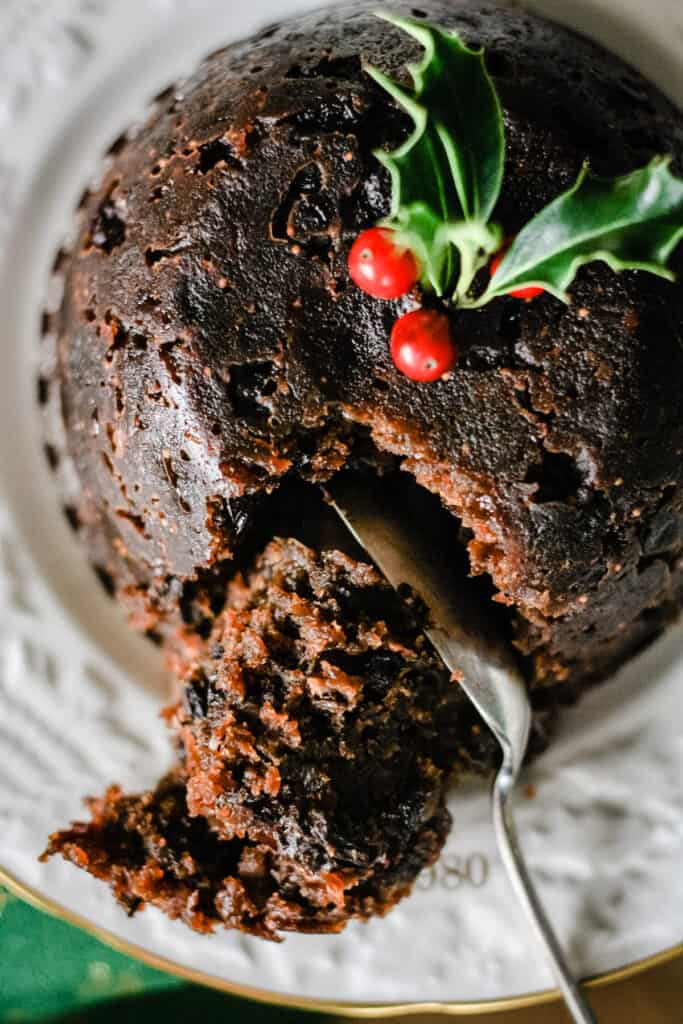 My Auntie Lil made every Christmas pudding in the family and hers was unrivalled. When I reached my twenties and would relish any chance to bake I asked my mum if she thought Auntie Lil would mind if I made the Christmas pudding that year. My mum replied that thought it might be a relief to my ageing Aunt to cater for one less. Despite my pudding turning out relatively okay, thanks to my Aunt’s impeccable instruction, she still dropped off a Christmas pudding and a box of mince pies to our door on Christmas Eve. She was obviously not quite ready to hand over the pudding baton just yet. Who can blame her, the making of the pudding is my favourite festive ritual every year.

What is Christmas Pudding?

Christmas Pudding is traditionally eaten over the festive season. It is a luxurious steamed pudding made with dried fruits, alcohol and spices and a version of the pudding has been eaten in Great Britain since medieval times.

Growing up Christmas Pudding also promised hidden treasure as a foil wrapped penny was always tucked within the dark fruits. It was good luck to whomever received the penny in their bowl. It also meant that the whole affair was imbued with a metallic flavour which I think rather fondly of. This isn’t really the done thing now – health and safety issues of course!

The Christmas Pudding is usually prepared on Stir-Up Sunday which is the last Sunday before advent. This is when the Christmas puddings, mincemeat and Christmas cake would usually have been lovingly prepared by the cook of the family. Each family member would have then taken a turn to stir the Christmas pudding whilst making a wish. It’s all very Mrs Beeton but still Stir Up Sunday is always the day I commit to these essential festival bakes. It actually works well to get these jobs done and dusted at the end of November. But it also heralds the start of the season with the Christmas music playing, a glass of mulled wine next to the stove and the scent of fruits and spices permeating the kitchen.

According to tradition the Christmas Pudding is then wrapped and stored under the bed until the family is ready to serve on Christmas Day. This is what Delia says anyway but I have found unwise if you have a dog. Stowed away in your kitchen larder is perfectly acceptable.

So you make the pudding 5 weeks before you eat it??

Yes indeed. The amount of dried fruit, fat, sugar and alcohol in the recipe preserves the pudding so it can be made weeks or even months in advance. This resting period is necessary for all the flavours to really mature and it allows your pudding to have the best taste and texture.

Christmas puddings are a truly ritualistic event; making them, watching them for the days, weeks or months they are kept and then the ceremonial eating of them – scorched with brandy and doused in a hefty amount of brandy laced white sauce. 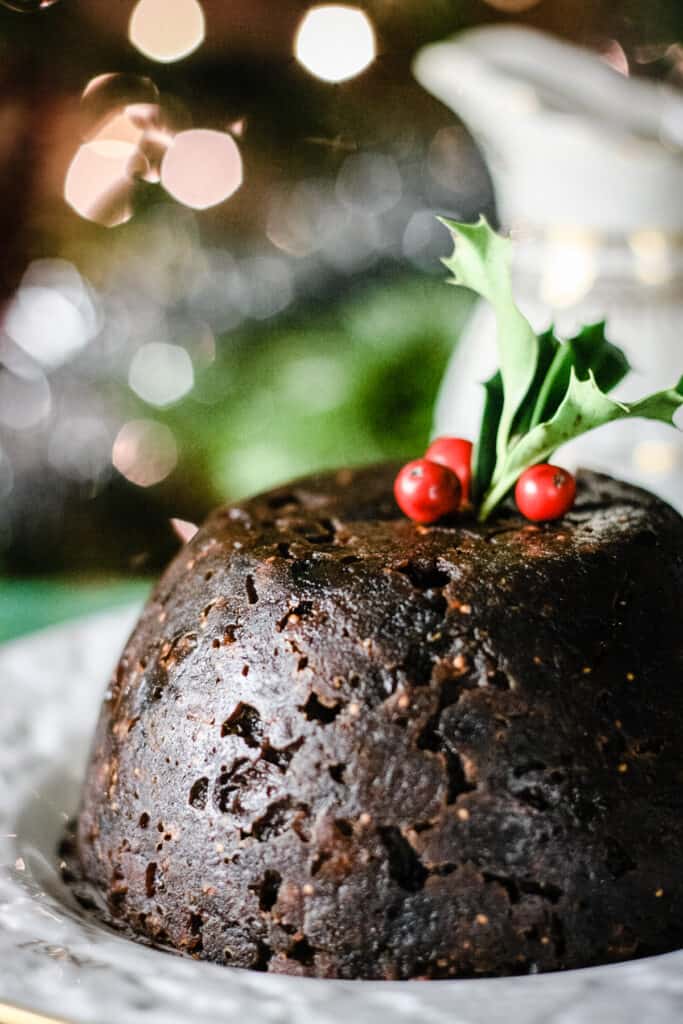 Why is this Gluten-Free Christmas Pudding recipe so brilliant?

If you want something a little different on Christmas Day this Chocolate Chip Clementine Christmas Pudding is simply an outstanding alternative.

Suet is a hard animal fat found around the loins and kidneys of sheep and cows. It is often used in traditional steamed puddings like Christmas Pudding or Spotted Dick because of its low melting point.

Actual suet is gluten-free as it’s a natural animal product. However, the beef suet sold in packets in the supermarket comes in pellets coated in wheat flour, so it is not gluten-free. You can buy gluten-free suet in the supermarket but unfortunately it is also vegetarian and the ingredients list on the back of the packet leads to quite shady reading.

I source real animal suet from my butcher but you will need to shop around, not every butcher can supply it. Your local farmer at the market is usually the best source as you can get it directly from them. The suet is usually supplied in a large hard block which I grate in the food processor with a few tablespoons of gluten-free flour to form the same kind of pellets you would buy in the supermarket for even distribution in the recipes.

Only substitute if you have exhausted avenues for real beef suet. These substitutions are good in a pinch but don’t give quite the same results as the suet:

If you are using these substitutions you should measure out the required amount and freeze. Then grate the frozen fat into the pudding for even distribution.

Don’t substitute with butter though as the pudding will be too greasy. 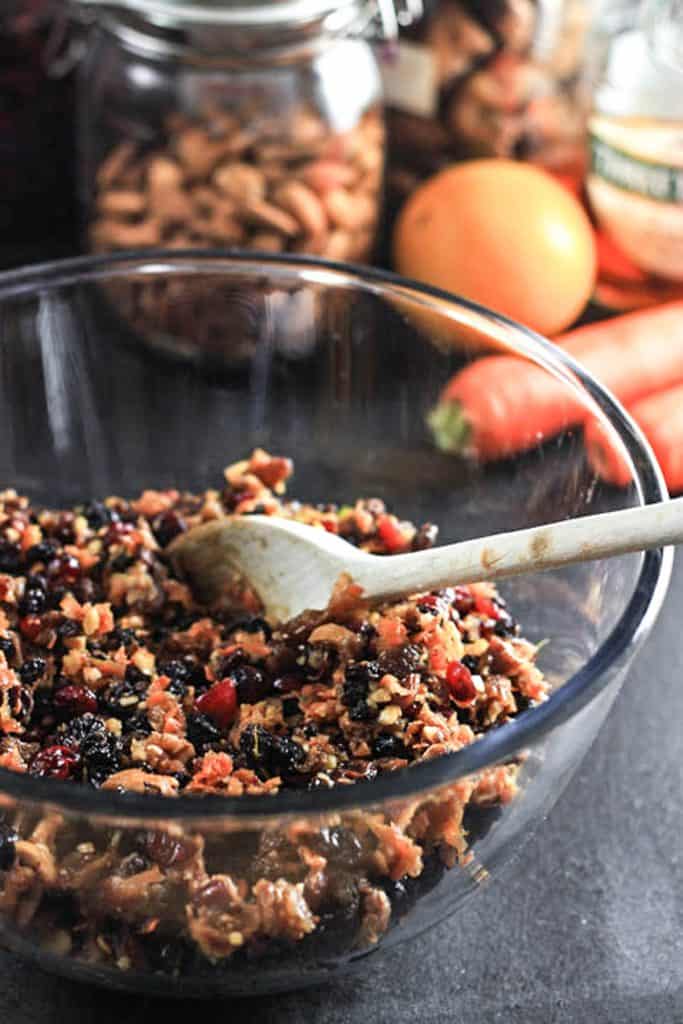 How do you make a Gluten-Free Christmas Pudding? 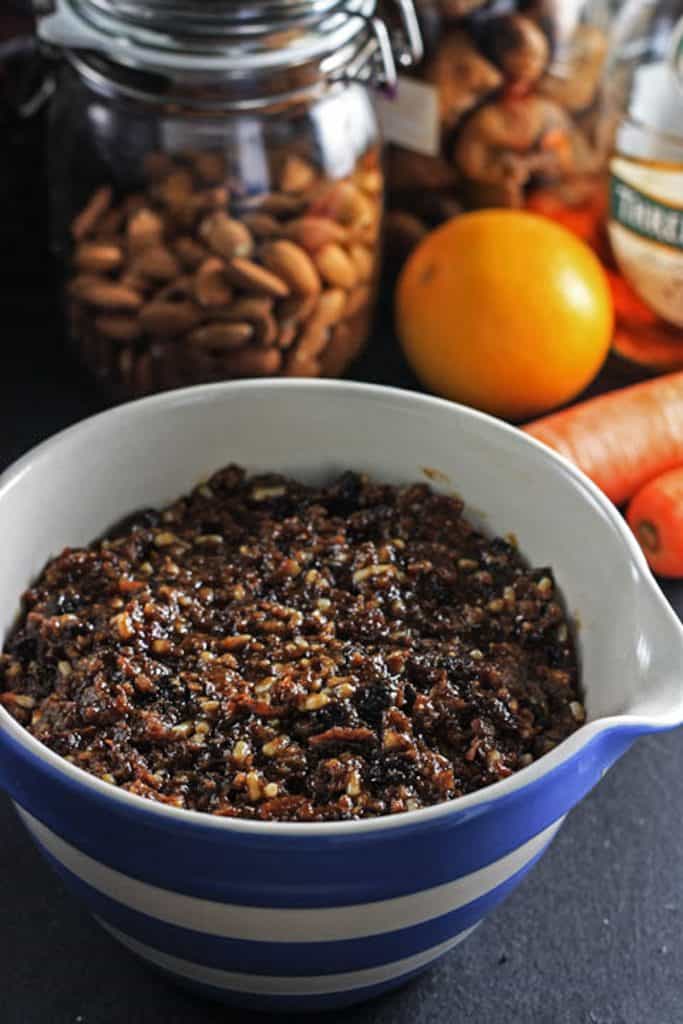 How do you steam a Christmas Pudding? 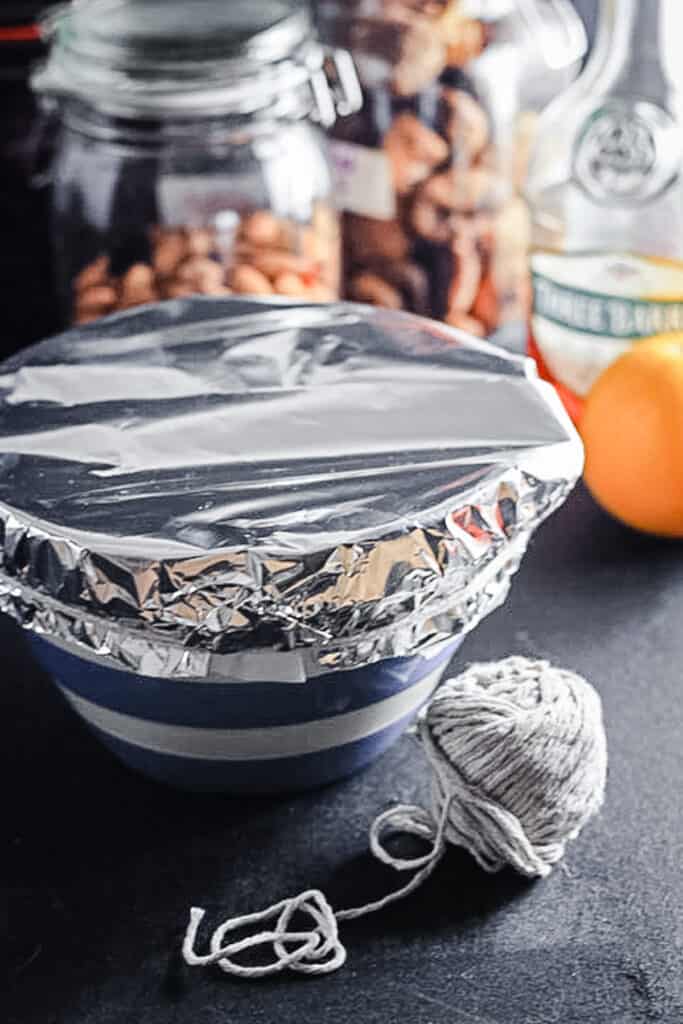 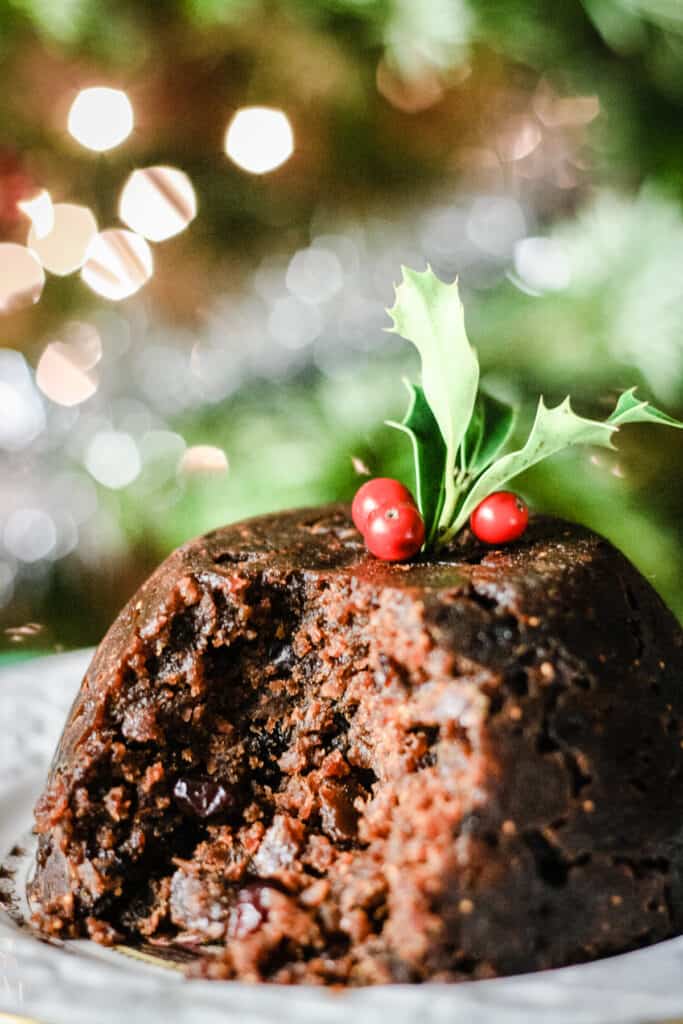 How is Christmas Pudding served?

You turn the Christmas Pudding out of its pudding basin onto a festive plate, pour brandy over the top and light a match to it.

The pudding is brought resplendent and aflame to the Christmas table.

You can serve the pudding with any of the following (in our house I provide every single option – everyone wants something different and I oblige – it’s Christmas!)

If you make this Traditional Gluten-Free Christmas Pudding then please leave a comment below and/or give the recipe a rating. If you then go on to use this recipe as a launch pad for your own baking creation then I’d also love it if you’d share it and tag me on Instagram. It is so lovely for me to see your versions and variations of my recipes. 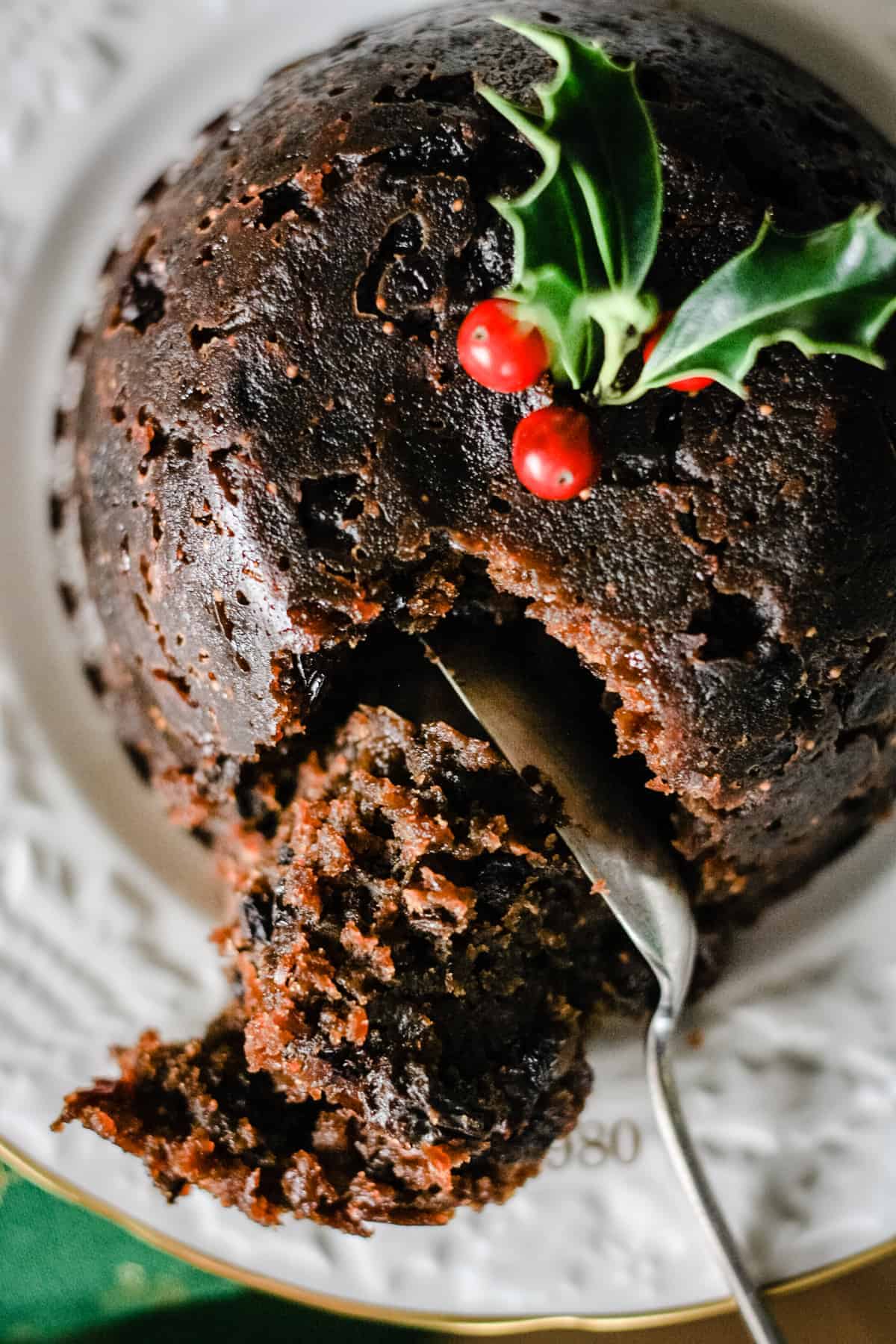 Dried Fruit - I think the sultanas are necessary but you can switch out the raisins for currants and the figs and dried cranberries to whichever dried fruits you enjoy. Almonds - these are optional if you need to make a nut-free pudding or you can substitute for pecans or walnuts. Apple - I like to use Bramley apple but Granny Smiths are fine too. Suet - Commercial suet is coated in wheat flour. I haven't found gluten-free suet that I like but if you order fresh suet from the butcher it will come in a block and you can grate it with rice flour to create suet pellets which will evenly distribute throughout the pudding. Or you can substitute with either lard or coconut butter. If you do, then freeze the fat before grating into the pudding for even distribution. Dark Brown Muscovado Sugar - can be substituted for any dark brown sugar. Sift the sugar before you use it - muscovado sugar can be a bit clumpy Breadcrumbs - you can use any gluten-free breadcrumbs. Gluten-Free Flour - I use Doves Farm Gluten-Free Plain White Flour. Making ahead - You can make your Christmas Pudding at least 3 months in advance if you so wish. It keeps very well in a cool dark place. Re-heating - Christmas Pudding is not very nice eaten cold, it needs re-heating. Please try not to microwave your Christmas Pudding. It will make the pudding tough and heavy. You can re-heat leftovers wrapped in foil in the oven.

This recipe was originally published in December 2015 and updated in October 2020 with more clarifications to the method and a slight alteration to the quantities in the recipe.