Bramley Apple Mincemeat Pudding is a must at this time of year. It's an excellent way of using up all your excess mincemeat or makes a lighter alternative to Christmas Pudding at the end of your festive feast. Both the regular flour and gluten-free recipes are listed below. 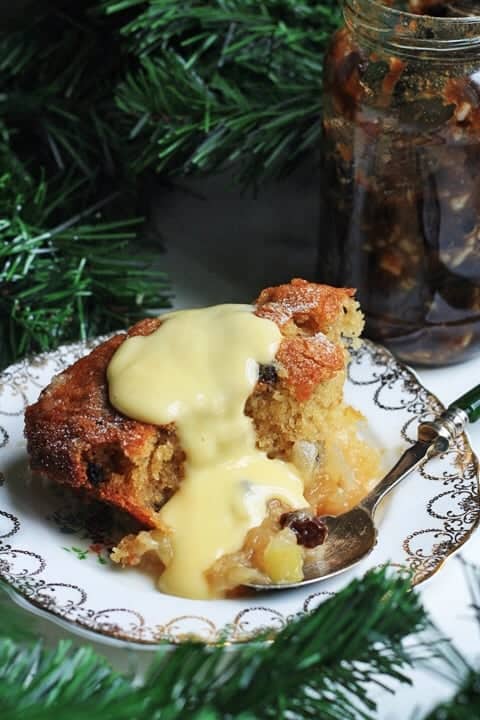 If you are looking for ways to use up that jar of leftover mincemeat then look no further than this recipe.

I am a mincemeat fiend. Making the mincemeat is one of my very favourite cooking jobs to do. It fills my kitchen with the heady scent of brandy, plump fruits and warming spices.

It’s pretty telling that I have several mincemeat recipes on this blog and each one I try to make every year:

So it perhaps comes as no surprise that I usually have a lot knocking around my kitchen throughout the season. It’s an incredibly versatile festive ingredient though so don’t worry if you’ve made too much. I’ve got your covered.

I have to say though this Bramley Apple and Mincemeat Pudding is just about my favourite way to use mincemeat. The tartness of the Bramleys give a lovely contrast to the sweetness of the mincemeat. Plus, it’s:

Some Christmas desserts have the propensity to be a bit of a faff but this pudding takes moments to mix up and bake, perfect for cold nights in front of the fire.

Plus it works with every single mincemeat I’ve ever tried: shop bought or homemade, suet or suet-free. 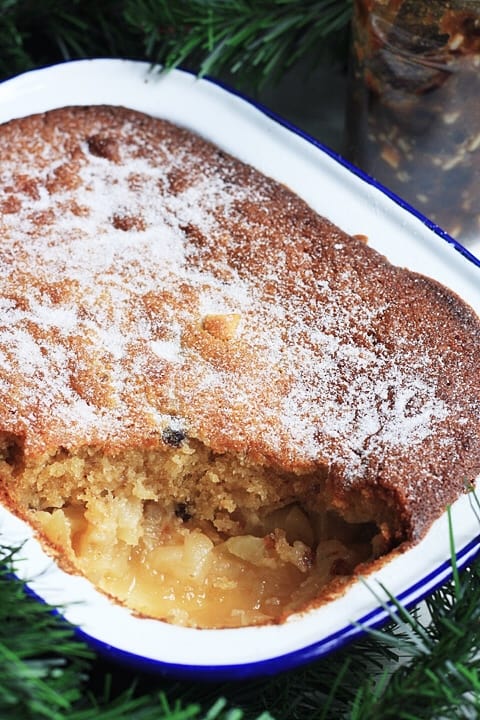 Other recipes to use up leftover mincemeat

However this Bramley Apple and Mincemeat Pudding is not just the means to the end of a jar of mincemeat though. It can be an excellent dessert choice for the big day itself.

If you know you have some Christmas Pud haters at your festive feast this year then this pudding is guaranteed to be a people pleaser.

Do you need more alternatives to the traditional Christmas Pudding?

1. Mix diced bramley apples with sugar, lemon zest and juice. Pour into a buttered baking dish and set aside. 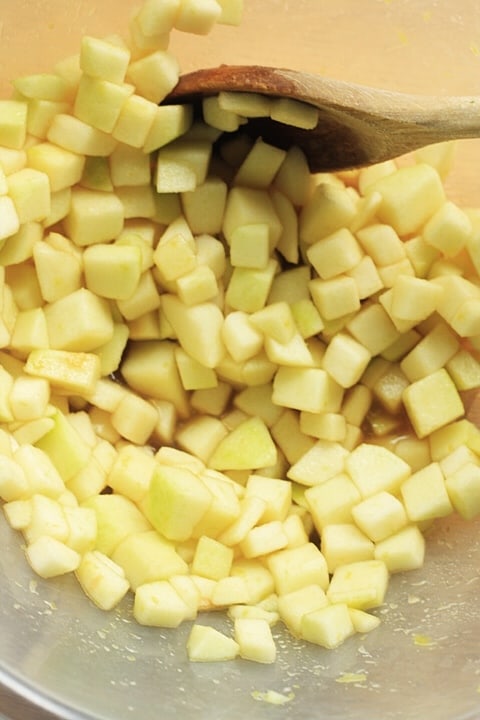 2. Cream the butter and sugar.
3. Add the eggs.
4. Stir in the vanilla extract and mincemeat.
5. Sift the flour with the baking powder and salt and mix with the rest of the ingredients.
6. Stir in the milk. 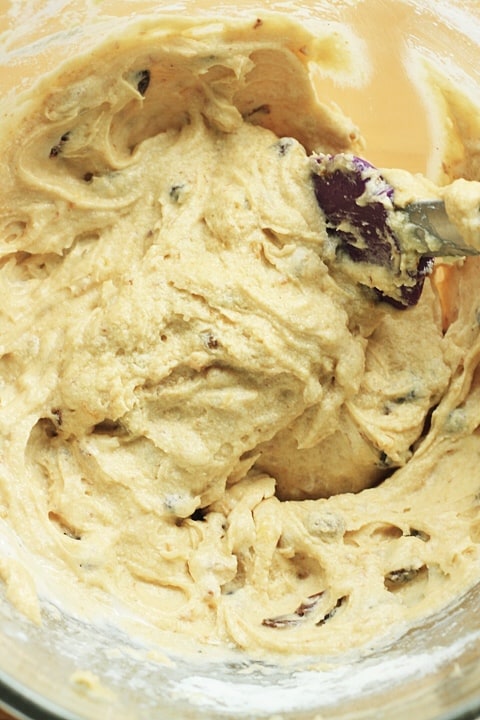 7. Pour the batter on top of the apples. 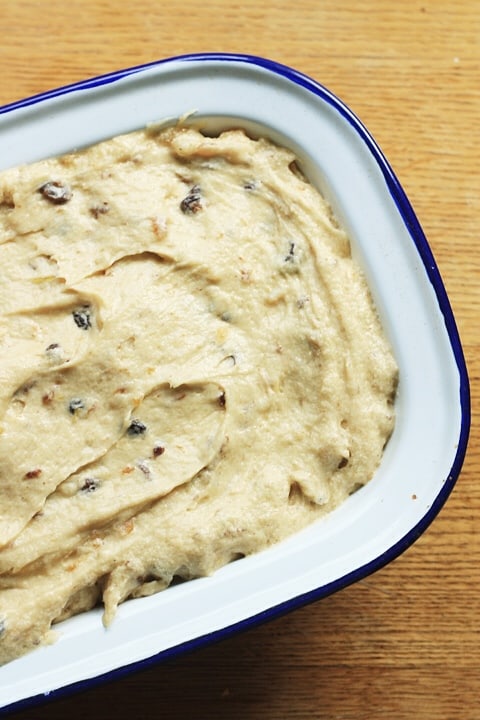 8. Bake for 45 minutes in an oven pre-heated to 170°C
9. Sprinkle over caster sugar. Serve warm with custard. 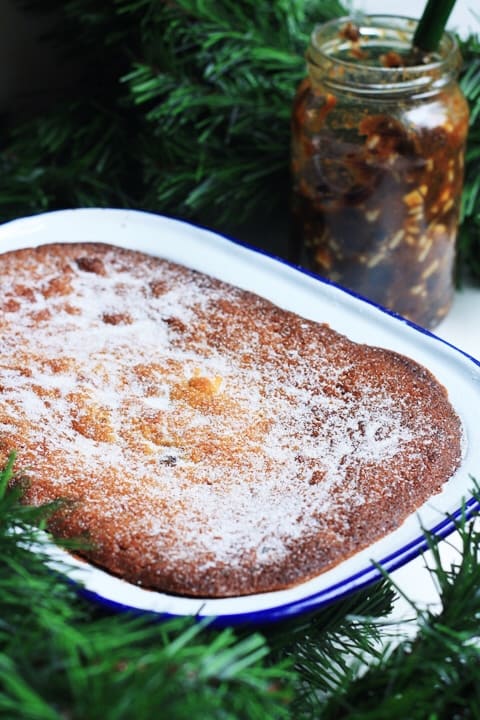 How to Make Gluten-Free Bramley Apple and Mincemeat Pudding

This recipe was developed before I became gluten-free but since I couldn’t bear to live without it once I made my lifestyle switch I quickly came up with a gluten-free version.

The recipe is exactly the same but instead of 150g plain flour, whisk up the following blend of flours:

The result is amazing and just as fluffy and deeply delicious as the original recipe. 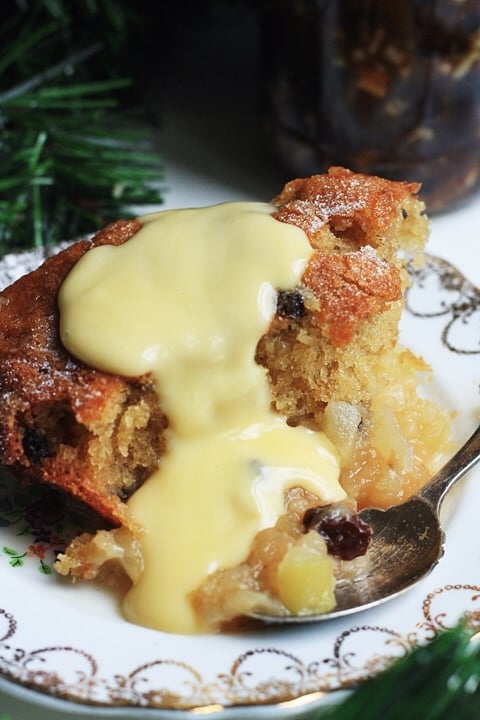 How to serve Bramley Apple and Mincemeat Pudding

If you make this Bramley Apple and Mincemeat Pudding then please leave a comment below and/or give the recipe a rating. If you then go on to use this recipe as a launch pad for your own baking creation then I’d also love it if you’d share it and tag me on Instagram. It is so lovely for me to see your versions and variations of my recipes.

My parting words: Be adventurous with your mincemeat!! 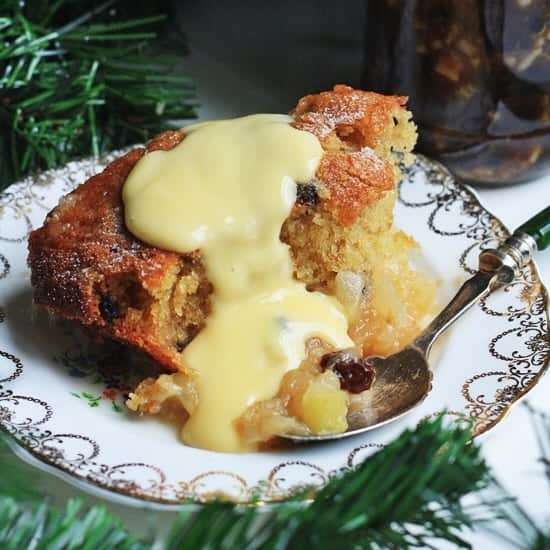 Update Notes: This post was originally published in December 2014, but was republished with clearer instructions and tips in July 2019.