This Ice Cream Cone Recipe is incredibly quick to make and utterly delicious. A light buttery biscuity cone made with gluten-free flours which enhance the flavour of your ice cream. These cones are an absolute treat – never mind the ice cream!! 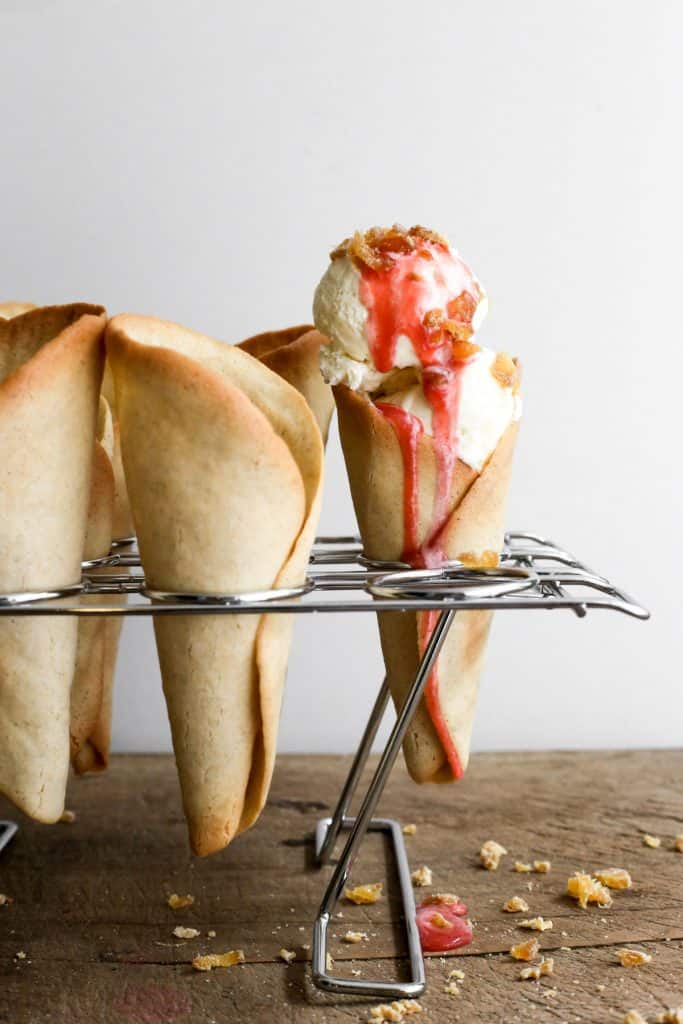 Going out for ice cream with the boys is such a treat. All four of us have a weakness for it and we are so lucky that recently a fancy new gelateria has opened up five minutes from our house. Lucky but also a little bit dangerous.

This ice cream cone recipe has a sort of ‘choose your adventure’ element to it. Depending on which flavour you are serving in your cone you can customise the gluten-free flour to best match your ice cream.

These gluten-free ice cream cones are so easy to make and I’ve got all the tips to help you make them perfectly first time.

What are ice cream cones made of?

Here we are switching out the flour for two alternative flours which will enhance the flavour of the cone and make it gluten-free to boot.

We don’t want to skip the melted butter which gives a delicious rich biscuity flavour. Nor the egg whites which give lightness to the cone whilst holding it together. The sugar gives a little sweetness so it’s just like holding your ice cream in a light crisp biscuit.

Finally we want to include some vanilla extract and a pinch of salt for flavour. 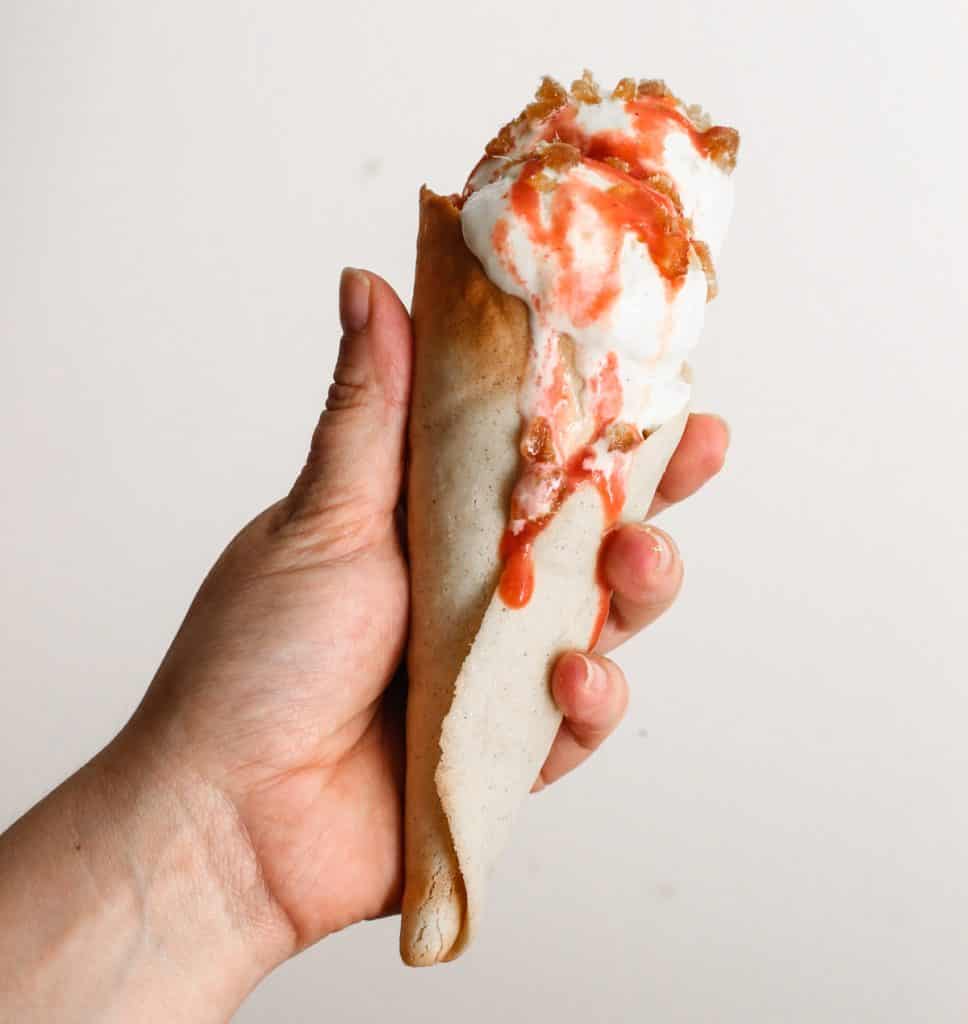 For a go-to ice cream cone which will taste delicious with any ice cream you pair it with then the best gluten-free flour to use is sorghum flour.

We also need a bit of tapioca flour whisked into the sorghum flour as the starchiness is needed to hold the cone together and give it a little bit of elasticity. 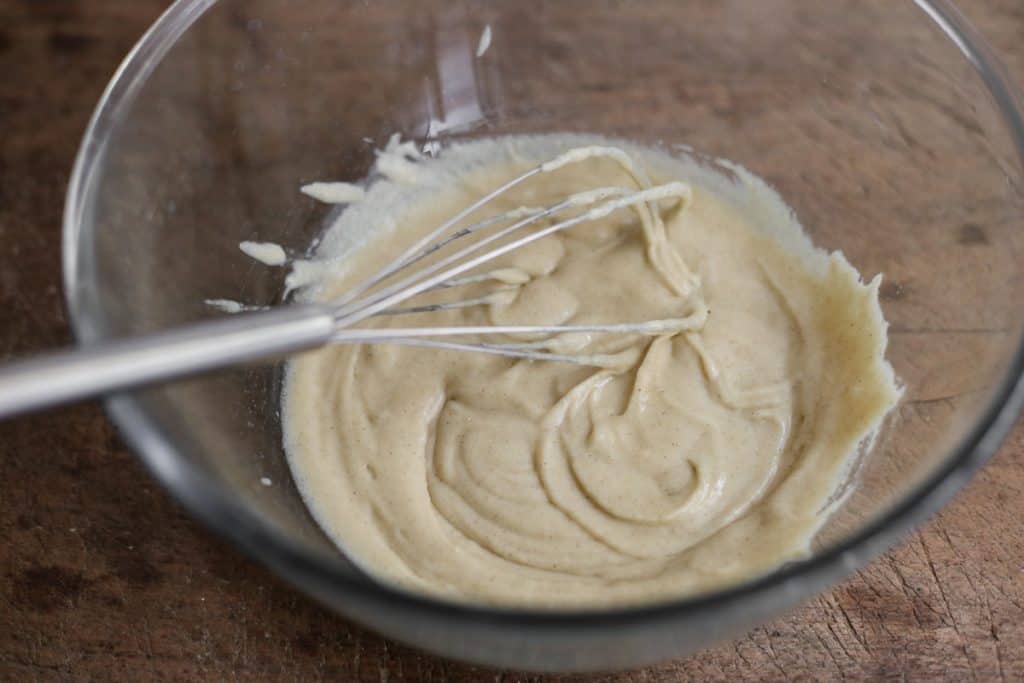 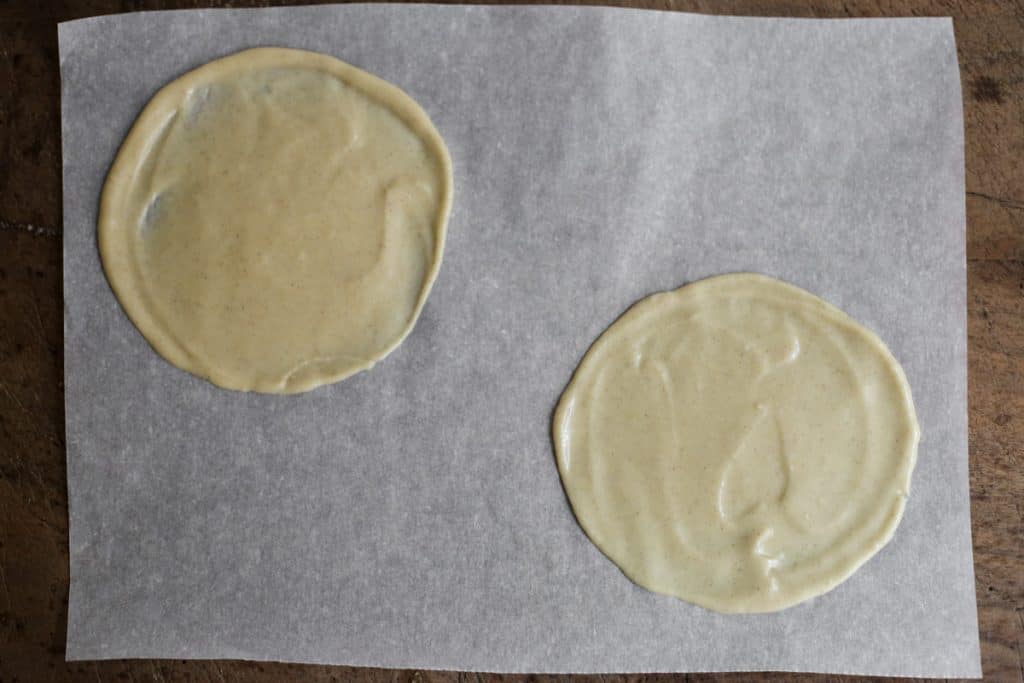 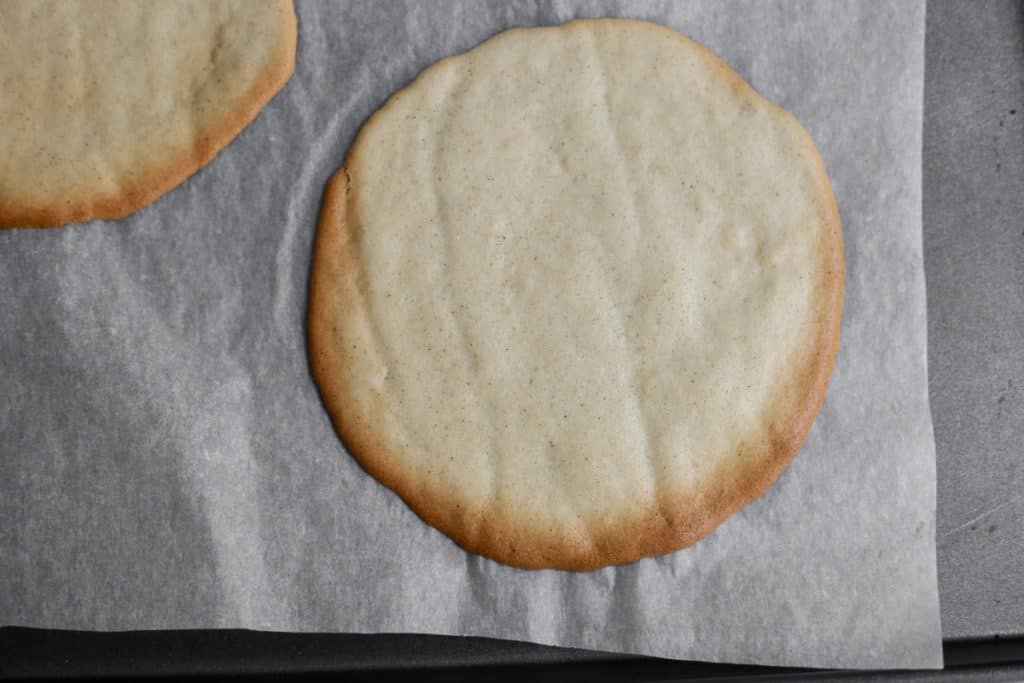 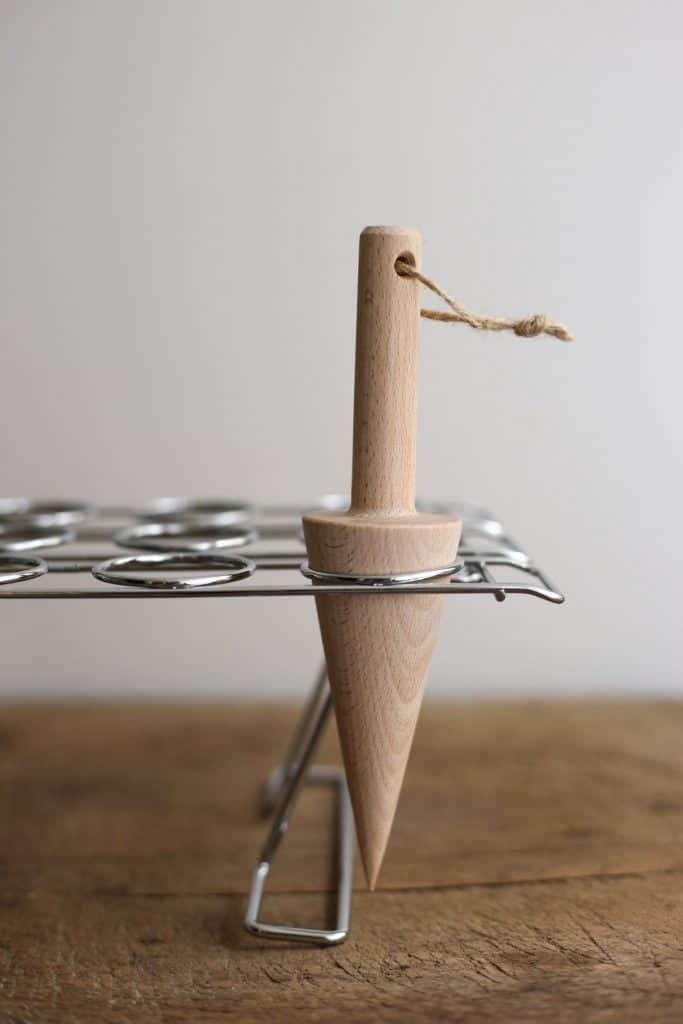 The tapioca flour is essential to all the ice cream cone flavour variations but the sorghum flour can be switched out for numerous different wholegrain flours, depending on the ice cream flavour you wish to serve them with.

Make a batch of ice cream cones and store them in an air tight tin for up to a week. They taste best for the first couple of days after baking. 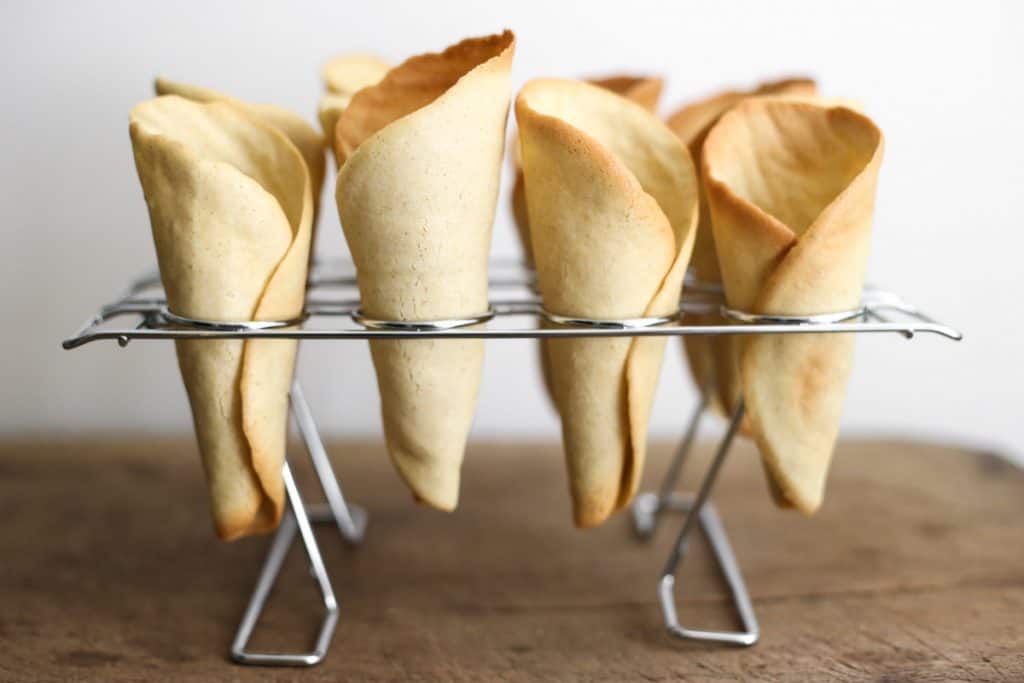 Can you freeze ice cream cones?

You can. My favourite way of doing it is to fill your cone with ice cream, drizzle on some toppings then wrap loosely in greaseproof paper. Store carefully in the freezer and you have an instant ice cream cone. Best to eat within a week though.

Now, do you need some ice cream recipe inspo for your cones?

If you make this Ice Cream Cone Recipe then please leave a comment below and/or give the recipe a rating. If you then go on to use this recipe as a launch pad for your own baking creation then I’d also love it if you’d share it and tag me on Instagram. It is so lovely for me to see your versions and variations of my recipes. 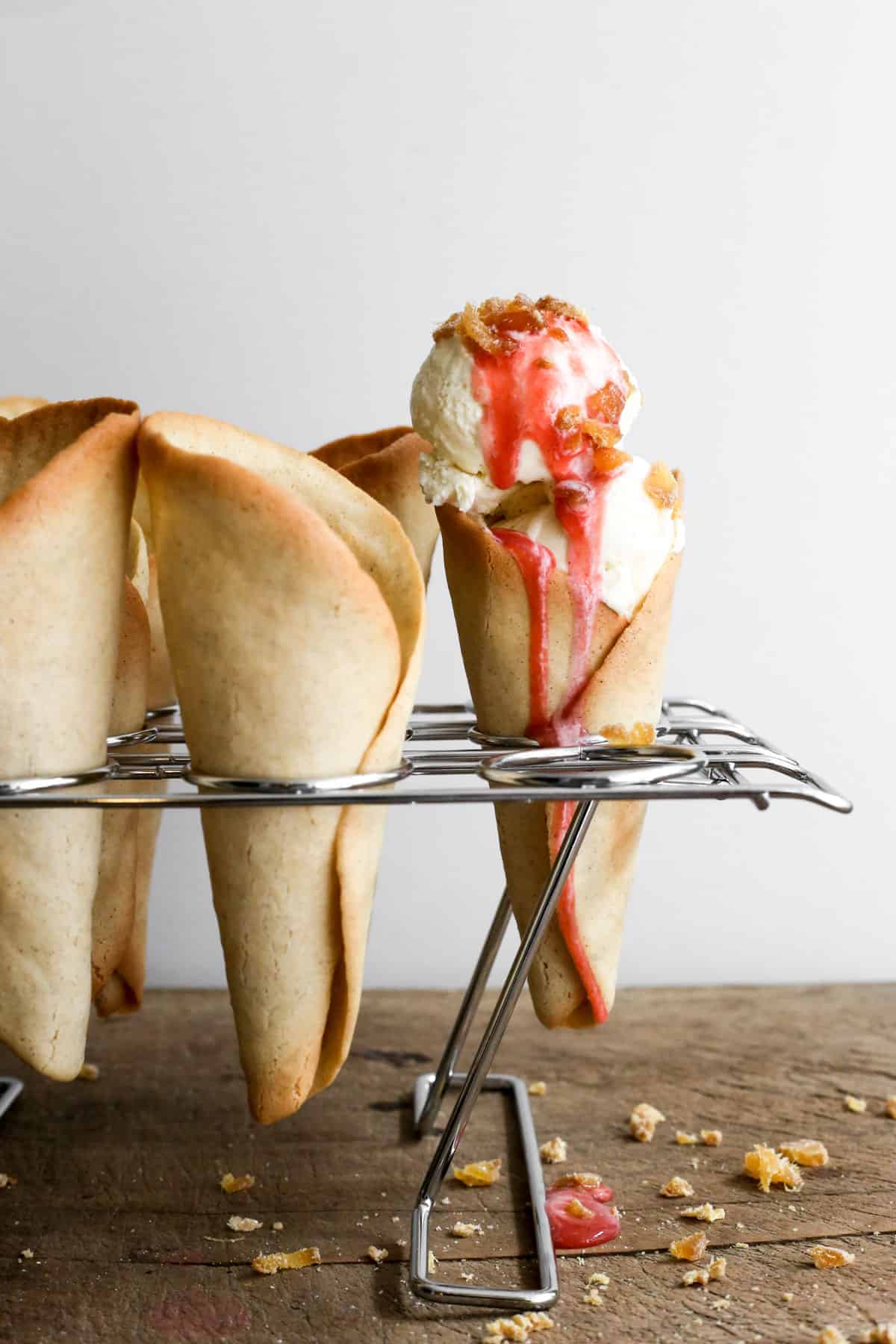 You can customise your ice cream cone by swapping out the sorghum flour for another wholegrain flour of your choice. Try teff flour, buckwheat or oat flour.
• Do rest the batter. You can even make the batter up to 1 day in advance and keep in the fridge until ready to use.
• For uniform cones draw two 12cm circle on the greaseproof paper so you can make sure you are spreading your batter out to exactly the right size.
• Don’t overbake the cones, if they are overbaked they will crisp to much which will make them difficult to mould.
• Work as quickly as you can whilst shaping your cones. The more you do the faster you become. It’s all about practice.
• I tried using everyday kitchen utensils to mould the cones but had little success. I do recommend buying at least the cone mould which was under £10. The cone holder means that you don’t have to hold the cone in place whilst it is cooling. If you plan on making ice cream cones regularly then the right equipment is essential.

Calories: 221kcalCarbohydrates: 39gProtein: 3gFat: 7gSaturated Fat: 4gCholesterol: 16mgSodium: 123mgPotassium: 71mgFiber: 1gSugar: 19gVitamin A: 185IUCalcium: 4mgIron: 0.6mg
Have you tried this recipe?Head to the comment section and let me know what you think!