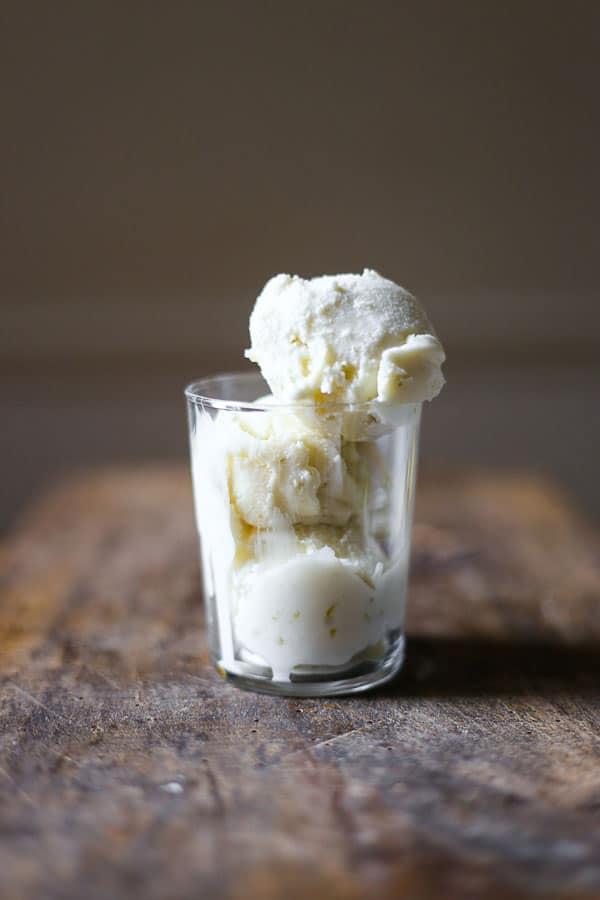 For a time I was convinced my calling was in ice cream. This wasn’t the same time I thought my vocation was to become a chocolatier, although a part of me is still a little frustrated that I didn’t pursue either path. After I quit my job as a TV producer and before I began this blog and my market stall I spent a summer making a lot of ice cream whilst I pondered upon my future.

Most nights I was whipping up a batch of sweet custard or cream whilst I wedged my ice cream bowl into the freezer. In the morning, in my pjs, the first thing I would do would be to churn my efforts. Ice cream for breakfast was pretty normal during that lazy hazy August of 2013. Our freezer was chock-a-block with all manner of flavours. 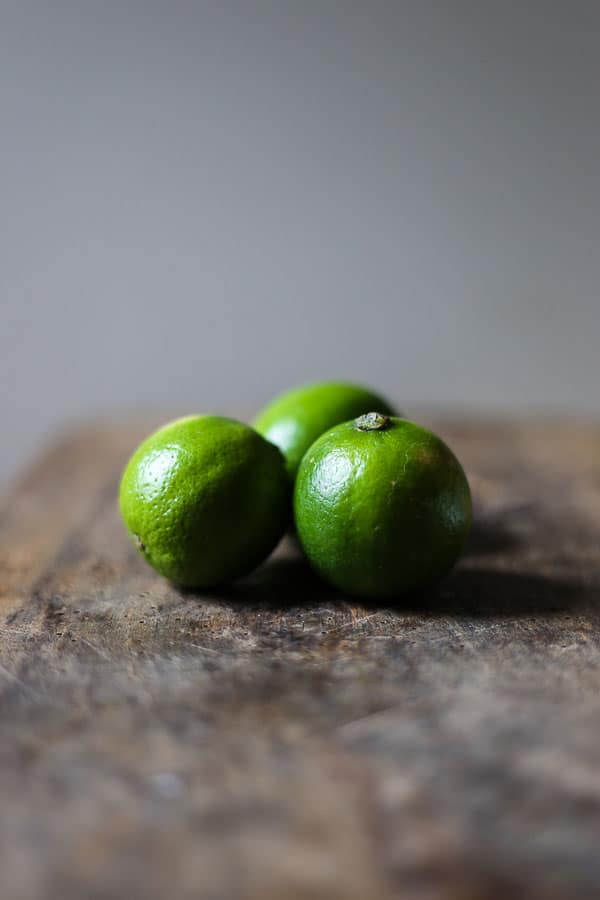 My favourite ice cream of this period was definitely David Lebovitz’s Salted Butter Caramel Ice Cream which I made all the time. Luke and I would sit on the sofa, a tub of it between us and demolish the lot. I developed my own spin off recipe based on it which is my Butter Mint Ice Cream which is like a frozen creamy murray mint. Truly outstanding.

But I haven’t made ice cream for a while. About two years. It’s funny the things I haven’t done in two years there must be some correlation.

Ice cream is a pastime that needs a bit of pre-planning which I’m currently not so good at. I’m lucky if I have unstained clothes in the morning, bread for toast and the dishwasher was put on overnight. The rest of the day is a blur of fire-fighting. But with ice cream your ice cream base has to be made the day before and the churning bowl needs to be put in the freezer to get to the right temperature before churning. 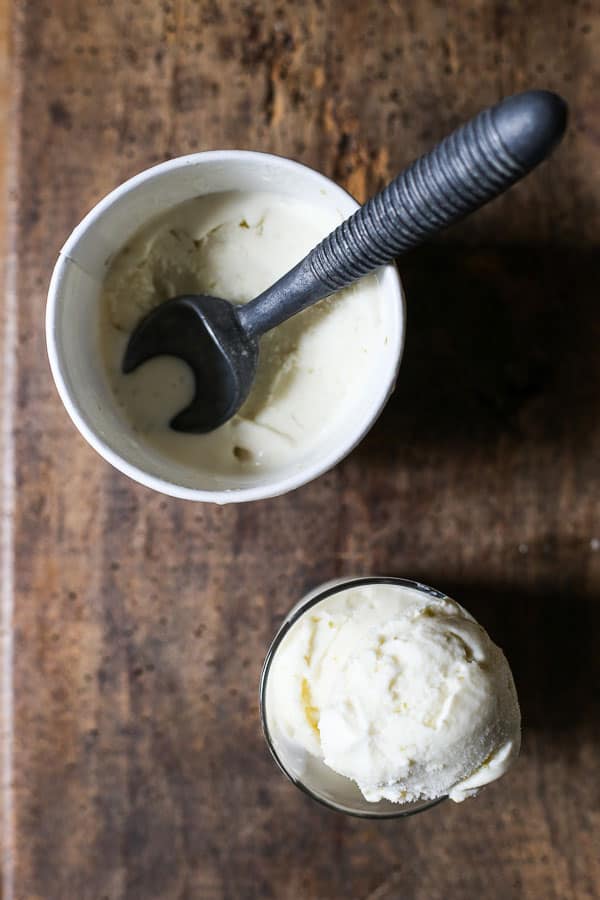 I’ve been having cravings lately though. Ice cream tastes so much cleaner and lighter when it’s homemade. But it’s the process of making ice cream which I love and have been longing for. The gentle heating of milk, custard or cream, infused with an infinite possibility of flavour. The anticipation as the mixture cools and then the joy of churning it into actual ice cream as its sweet frostiness permeates the kitchen. The first cheeky taste of the ice cream when it is only just coming together in gentle mounds is a perfect teaspoon. A bowl of ice cream which I made from scratch still feels like such a clever and sophisticated achievement.

The recipe for the base of this Tequila Lime Ice Cream jumped out at me by chance last week when I was leafing through my Kitchenaid cookbook which was a freebie with my Kitchenaid mixer years ago. It’s a bit of a random cookbook but I some of the recipes are nicely put together. 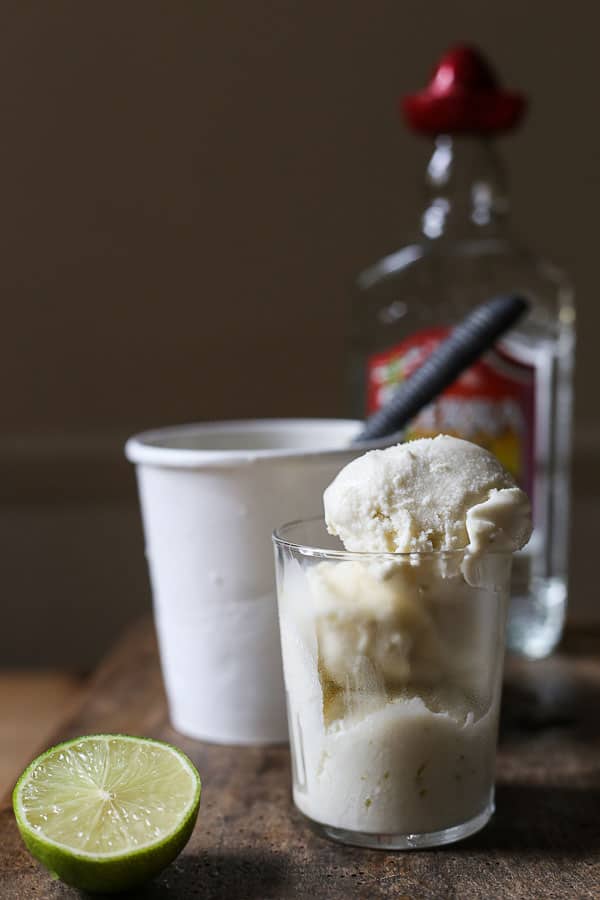 I had been knocking around with the idea of a Tequila Lime Ice Cream for ages, being a bit wishy washy as to whether I wanted a coconut or banana base. A gelato base would be fabulous, using only whole milk, but so difficult to achieve at home. Then I saw a Lime Ice Cream recipe in the book which used mainly coconut milk and a little bit of double cream. A brilliant idea. So effortless and incredibly effective with no worry of crystallisation due to the healthy fat content. The ice cream is guaranteed to be creamy, no mean feat in a domestic environment.

The ice cream takes fewer than 15 minutes to prepare the day before. I didn’t even bother with the ice bath, often needed to cool the mixture down quickly to prevent crystallisation, but just put it straight into the fridge to chill on its own terms. Then with just 30 minutes of churning the next day the work is complete. The ice cream does need a few hours of setting in the freezer afterwards to achieve the right consistency but it was absolutely no bother. 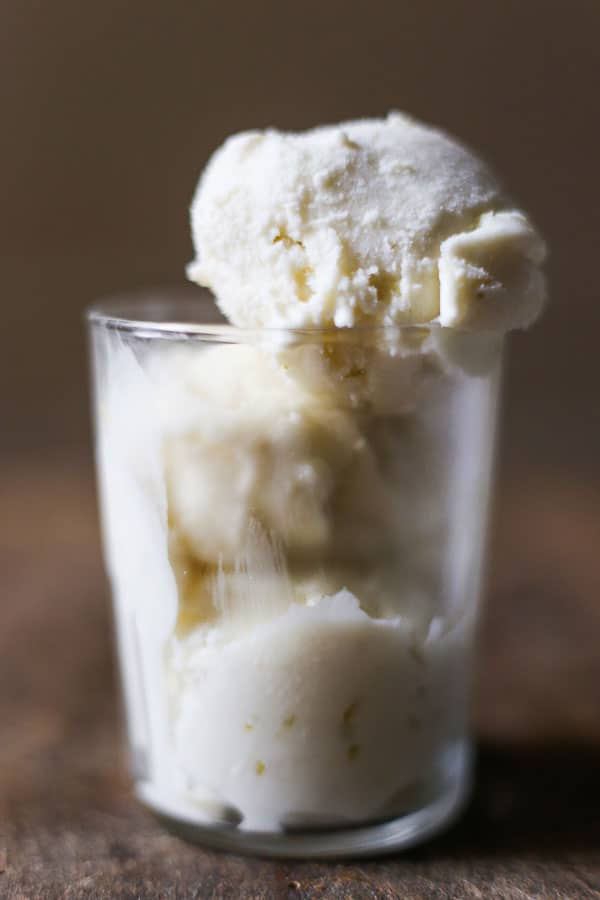 The taste of coconut isn’t overpowering as it is tempered by the double cream. It’s completely refreshing but then made even more so by the tantalising zing of lime. The drop of tequila added just at the end of churning is fresh and sparky without calling attention to itself.

This is a great start to ice cream season, I know I’ll be using the base of this recipe again and again and have already commandeered the bottom shelf of our freezer for purely ice cream purposes. It’s like the summer of 2013 all over again. 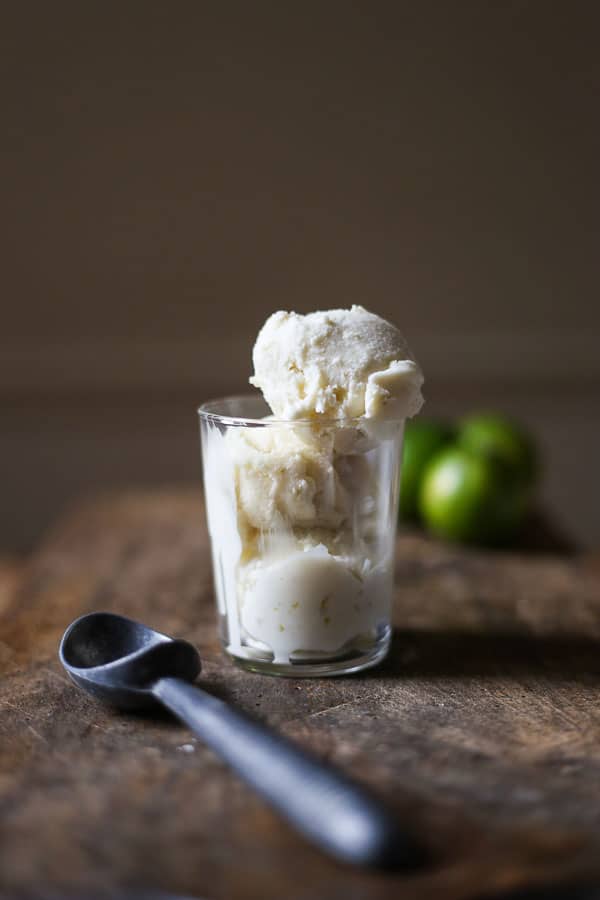 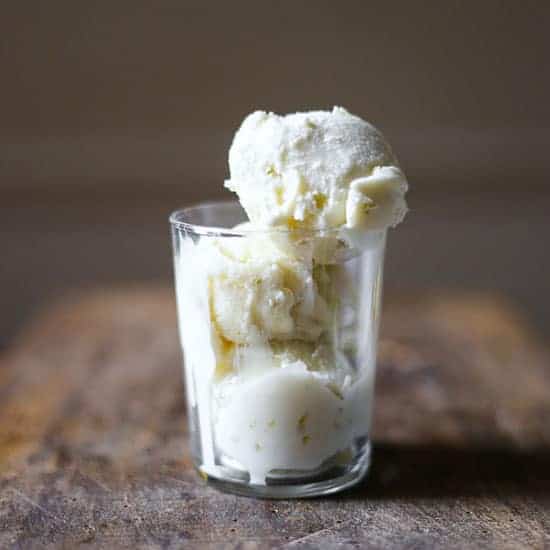 Calories: 536kcalCarbohydrates: 43gProtein: 3gFat: 40gSaturated Fat: 30gCholesterol: 69mgSodium: 33mgPotassium: 275mgSugar: 38gVitamin A: 735IUVitamin C: 5.8mgCalcium: 50mgIron: 3.3mg
Have you tried this recipe?Head to the comment section and let me know what you think!

Many years ago Luke tried to persuade me than I didn’t need yet another space hogging kitchen gadget that I didn’t use so I bought my ice cream maker on the sly. I honestly haven’t looked back and have been thrilled to reach down for it again and put it back to use. I chose the Magimix Le Glacier 1.5 litres on a whim but it’s been absolutely brilliant and was very reasonable so I heartily recommend it.