Blackberry Ripple Ice Cream is amazingly light and creamy made from a base of Italian meringue and whipped double cream shot through with a burst of fruity blackberry. 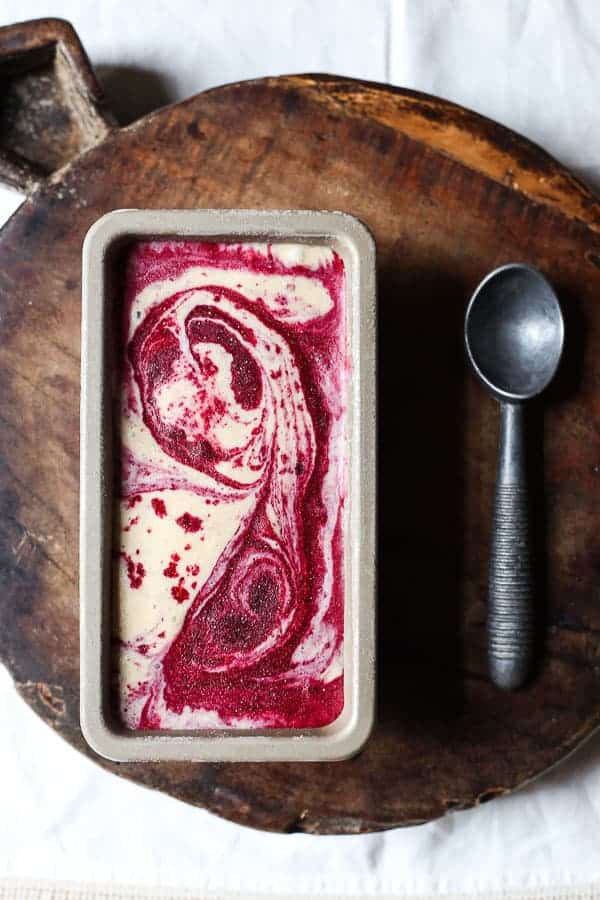 This recipe is an update from the Blackberry Ripple Ice Cream I posted in 2014 which I now make every blackberry season without fail. Because of the base method I do find it an incredibly easy ice cream to manage without the risk of any ice crystals forming. The blackberry ripple is sweet and tart with immense fruity flavour contrasting with the smooth and creamy ice cream. 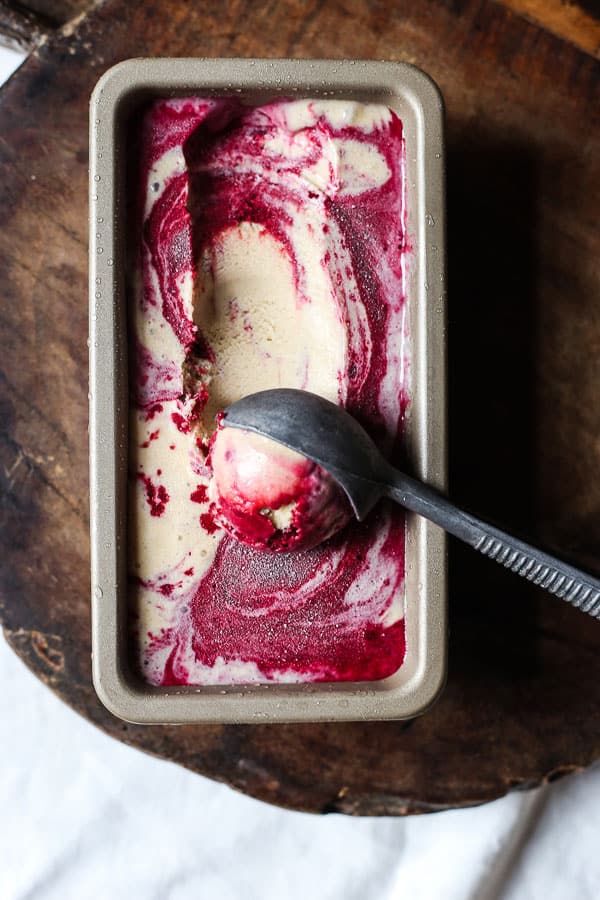 I originally adapted the recipe from one of my father's old Taste Magazines from the 1980s. I love looking through these magazines, it's amazing how much food photography and writing has changed. There are fewer pictures in the magazines and styling and lighting has changed a lot so much so that the food itself doesn't look terribly appealing from the photographs. If you look past the dusty images and focus on the recipes themselves though there are some true gems and this ice cream was one of my favourite discoveries. 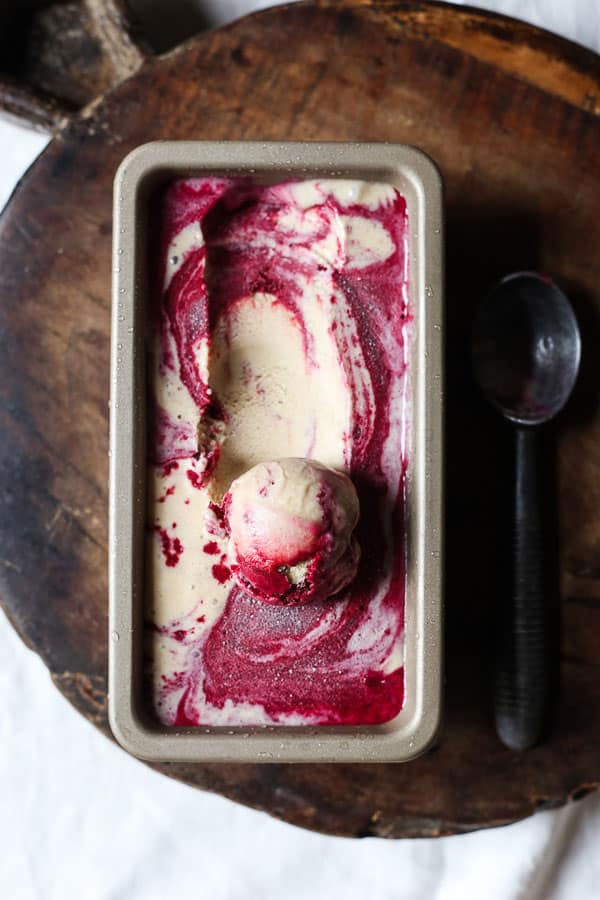 This Blackberry Ripple Ice Cream recipe was a bit of a revelation for me in terms of ice cream making. I love homemade ice cream but sometimes I can’t be bothered with the hard-set stuff, the kind that you have to take it out from the freezer for 20 minutes so that you don’t snap your spoon in half desperately trying to dig at it. These 20 minutes are always an endless time of frustration for me. Blackberry Ripple Ice Cream though is proudly soft scoop. If you fancy a teaspoon of ice cream whilst you are waiting for the toast to pop up then this is ideal. Luscious and creamy direct from the freezer. It achieves the soft set by adding liquid glucose to pureed blackberries which helps the crystallisation of the sugar and also protects the fruit, as without the sugar the blackberries would freeze solid. The ice cream base is made by whisking egg whites and drizzling in a sugar syrup to form a fluffy meringue which is what gives the ice cream its texture. Billows of double cream are then folded through, giving the ice cream richness.

When it comes to the blackberries one of the things I am a bit of a stickler about is the preparation of the fruit. The seeds absolutely have to be removed. If not the smooth creamy ice cream is marred by the rock hard little pellets you have to keep removing from your teeth. I bought a homemade raspberry ice lolly from the market a couple of weeks ago and the seeds were so overwhelming that it completely ruined the treat for me. I was picking them out of my teeth for the rest of the afternoon and complaining about it to anyone unlucky enough to be in my company that day. 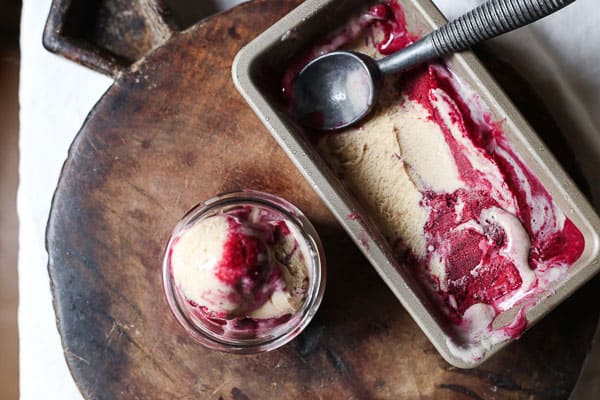 Since I am currently trying to restrict my dairy I have also tried making Blackberry Ripple Ice Cream by switching out the double cream for whipped coconut cream which makes the recipe dairy-free. It worked fine and if you want to make that swap for the same reasons then I do encourage it, it's still a completely delicious ice cream. However, it's funny, I haven't had too hard a time limiting my dairy intake at all and didn't miss it nearly as much as I thought I would. Ice cream though is proving my downfall. I can certainly be satiated with sorbets and ice creams made from frozen bananas or coconut milk but when you taste this ice cream as it is intended with the whipped double cream then it's nigh impossible to succumb. 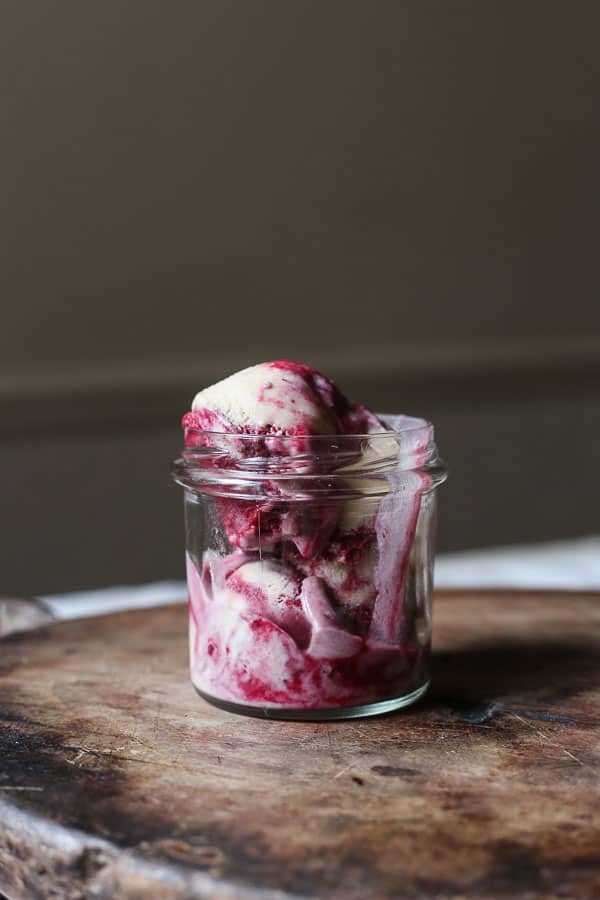 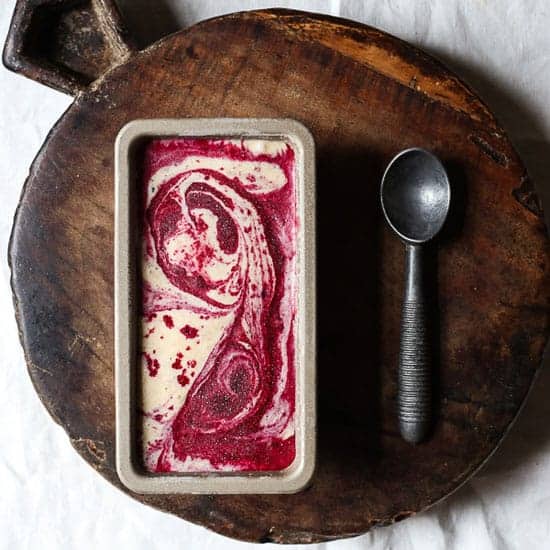