Damson Orange Cinnamon Jam is the perfect bridge between summer and autumn. The last of summer’s stone fruits are infused with the warming spices of cooler days.

Plums and damsons signal the last of the summer fruits as autumn looms on the horizon and I am winding down with all my local foraging. This is when my kitchen is at its busiest. Fruits and vegetables that haven’t yet made it into cakes, crumbles or suppers are now being canned, jammed and chutnied.

I have written about our family’s love of foraging several times before in this space and we were very excited that this year Cole was able to properly join in. The blackberry picking was a little precarious for him due to the prickles on the brambles and the stinging nettles which swarm around the hedgerows to protect the berries. Apples also were somewhat fraught as both toddler and dog kept attempting to run under the treacherous apples which showered down every time Luke shook the tree to dislodge the ripe fruit at the top.

Damsons on the other hand were a little more manageable. Cole loved picking the fallen fruit and helping Mummy put them into the hefty foraging bag. I was surprised how helpful he was. Yes, so I then had to be extra careful picking through the damsons when we got back home as he wasn’t so discerning as mummy and daddy over which fruit should make the grade. But it was almost like having an extra pair of hands. Surely it’s only a matter of time before he can take the rubbish out, unload the dishwasher and do a spot of hoovering.

As a result Damson Orange Cinnamon Jam is making its debut this weekend on the market stall. I’m joining the new Stroud Green Market which is launching this Sunday and I’m really excited. Our area hasn’t had a farmers’ market before, usually we have to drive a little distance to Alexandra Palace so I’m hoping everyone in the area, like me, will be welcoming the market with open arms. I thought there was no better way to show support for this new venture than having a stall there myself. I’ll be selling my gluten-free cakes and also launching my autumn collection of preserves.

This will be the first weekend I’ve had the preserves on the stall this year so I can definitely feel the change in the season. I always mean to produce my jams, chutneys, relishes, pickles, ketchups and jellies all year round but I never quite manage to pull my act together. I even thought about discontinuing the preserves which I wrote about in an earlier post but my joy in foraging and canning got the better of me again this summer and suddenly I found I had hundreds of jars which needed shifting.

I haven’t sold my Damson Orange Cinnamon Jam since my first preserves stall three years ago. Two years ago I had just had Cole so my foraging was scant and then last year our local damson trees didn’t seem to fruit all that well. This season though the fruit was juicy and plentiful. I swear each tree bears enough fruit for every household in Stroud Green to collect a few kilos. 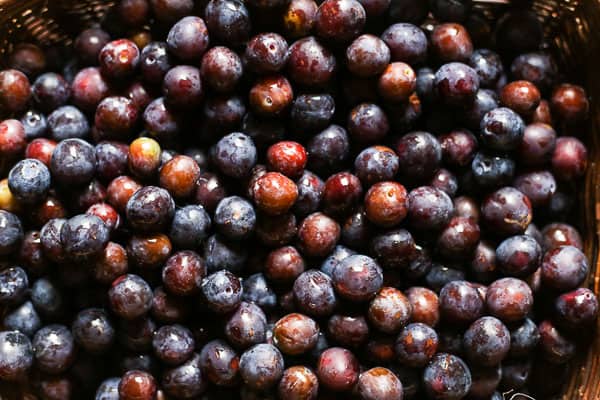 Damsons are smaller cousins to the plum and there are more trees around to forage from than you would think. Just look for the squashed purple fruit underfoot around late August September and you’ll probably find you’re standing beneath a damson tree. They are easy to collect, when the fruit is ripe just a shake of a branch releases a plethora of damson raindrops which can be collected by an artfully placed upturned umbrella already positioned underneath the chosen branch. I wouldn’t recommend eating damsons straight off the tree though as they are rather sour. Like many foraged fruits once sugar is added they come to life. They are fiddly to prepare as they have stones which are too tricky to part from the flesh in their raw state so I suggest cooking the damsons down first and then sifting through the pulp to collect the stones. 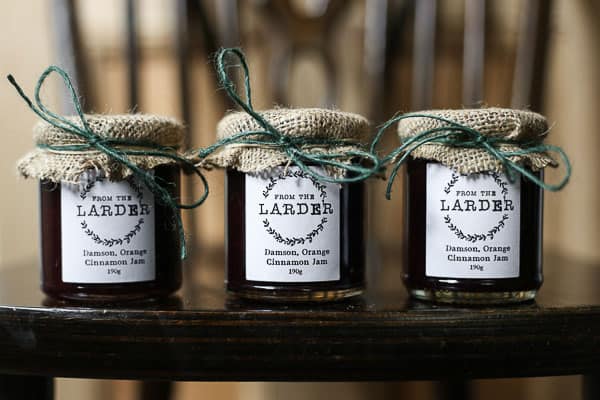 Damson Orange Cinnamon Jam is one of my favourite ways to preserve them. The orange and cinnamon notes are delightful this time of year as the evenings draw in and the scent of warming spices lure you in from the chilling weather. I’m looking forward to having the jars for sale at the market stall this weekend and if you’re in the area I hope you can pop by. 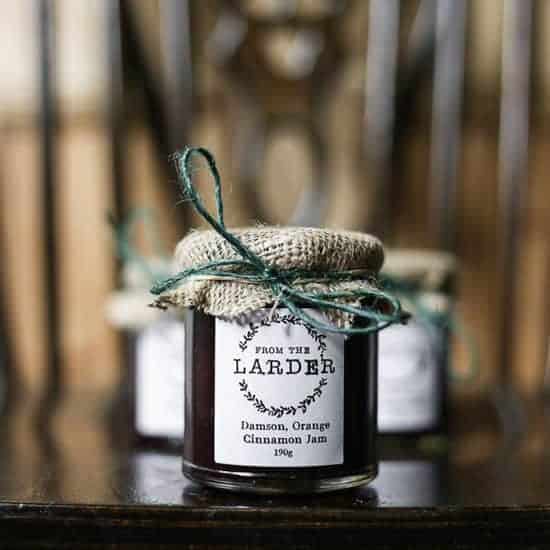 *The saucer wrinkle test basically requires you to put about 5 saucers in your freezer when you begin making your jam. Once you think the jam might be ready then you can double check by removing a saucer from the freezer, dropping a teaspoon of jam on it then placing the saucer in the fridge. After about 30 seconds remove the saucer and push the jam with your finger. If it wrinkles up it’s ready, if it just pools back into the space your finger has left then it needs more bubbling time. Boil it another couple of minutes then turn off the heat and then test again with another saucer. *To sterilise the jars place the very clean jars you would like to use in an oven pre-heated to 140°C for 20 minutes. Sterilise the lids by dropping them into a saucepan of boiling water for 10 minutes with a splash of vinegar. I don’t sterilise my lids in the oven as they tend to ruin. Yield 12 200g jars

Calories: 15kcalCarbohydrates: 3gPotassium: 27mgSugar: 3gVitamin A: 50IUVitamin C: 2.3mgCalcium: 4mgIron: 0.1mg
Have you tried this recipe?Head to the comment section and let me know what you think!