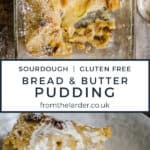 Bread and Butter Pudding is a classic British dessert that has stood the test of time and translates easily to a gluten-free version. Layers of thickly sliced and buttered sourdough bread are slathered with marmalade, scattered with plump juicy sultanas and baked in a richly spiced custard. An incredibly flavourful and comforting homemade pudding which the whole family will love.

During my foray into achieving the perfect Gluten-Free Sourdough Bread I was producing loaves and loaves of delicious bread that still needed slight tweaking here and there.

What can one possibly do with vast amounts of staling artisanal bread? Well there really is only one option, this incredible Gluten-Free Bread and Butter Pudding. Since I was making so much bread I was also churning out loads of these desserts and giving them away to family and friends (which seemed a better offering than half a loaf of sub-par bread). The feedback on this recipe has been overwhelming and I’m so thankful I can now point everyone who has clamoured for it to this wonderful recipe.

And don’t worry it is easy to recreate with any loaf of decent gluten-free bread.

What is Bread and Butter Pudding?

It’s a traditional British dessert where stale bread is buttered, layered in a baking dish, covered with custard then baked. Often the bread can also be spread with a jam and the layers of bread muddled through with dried fruit.

The first recipes for this dessert date back to the 1720s and was made with freshly buttered bread. It was only in the Victorian times that the dish became a means of using up stale bread.

Note. This dessert is not to be confused with Bread Pudding which is quite different as stale bread is mashed up with milk, dried fruit and spices then baked to form a firm pudding.

Watch the video to see how to make it

How do you make a Gluten-Free Bread and Butter Pudding

The only switch this recipe makes from a regular bread and butter pudding is to use a gluten-free bread. The custard and all the other elements of the recipe are naturally gluten-free anyway.

What kind of gluten-free bread do you need?

It can be made with any gluten-free bread but use the highest quality artisanal bread you can find if you are making this dessert especially. If you use homemade bread then you really will be kicking this recipe up a notch.

This recipe uses thickly cut and slightly stale gluten-free sourdough bread which means the layers of bread keep their shape very well when soaked in the custard. It also gives the dessert a unique sour tang which makes for a glorious contrast with the sweet eggy custard.

Homemade bread often stales quicker and is firmer than supermarket counterparts which is worth noting for the final results.

These are the ingredients we need

How to make it

Sultanas. You can soak the sultanas overnight but by heating up the orange juice with the sultanas they absorb the liquid and the flavour very easily.

Bread. Slice thickly. Remove the crusts, cut the slices into triangles and butter generously both sides then slather with marmalade. Create 2 overlapping layers in a baking dish, sprinkling the sultanas throughout.

Custard. Whisk egg yolks and a whole egg with the sugar until pale. Heat the cream and milk with the spices then whisk into the eggs. Pour the custard over the bread.

Rest. Allow the bread to absorb the custard by resting for at least 2 hours or overnight.

What to serve with it

This Sourdough Bread and Butter Pudding is incredible if you serve with any of the following:

This is a great dessert for making ahead. You can assemble the whole dish including when you pour the custard over the bread layers. At this point you can cover the dish and keep in the fridge for up to 2 days before you bake it. The longer you keep it the more custard the bread will soak up so it will be a firmer finished result. Bake in exactly the same way as the recipe instructs.

Once baked it is best to store the gluten-free bread and butter pudding covered in the fridge. You can keep in the baking dish if you have room then you can simply stick the whole dish back into the oven to reheat. Or you can transfer to airtight containers.

If you want to freeze this sourdough bread and butter pudding then cool completely after baking. Cover the whole dish with a double layer of cling film then tin foil and place in the freezer for up to 2 months.

To defrost, leave on the kitchen counter overnight before removing the cling film and foil and re-heat as above.

If you are freezing leftovers then you can freeze portions in airtight containers for up to 2 months. Defrost overnight on the kitchen counter. For portions it is better to re-heat in the microwave otherwise it will dry out in the oven.

How to make it dairy-free

All you need is to make a couple of substitutions:

Note. Do make sure then that the bread you are using is also dairy-free.

Variations on the recipe

Chocolate Chip Bread and Butter Pudding. Omit the orange soaked sultanas and use dark chocolate chips instead. Keep the marmalade for a luscious orange flavour.

Cranberry and Pecan Bread and Butter Pudding. Swap the marmalade for cranberry sauce and use roughly chopped pecans instead of sultanas.

Brandy Apple Bread and Butter Pudding. Omit the marmalade and instead spread a layer of apple sauce at the base of the dish and then in the middle of the two bread layers. Soak the sultanas in brandy instead of orange juice.

I urge you to give this Gluten-Free Bread and Butter Pudding a try. If you do then please leave a comment below and give the recipe a rating which helps others find the recipe on Google. If you then go on to use this recipe as a launch pad for your own culinary creation then I’d also love it if you’d share it and tag me on Instagram. It is so lovely for me to see your versions and variations of my recipes. 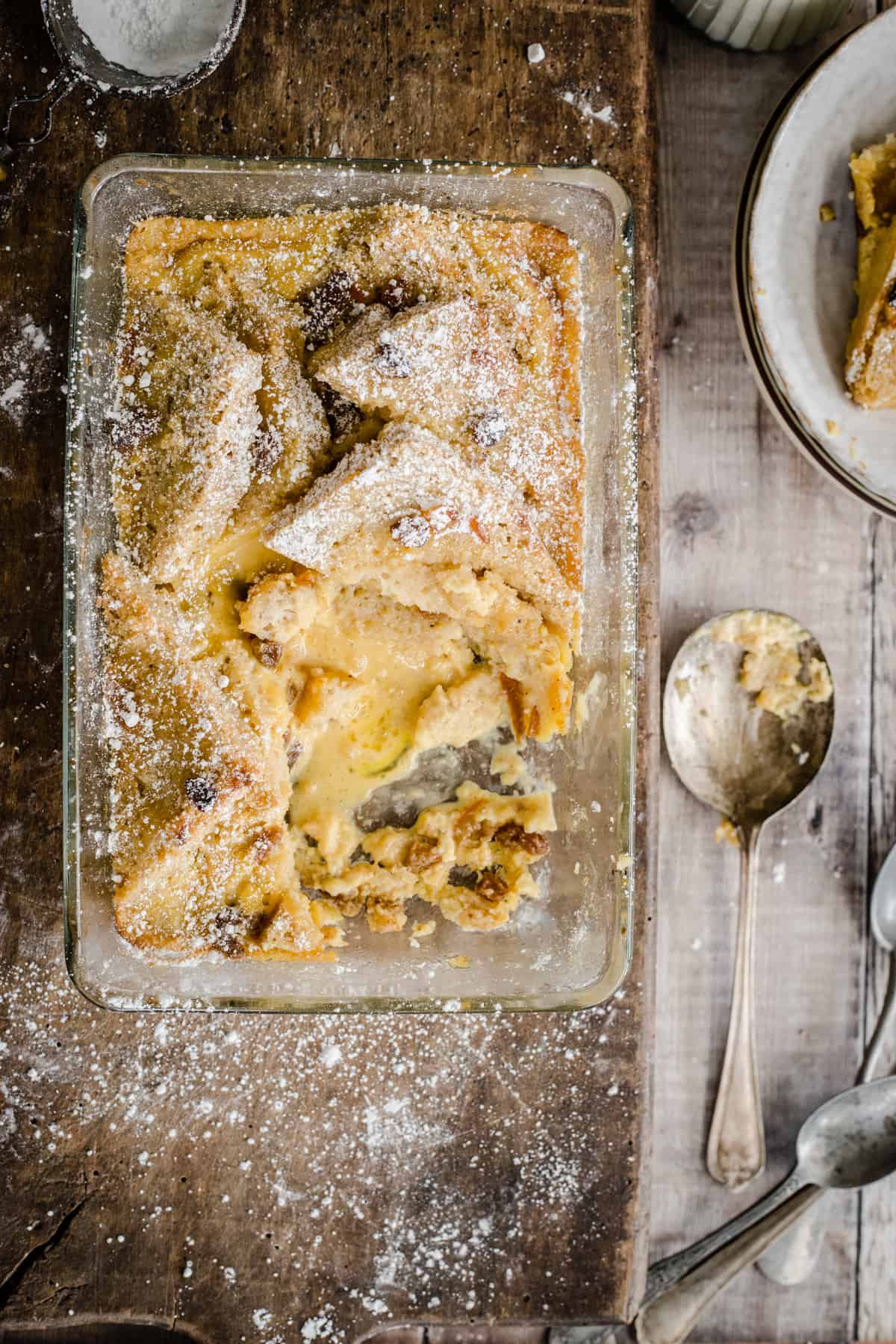 You can assemble the whole dish including when you pour the custard over the bread layers. At this point you can cover the dish and keep in the fridge for up to 2 days before you bake it.

If you want to freeze the whole bread and butter pudding then cool completely after baking. Cover the whole dish with a double layer of cling film then tin foil and place in the freezer for up to 2 months.

Leave on the kitchen counter overnight before removing the cling film and foil and re-heat as above.