Steamed Chocolate Sponge Pudding with Chocolate Custard is the ultimate in pudding decadence. Warm and sticky gluten-free chocolate pudding steamed on the stove top then served with lashings of rich chocolate custard. 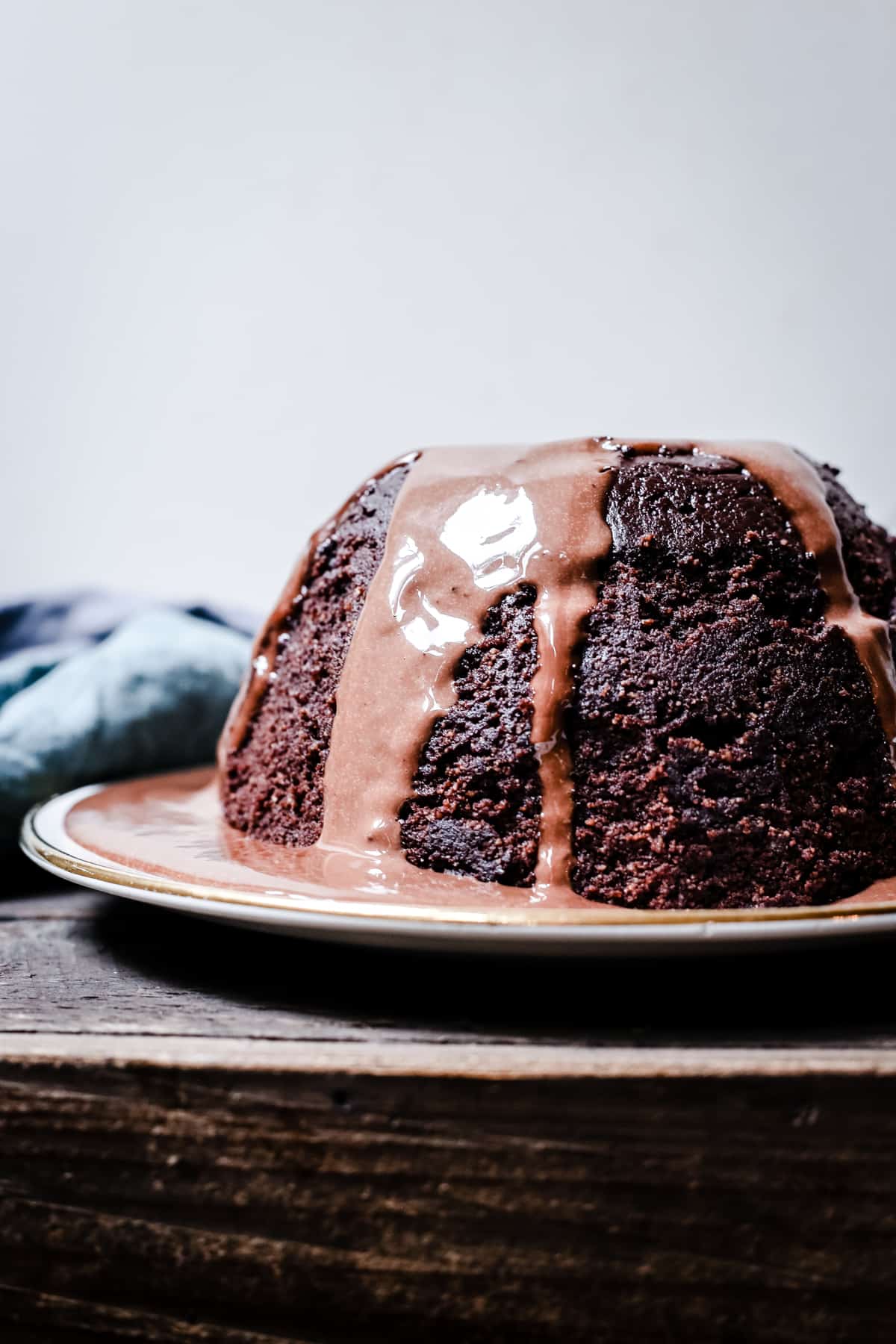 This Steamed Chocolate Sponge Pudding with Chocolate Custard takes me right back to childhood. I have been craving it for weeks but my irritating lack of time lately has meant the recipe has just sat taunting me on my laptop every time I switch it on.

It was a pudding which was on constant rotation during school dinners at my primary school and I have been longing to recreate it in my own kitchen. I went to a small country primary school of only a hundred children. The school itself was just one small building with no separate dining room.

We would all be seated on large tables of about 10 children, laid out in the assembly room through to the three classrooms, which were all more or less open plan. The dinner ladies called up each table one by one to line up for our hot lunch served by two cooks who always looked harassed. One tall and stern and the other short and jolly.

We stood patiently at the front of the assembly room as they stood behind their trolleys dolloping out food from metals trays and huge mason cash mixing bowls. 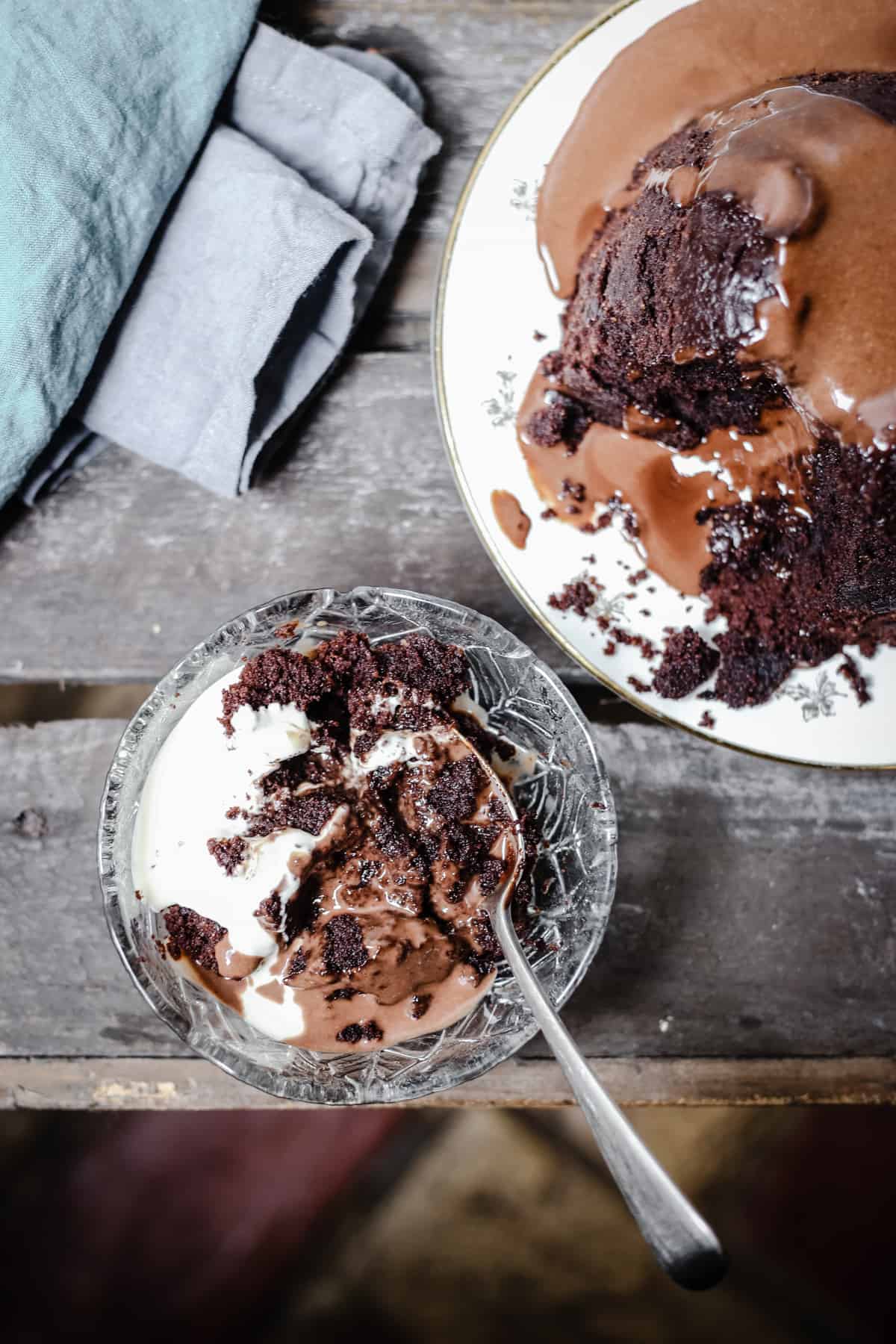 First we would line up for our main course and I’m sorry to say I can’t remember a single main meal that we had. Probably shepherds pie but after that I’m a bit stumped. I think it’s very clear where my allegiances lay even in those early days as the puddings I have no problems recalling.

After our main meal had been cleared away each table would be called up again to line up for our pudding. Always hot and always served with custard so thick you could stand a spoon up in it.

There was spotted dick or vicarage pudding (which was pretty much the same as spotted dick) or treacle sponge with vanilla custard, jam roly poly with strawberry custard or the pudding every child revered, chocolate pudding with chocolate custard.

Chocolate custard isn’t something which you come across much these days. Pubs might serve a crumble with a bit of weak vanilla sauce if you’re lucky, the likes of which would be laughed out the door at Chilton Foliat Primary School.

Proper nursery custard that has body and a life of its own outside its sponge or crumble accompaniment is little seen. Let alone the rarity of a strawberry or chocolate custard. And forget Bird’s custard (which I don’t have an issue with as such) but homemade custard with double cream, eggs and sugar is a five minute job and in another world of its own. Add a bit of cocoa powder to proceedings and chocolate custard will suddenly become the most important food discovery to emerge from your kitchen since toast. 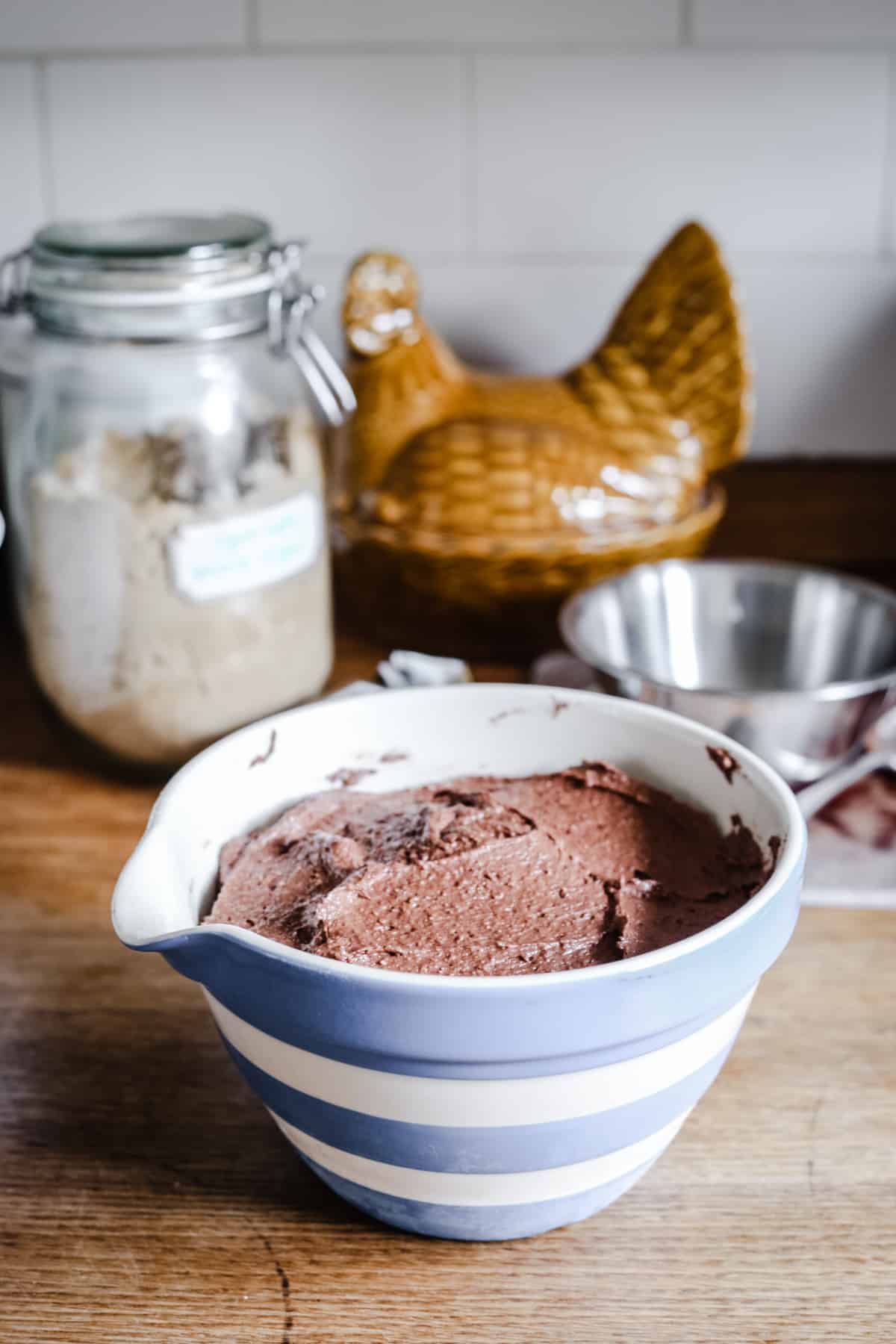 This Chocolate Sponge Pudding is old school as well. Steamed in a pudding basin, the old fashioned way.

Steamed puddings are few and far between these days but this Chocolate Pudding will encourage you to rediscover them. It is so quick to pull together, perhaps a little bit faffy to sort out the lid of the pudding basin and make sure you have a big stockpot large enough to fit it in, but really only five more minutes of prep time.

It does steam for 1½ hours so a little longer than a sponge you might bang in the oven but really there is no bother and technically no baking involved so a great pudding if your oven is on the blink. 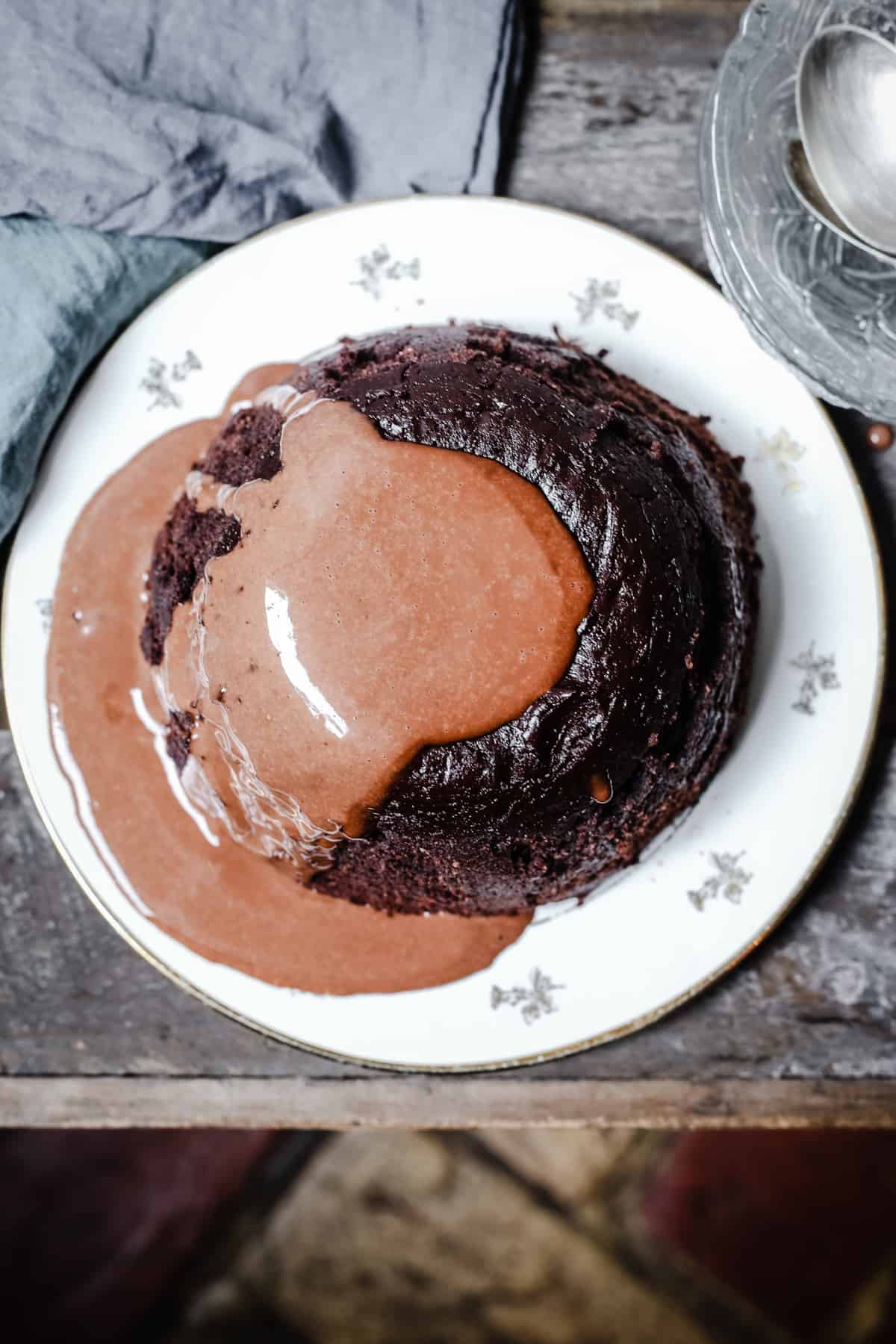 That’s not even to mention the sheer indulgence of the Chocolate Pudding itself. Sticky on the top from the rich ganache you cleverly nestled into the bottom of the basin which then soaked alluringly into the sponge during steaming.

The pudding is moist and almost gooey in the centre and is the part you really want to get your spoon stuck into as you are serving it up. It’s an ideal pudding in my chocaholic frame of mind and utterly lives up to all of my cravings. Steamed Chocolate Pudding with Chocolate Custard is exactly what weekend puds are all about. 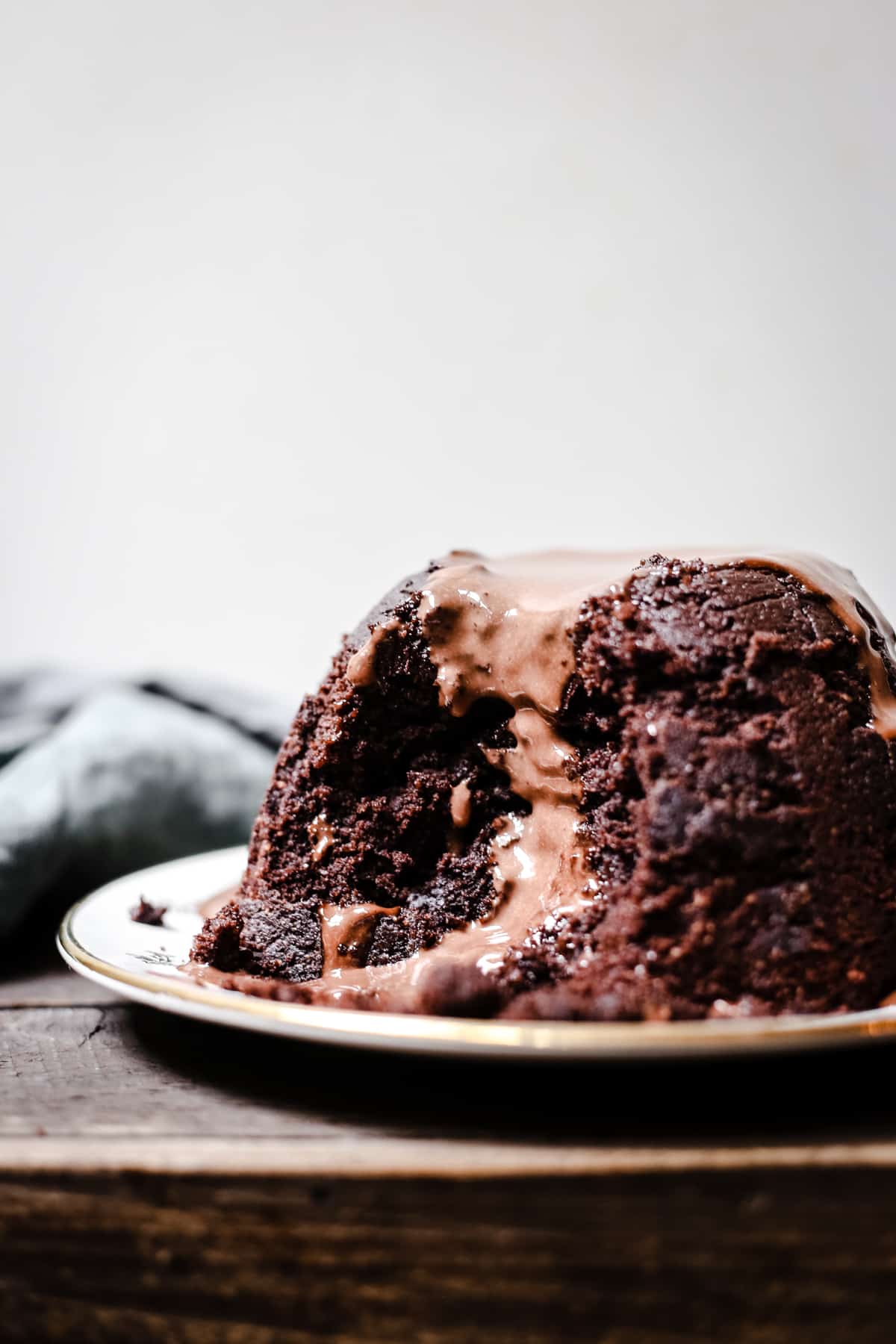 I urge you to give this Steamed Chocolate Pudding a try. If you do then please leave a comment below and give the recipe a rating which helps others find the recipe on Google. If you then go on to use this recipe as a launch pad for your own culinary creation then I’d also love it if you’d share it and tag me on Instagram. It is so lovely for me to see your versions and variations of my recipes. 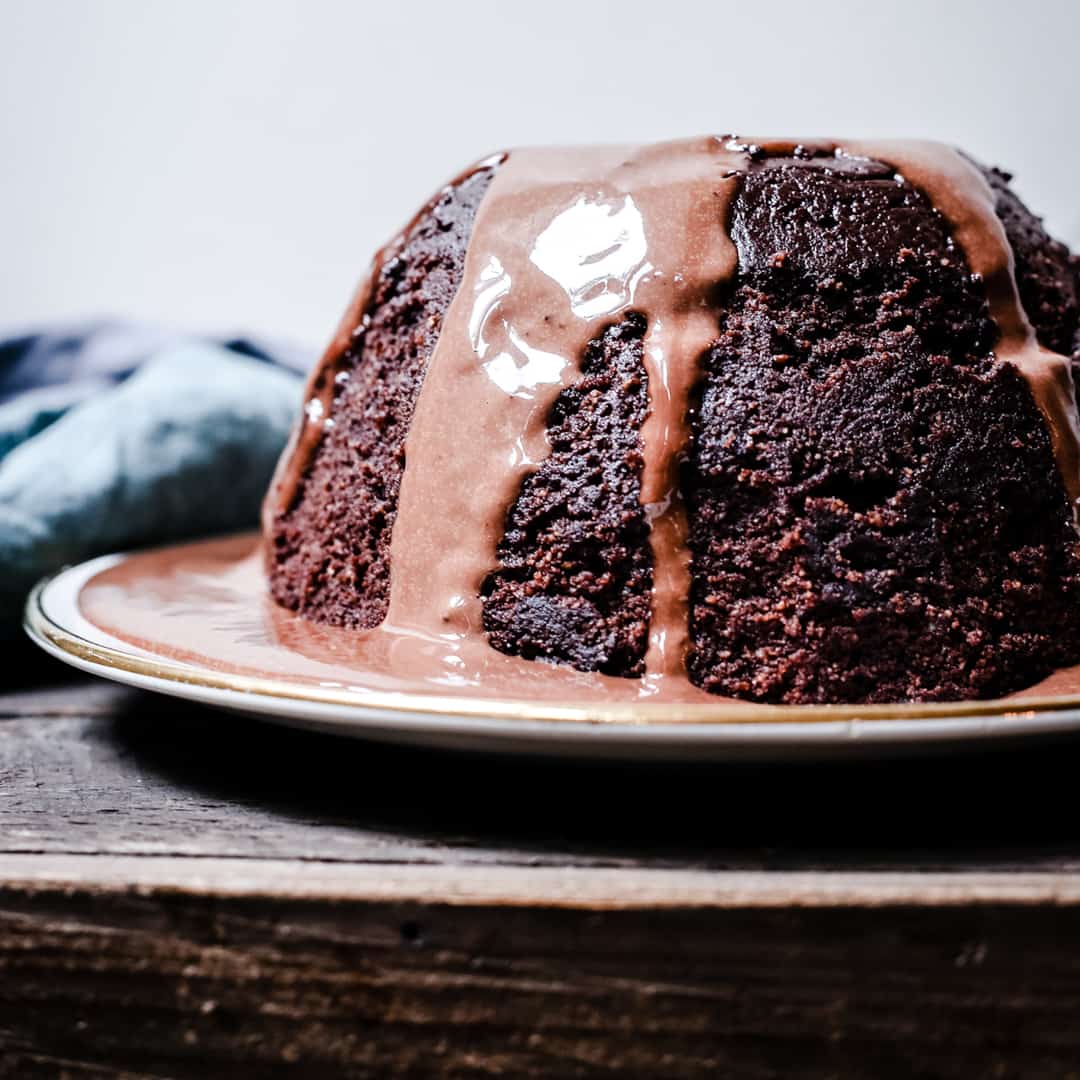