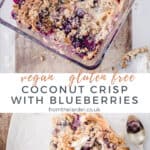 This Coconut Crisp is a coconut extravaganza. Fruity blueberries are baked in a creamy coconut custard blanketed with an irresistible oaty coconut crumble topping. A stress-free vegan and gluten-free dessert which is utterly delicious and surprisingly easy to throw together in a hurry.

Coconut Crisp is the perfect pud if you are craving something warm sweet and comforting but you can’t be bothered with all the faff. It takes no more than 10 minutes from all your ingredients being in the larder or the fridge to them being assembled and tucked into the oven for a 30 minute bake. You don’t even have to get your food mixer out – it can be made in two mixing bowls and the baking dish.

It’s exactly the sort of pudding that brings your family together at the end of a weekend, squished up on the sofa, slippers on, a pot of tea on the go and a good period drama on the telly.

The crisp and the crumble are very similar desserts and both are usually some sort of fruity base layer baked underneath a crumbly biscuit topping.

A crumble is made of flour, butter and sugar rubbed together to form a sweet crumbly dough to scatter over the fruit.

The crisp is similar but usually has something a little extra like oats or nuts to up the crunch factor.

Often the terms can be interchangeable but in this instance we are baking a Coconut Crisp which has a topping made from coconut flour, coconut oil and sugar plus porridge oats and coconut flakes which crisp up beautifully in the oven.

What ingredients do we need?

How to make Coconut Crisp with Blueberries

The steps are simple:

Tip! Watch the timings on this one. The coconut flakes can burn easily so set the timer and take out of the oven as soon as it’s golden.

How to serve it.

This is an absolutely delicious dessert served warm with a dairy-free coconut ice cream (if you want to keep it vegan).

How to store it.

Once cooled then cover the Coconut Crisp, still in its baking dish, with aluminium foil and store in the fridge where it will keep well for up to 3 days.

Can you freeze it?

Yes, allow the crisp to cool completely then wrap it up well, still in its baking dish, in a double layer of aluminium foil. The crisp can be kept frozen for up to 2 months. To defrost remove from the freezer and allow to defrost thoroughly before re-heating.

Remove the aluminium foil then place in an oven pre-heated to 180°C / 160°C fan assisted oven / gas mark 4. Bake for 15 -20 minutes until the filling is piping hot and bubbling.

I urge you to give this Coconut Crisp a try. If you do then please leave a comment below and give the recipe a rating which helps others find the recipe on Google. If you then go on to use this recipe as a launch pad for your own culinary creation then I’d also love it if you’d share it and tag me on Instagram. It is so lovely for me to see your versions and variations of my recipes. 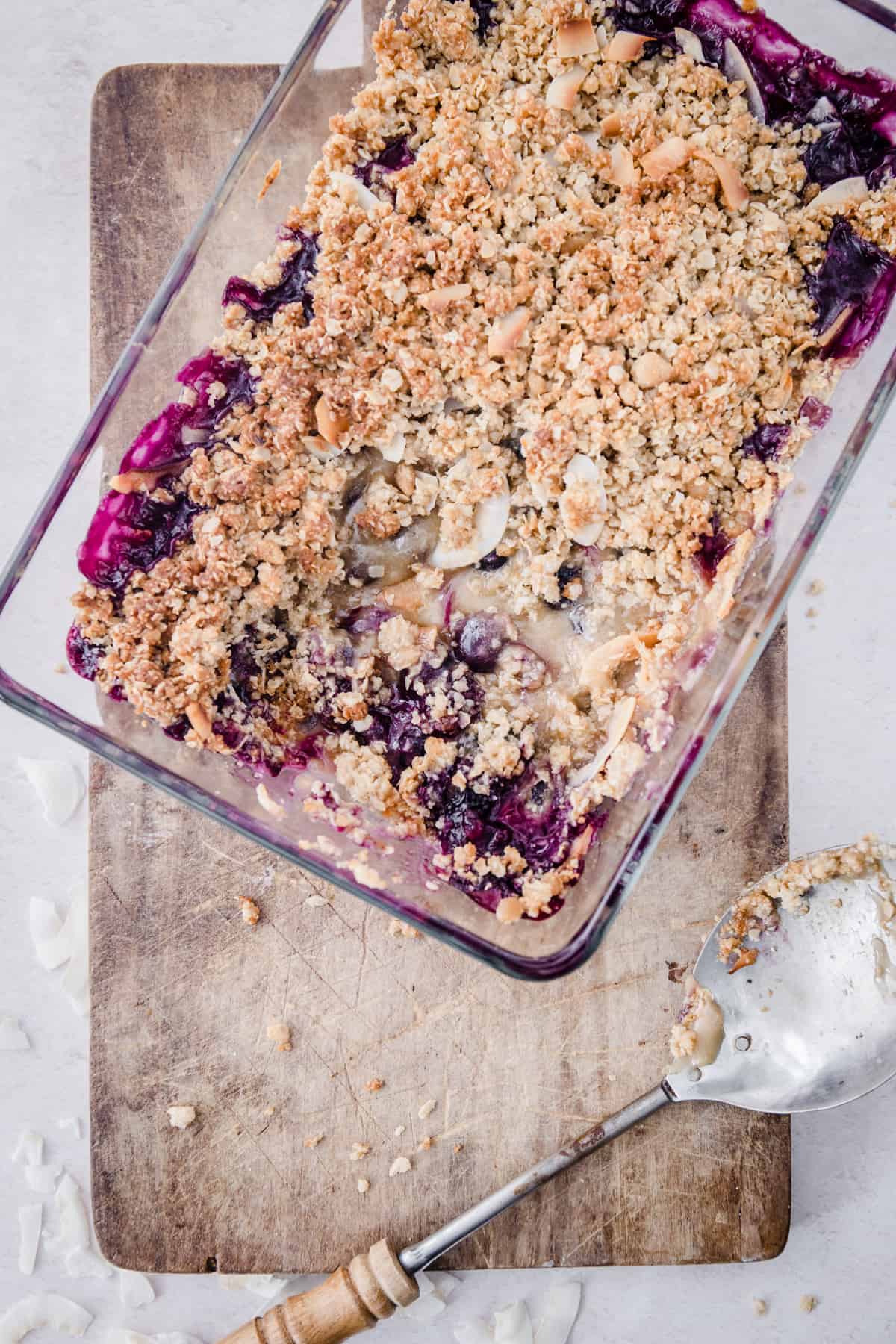 This recipe was tested in a 27 x 17cm glass baking dish.

Porridge oats. You can use rolled oats and pulse them slightly in the food processor which will make the rolled oats easier to clump. Blueberries. Can be substituted for raspberries or cranberries

Watch the baking time on this Coconut Crisp as the coconut flakes in the crumble mixture can burn if left in the oven. Set the timer and remove from the oven as soon as it is golden and bubbling from beneath.

You can make this dessert up to 3 days ahead and store in the fridge. Wrap it up well in aluminium still in the baking dish so that it can be re-heated easily. You don't want to affect the crisp crumbly by transferring it to a different container. When you are ready to re-heat then unwrap from the aluminium foil and heat for 15-20 minutes in an oven pre-heated to 180°C / 160°C fan assisted oven / gas mark 4.

Allow the crisp to cool completely then double wrap the baking dish in aluminium foil and store in the freezer for up to 2 months. Allow to de-frost completely before re-heating as above.