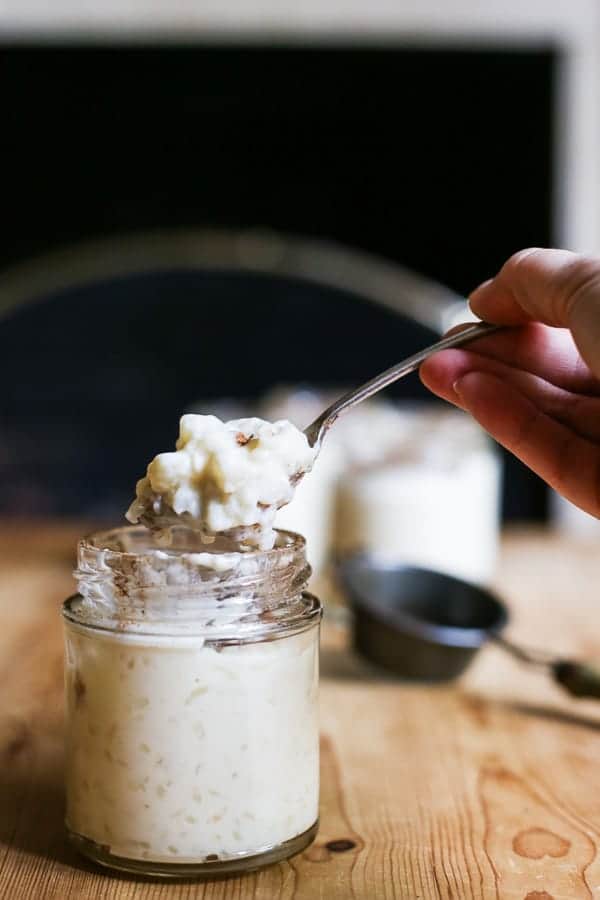 When not pregnant I really try to avoid eating too much dairy as it doesn’t always sit well with me but with this pregnancy, the same as when I was expecting Cole, all bets are off as far as dairy is concerned. Since I’m a great believer in listening to my body (except when it tells me I need a third Dairy Milk Chocolate Mousse Snowman – I’m pretty sure that’s just greed) I’m giving it what it wants, so cheese, crème fraiche, sour cream and ice cream are all on the menu. However I’m still having almond milk in my tea and on my granola because obviously I’ve got to draw the line somewhere and where better than the healthy use of dairy. 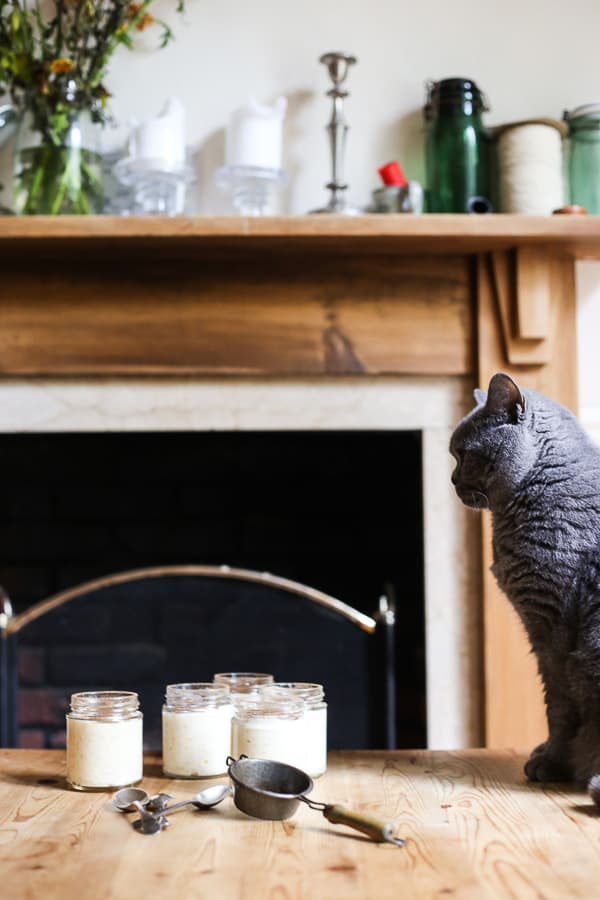 I could barely stand let alone cook for a good portion of my first trimester as I felt so abominable but there was a couple of occasions when my craving for rice pudding managed to quell the morning sickness for long enough that I could stand at the stove top for half an hour just so I could get my fix. In fact for a few days it was the only thing I could stomach at all so I would make a good saucepan full, decant the rice pudding into little jars and store in the fridge for when the next sweet carb craving hit. This delicious, creamy rice pudding is made with mainly whole milk but also a dash of cream for a little bit of richness. Flavoured delicately with vanilla and a sprinkle of spice on top, it’s currently my favourite way to eat rice pudding. 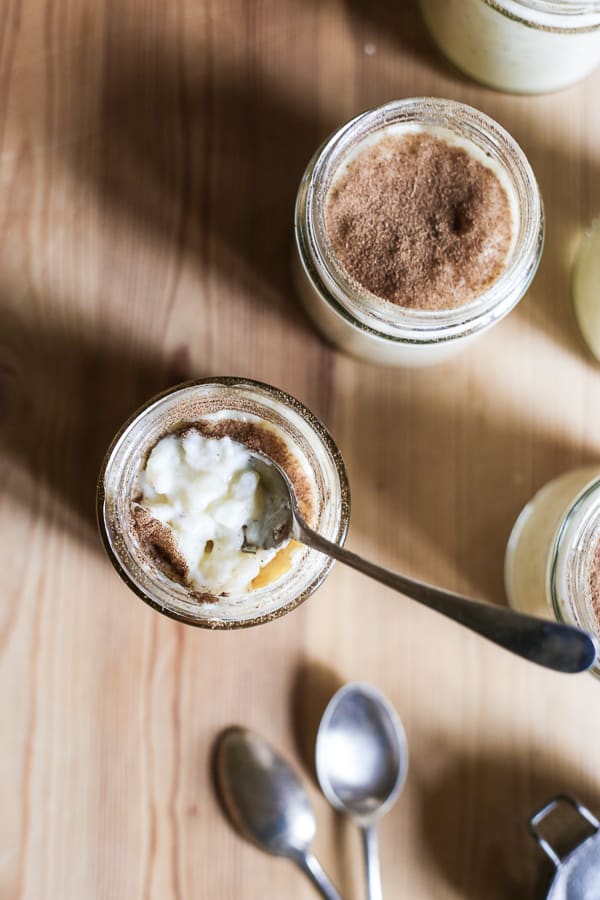 I have vivid memories of rice pudding as my mother went on a bit of a rice pudding jag sometime during my early teens and I’m pretty sure we had rice pudding every single week for about a year. Mum used to throw all the ingredients into a baking dish and cook it for a few hours in the oven which is a divine way to do things. However, I took my inspiration for this recipe from Turkish Rice Pudding (sütlaç) which is made completely on the stove top and takes just 45 minutes from start to finish rather than the prolonged 2-3 hours that oven-baked rice pudding can take. It requires a little more stirring and attention than oven-baked but the result is so creamy and doesn’t develop that skin over the top that I would rather do without to be honest.

I lived just off Green Lanes in North London for many years which is synonymous with the dozens of Turkish Restaurants that line all the way up the Harringay Ladder. The area has changed a little since we moved out six years ago but when we lived there Turkish was the only cuisine to be had in the area, save one lonely Italian restaurant, and sütlaç was pretty much the only dessert that was on offer. Now don’t get me wrong I’d happily order it and eat the whole lot with nary a complaint but it did strike me a little odd that a dessert based on rice following a main meal that would also predominantly consist of rice was maybe laying it on a little thick. Still, the beautifully rich and creamy texture, sprinkled with lashings of fragrant cinnamon won me over every time. 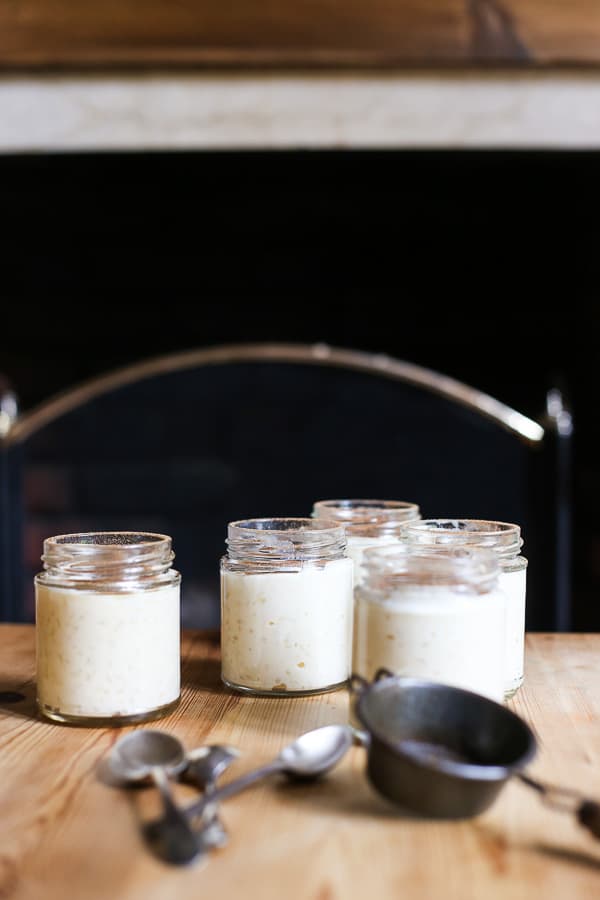 This rice pudding is designed to be eaten chilled rather than straight from the saucepan, but really you could do either. Actually this is a pretty good dessert to make this time of year as if you do serve it chilled it can be made a couple of days ahead of time and the individual puddings are ready to serve straightaway in their pretty jars. When there’s so much going on it’s nice to think that something can be taken care of ahead of time. 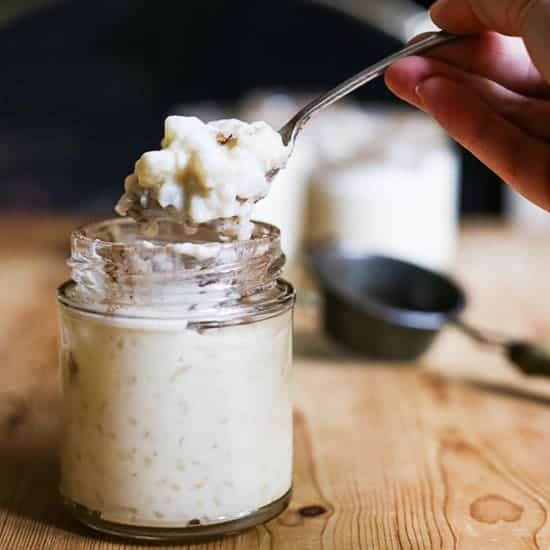 Calories: 211kcalCarbohydrates: 42gProtein: 1gFat: 3gSaturated Fat: 2gCholesterol: 13mgSodium: 101mgPotassium: 20mgSugar: 25gVitamin A: 145IUCalcium: 10mgIron: 0.7mg
Have you tried this recipe?Head to the comment section and let me know what you think!