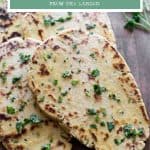 This Gluten-Free Naan Bread is incredibly easy to make. You can whip the recipe up in the time it takes for your curry to cook. You can make it on the hob in a few minutes and you don’t need any yeast or xanthan gum. Simple and quick. You can be dipping your bread into your curry in no time. 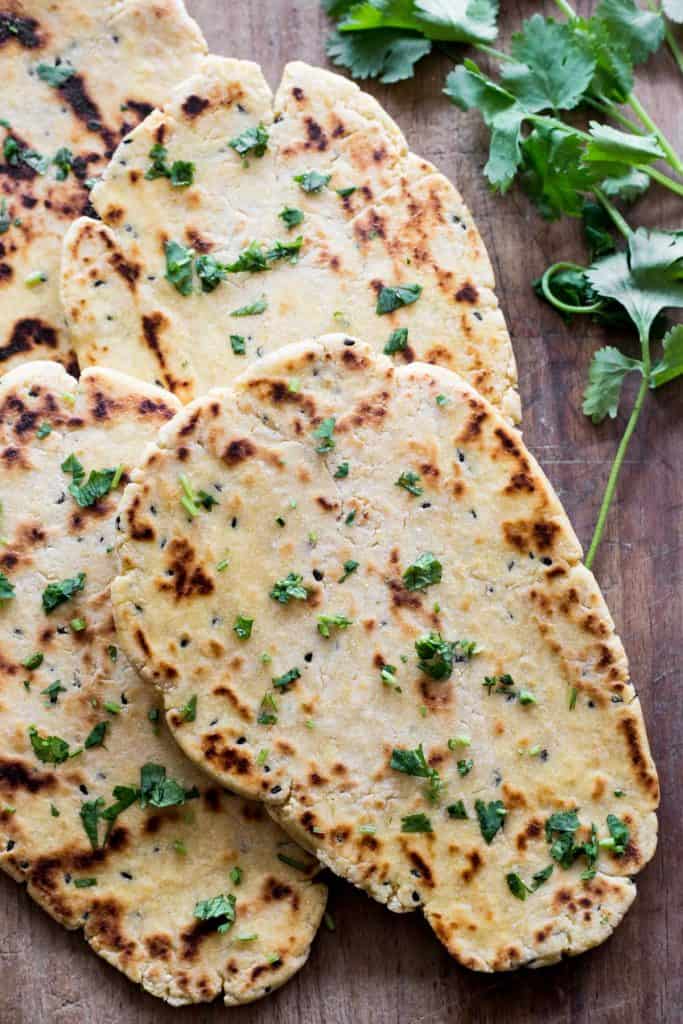 Curry nights are not the same without some naan bread to help scoop up the curry sauce and raita. It’s almost like an alternative form of cutlery.

I have been really missing naan bread recently with my homemade curries. I used to make it myself before I was gluten-free and it was always so easy to whip up. So I have no idea why it took me so long to create a gluten-free version. And you know what, this version is just as easy and just as delicious.

What is Naan Bread?

Naan, meaning bread in Persian, is a flatbread typically made on the walls of a clay tandoor oven. The exterior is crisp and the inside fluffy. The bread is usually used for scooping other food or can be stuffed with a filling.

Now, tandoor ovens are not that usual in domestic kitchens but we can easily make Naan Bread in a searingly hot pan on the hob instead.

Naan Bread is typically leavened but in this recipe we forgo yeast and the boring rising time and use baking powder instead. It does the job excellently.

This isn’t the only yeast-free bread recipe on this website. Have you tried this delicious Gluten-Free Irish Soda Bread? 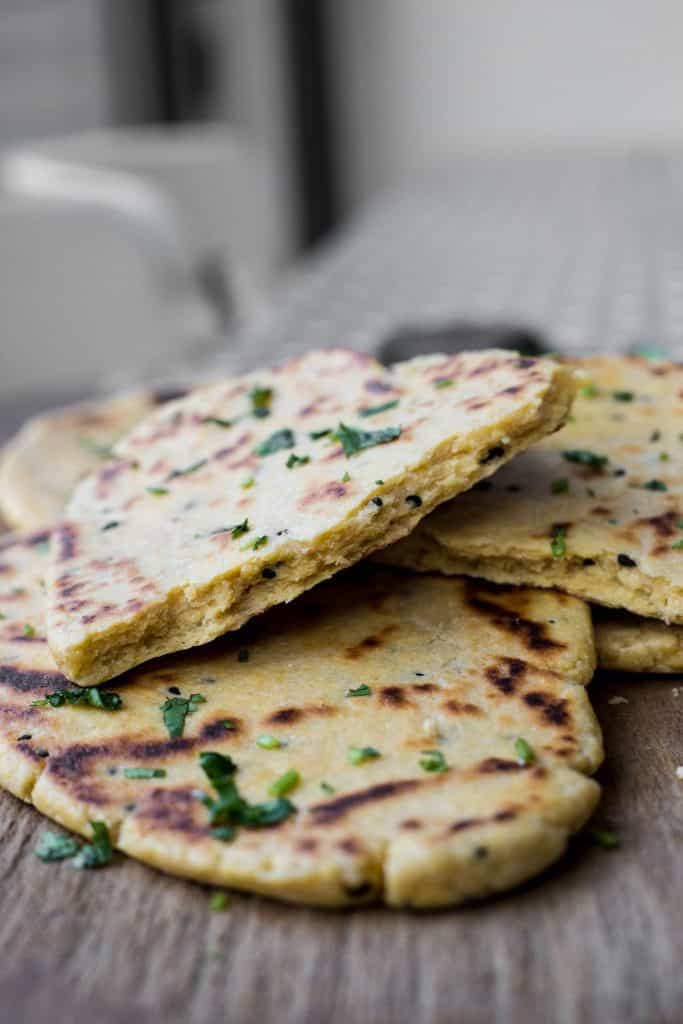 Why is this Naan Bread recipe so brilliant?

How do you make Gluten-Free Naan Bread?

This dough is susceptible to cracking and tearing but I have great success rolling the dough out between two sheets of cling film. This means no extra flour and a nice smooth surface.

Do you need a curry recipe to go with this Naan Bread? Why not try this Turkey Peanut and Kale Curry. 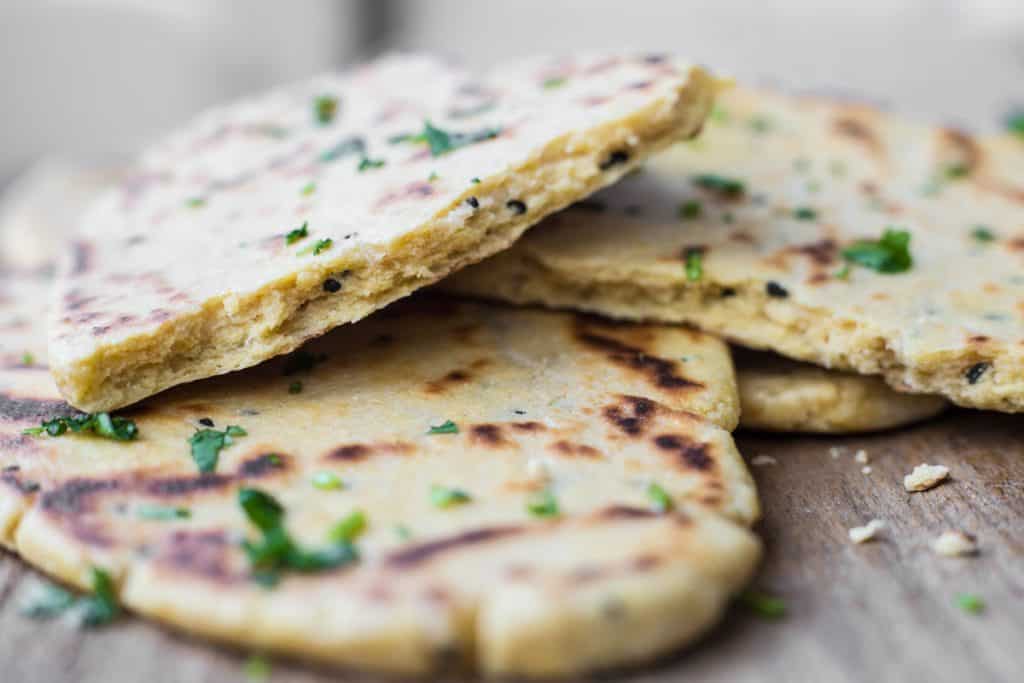 Can you make Naan Bread dairy-free?

Yes, you just need to swap the butter for melted coconut oil and the natural yoghurt for coconut yoghurt.

How long does Naan Bread keep for?

This naan bread is best eaten straightaway. Just as well it’s so quick and easy to make.

Can the Naan Bread dough be made in advance?

Yes it can. You can make it up to two days in advance and store it in the fridge in cling film. I recommend bringing it out of the fridge an hour or so before you want to start preparing your naan bread to soften a little.

How can you switch things up?

If you make Gluten-Free Naan Bread then please leave a comment below and/or give the recipe a rating. If you then go on to use this recipe as a launch pad for your own culinary creation then I’d also love it if you’d share it and tag me on Instagram. It is so lovely for me to see your versions and variations of my recipes. 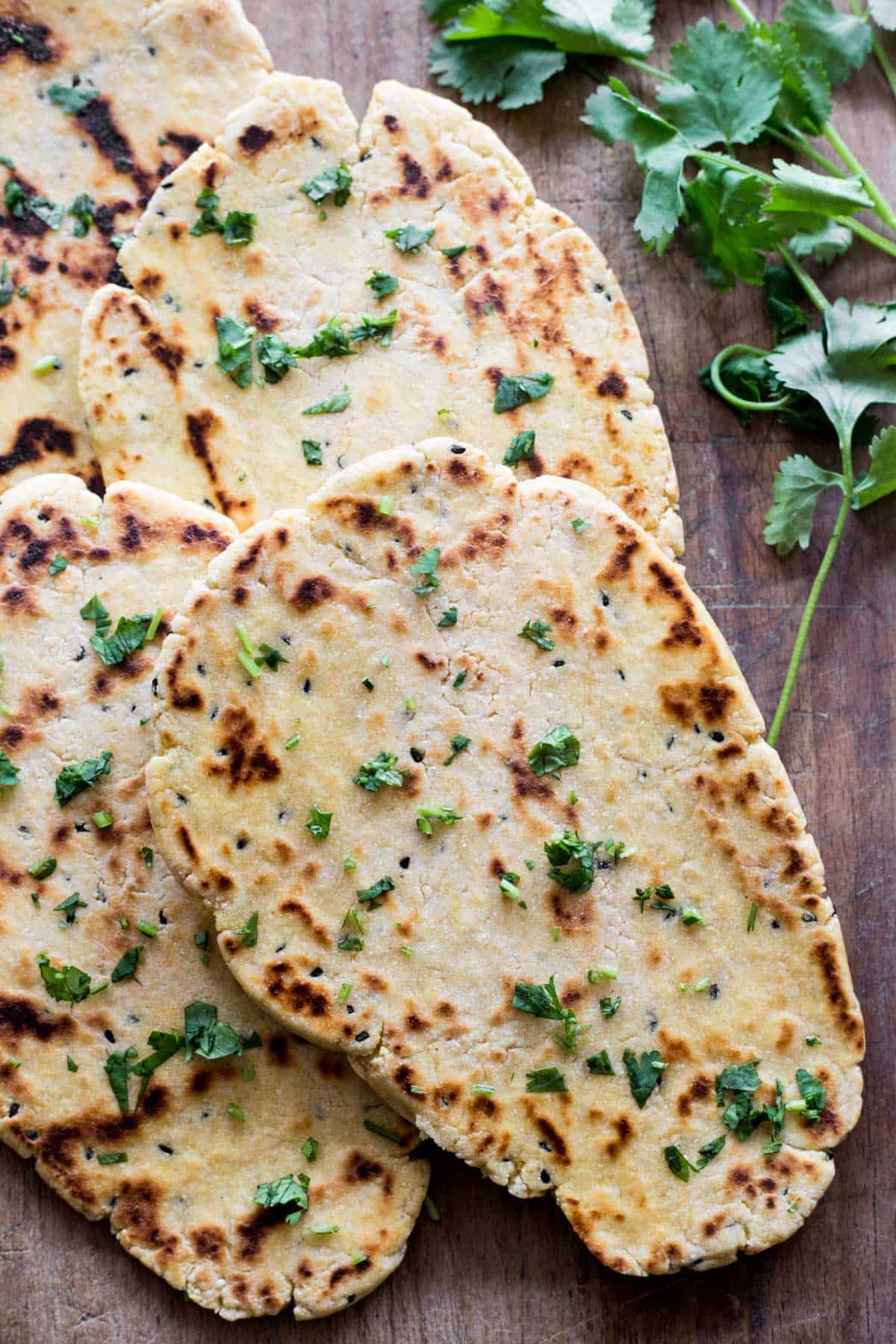 Georgina Hartley
This Gluten-Free Naan Bread is incredibly easy to make. You can whip the recipe up in the time it takes for your curry to cook. You can make it on the hob in a few minutes and you don’t need any yeast or xanthan gum. Simple and quick. You can be dipping your bread into your curry in no time.
5 from 3 votes
Print Recipe Pin Recipe
Prep Time 8 mins
Cook Time 8 mins
Resting time 30 mins
Course Bread
Cuisine Indian
Servings 4 people
Calories 316 kcal