This Chocolate Chip Clementine Christmas Pudding with Cointreau Sauce is a delightful alternative take on the Christmas Pudding. Still rich with fruit and spices but imbued with velvety pools of chocolate and the sharp sweetness of clementines. 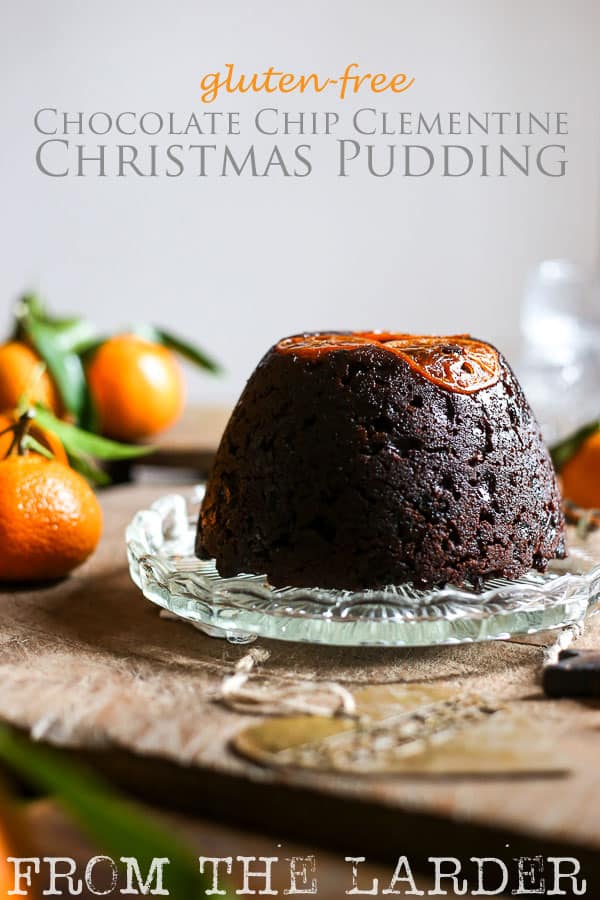 I hate to break it to you but this weekend is the last Sunday before advent. There is no denying it any more, Christmas will soon be upon us and in no time we’ll be scrabbling around on Christmas Eve desperately trying to wrap up all the stocking presents, brine the turkey and wrestle the children into bed.

Amid the present and meal prep chaos there is definitely one job you don’t want to be doing on Christmas Eve and that’s making a Christmas Pudding. Let’s face it if you haven’t made it by then it’s more than likely you’ll be swinging by Tesco before it closes hoping they haven’t sold out of all the gluten-free ones. There’s nothing like a homemade Christmas Pudding though. That’s why it’s best to get ahead and tradition decrees that the fifth sunday before Christmas is the ideal day for such a job. It’s Stir-Up Sunday people!

Stir-Up Sunday harkens way back to Victorian times and gets its name from the opening of the book of common prayer which is read on the last Sunday before advent ‘Stir up, we beseech thee, O Lord, the wills of thy faithful people’ It seems that the Victorians took the bible at its word and it soon became tradition to stir up your Christmas Pudding on that day too. And with good reason, it’s such a good idea to get it out of the way early doors. After its initial steam a Christmas Pudding can sit quite happily for weeks or even months and even tastes better the longer you leave it.

Christmas Pudding evokes such childhood nostalgia for me that a generous portion at Christmas is more than a delicious dessert, it’s like a transportation device to my past. I loved the Christmas Pudding our Auntie Lil always used to make us but I also have a fondness for the one we were served every year at school.

Christmas time at our school was magical. The whole school would sit at tables in the main dining hall, an ancient and creaking cavernous room, all wooden beams and pillars with a balcony high above surrounding the room where the older years would sit. Just after the Christmas Pudding was served the lights would be turned off so we were in pitch darkness. The room would fall silent, all 700 children, and a beautiful choral echo would be heard faintly from outside. As the singing grew stronger, our choral society would hover into the room, shrouded in capes, holding candles and singing haunting Latin carols. The memory of Christmas Pudding drowning in brandy sauce still in our mouths. Perhaps if we were lucky a faint metallic taste might be on our tongues as well which meant that we had been one of the hallowed few to have found a penny wrapped in foil in our serving. To be treasured indeed.

My recipe for Traditional Christmas Pudding is usually the one I turn to every year and although I will never tire of it I fancied a change. So this Christmas I will be making this Chocolate Chip Clementine Christmas Pudding with Cointreau Sauce and I could not be more excited to share it with my family, it’s utterly delicious.

What I love about this recipe that even though this pudding is beautifully chocolately it is still most definitely Christmas Pudding and the flavours marry together so well. The teff flour, which is the gluten-free flour I chose for this recipe works so beautifully in support of the chocolate. There is so much texture in this Chocolate Chip Clementine Christmas Pudding, the molton puddles of chocolate chips give the pudding a softness, the dried fruit give a lovely chew with a final nobbly crunch from the nuts. And despite all the rich flavours going on, this Christmas Pudding is lighter than you think, it’s not stodgy at all. As long as you don’t let it sit after it has finished steaming and serve straightaway.

The Cointreau Sauce is a nod to the brandy sauce we were always served at school and actually I think this may be my favourite accompaniment to the pudding. It’s adapted from a Delia Smith recipe for her Brandy Sauce and it is light and simple. The gentle flavour of the Cointreau Sauce lets the pudding speak for itself whilst providing the much needed sauce and a spicy after kick of Cointreau.

Also a little bit of advice on this recipe, I know we’re all about Stir-Up Sunday but since this recipe takes a couple of days to make you will probably want to start prepping on the Saturday. Stir-Up Saturday if you will. This means you can do the final bit of work and the big steam on the Sunday rather than the job bleeding into your working week.

If you do fancy ringing in the changes with your Christmas pudding this year then I urge you to give this Chocolate Chip Clementine Christmas Pudding with Cointreau Sauce a go, and if you do then please leave a comment below and give the recipe a rating which helps others find the recipe on Google. If you then go on to use this recipe as a launch pad for your own baking creation then I’d also love it if you’d share it and tag me on Instagram. It is so lovely for me to see your versions and variations of my recipes. 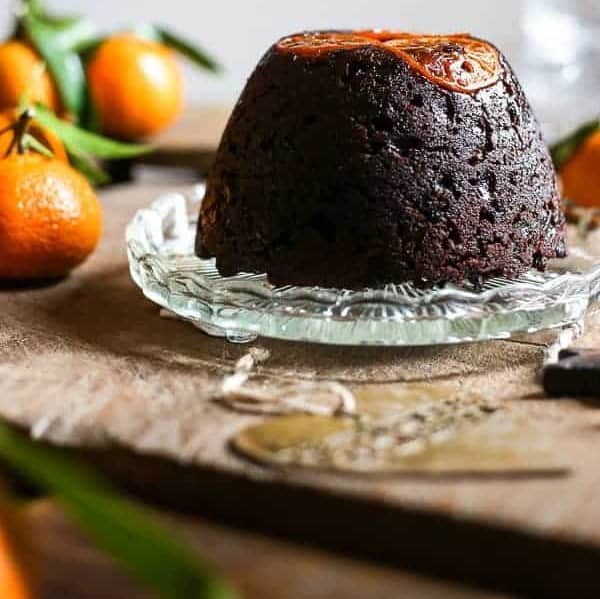 *It’s just not possible to buy gluten-free pre-packaged suet so do speak to your local butcher about obtaining fresh suet. It will come in a solid block which you will need to grate with a bit of gluten-free flour so that it can evenly disperse throughout the mincemeat. Cointreau Sauce adapted from Delia Smith's Brandy Sauce