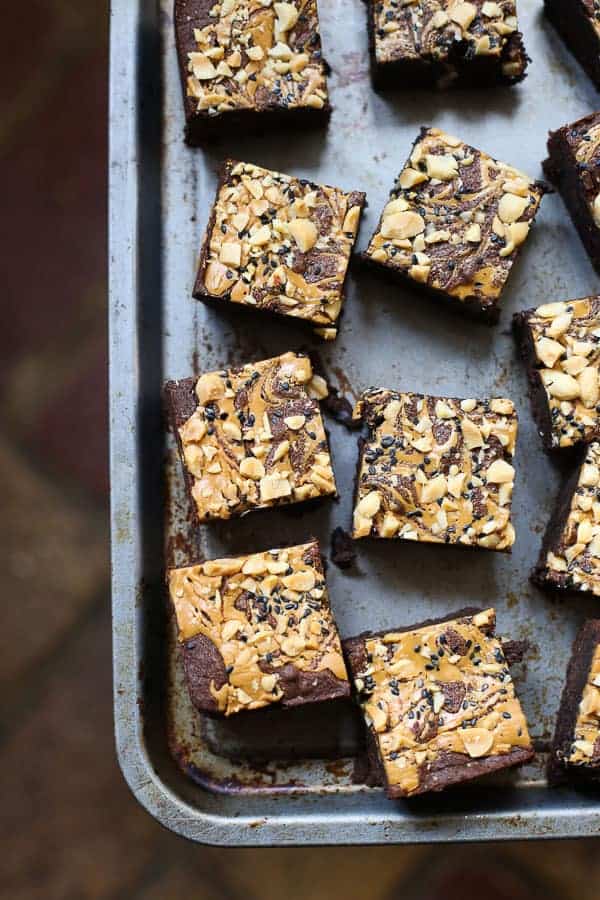 It’s important to have a particularly good brownie in your back pocket and this is mine.

Well it was anyway. For years, happily attending cake stalls with me, being brought to hen weekends, or baked up in a big old batch when only the dark intense comfort of chocolate can satisfy.

The thing was, that as it stood, my brownie recipe was created with plain old wheat flour. As I transitioned to a 100% gluten-free way to life last year I just couldn’t abandon my tried and true Black Sesame Peanut Butter Brownies on the wayside. So I set forth on a quest to make them gluten-free without losing any of their taste or texture. 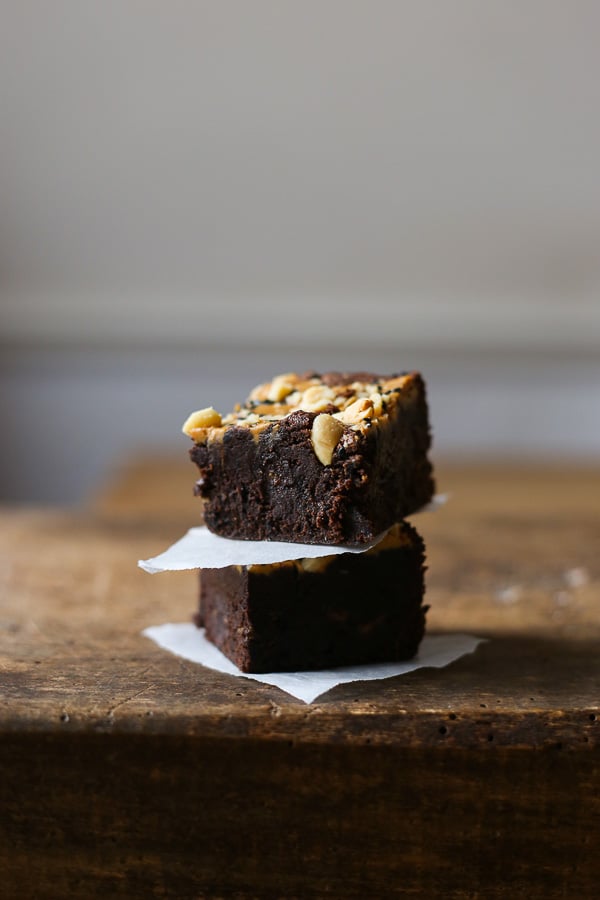 If you’re interested in reading about how you might change a brownie recipe made with wheat flour to a gluten-free version which is just as wickedly delicious then do read on.

I can’t lie this brownie is not the same beast as it was back in its old wheat incarnation. No, when I made the switch I opted to inject more flavour into this already wonderful brownie and the flours used intensified its fudgy interior. Instead this gluten-free Black Sesame Peanut Butter Brownie is better than it ever was before.

How do you make a brownie recipe gluten-free?

In a lot of brownie recipes flour is almost an afterthought which is why they are so easy to make gluten-free. If a brownie recipe uses less than 100g of plain flour then try just swapping in a generic gluten-free flour blend. You will barely notice the difference. Though if you rely on these blends for recipes which require a lot more flour then you will become aware of the slightly gritty, more crumbly qualities that bad gluten-free baking is famous for.

You might even decide if there is only a scant amount of flour involved that you would like to substitute ground almonds which would be an excellent decision. You will certainly notice a difference in taste and texture if you go this route but it will be a delicious one, more squidgy and flavourful and of course packed with protein - practically a healthy snack. 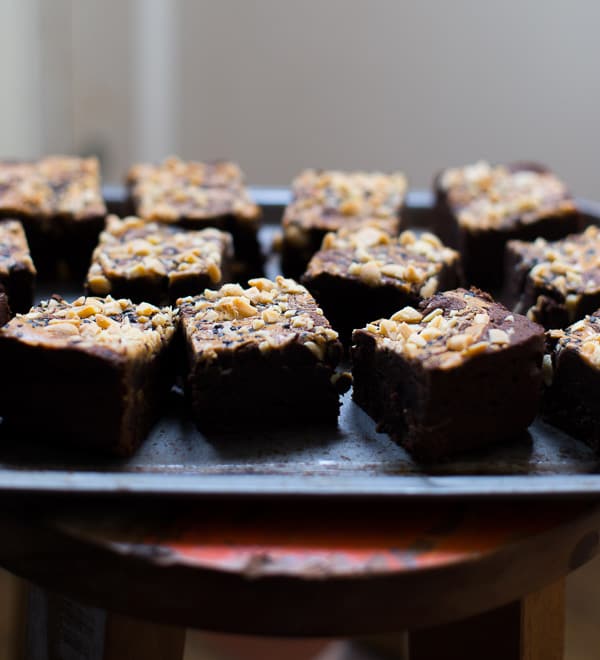 These changes wouldn’t work with the Black Sesame Peanut Butter Brownie though as not only would almonds compete with the layers of flavour this brownie is already boasting but it also required 175g of plain flour which is a fair amount for a brownie and too much for a straight swap of a gluten-free flour blend.

When I initially created this recipe I wanted the brownie to be bigger, bolder and better than other brownies I had tried so with the 300g of melted dark chocolate and 4 eggs in the mix that large amount of flour was needed to hold the brownie together.

Gluten-free baking is a challenge but also really good fun as the playing field is wide in terms of which flours you choose to use for which cake. It gives the baker an extra element of control and is so satisfying when you get the exact right blend of flours right. Here I had a lot of flour to play with and I didn’t want to lose the integrity of the original brownie so I had to choose wisely. 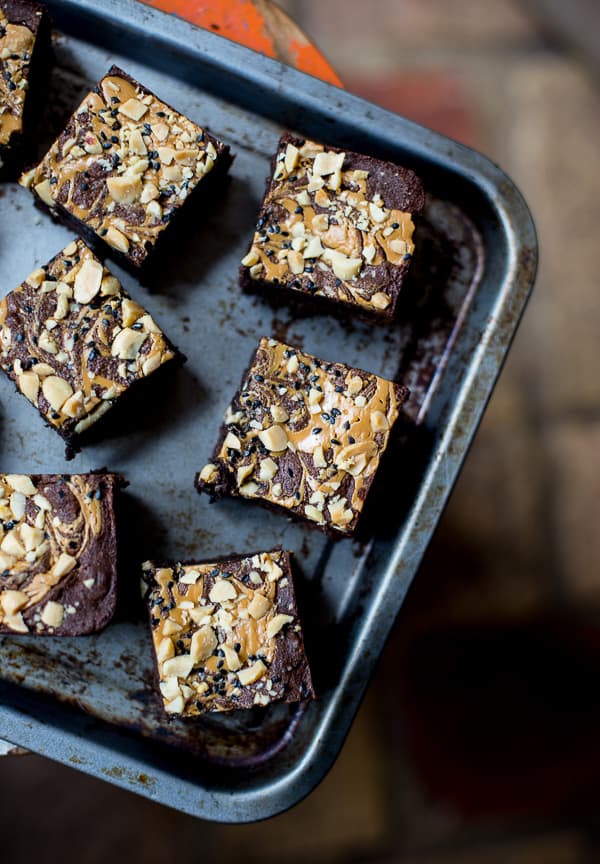 I plumped for teff flour as the lead flour for flavour. Teff is an ancient Ethiopian flour with a slightly malty cocoa aroma and so it is not an unusual choice for a brownie. The teff flour adds an extra element to the brownie batter, providing a subtle landscape for the black sesame and peanut butter flavours.

However, I didn’t just want to swap in 175g of teff flour as the taste would be a little overwhelming plus the brownie would probably cave in on itself due to the fine nature of teff flour. Somehow I needed to replicate the job the gluten makes to hold it all together. 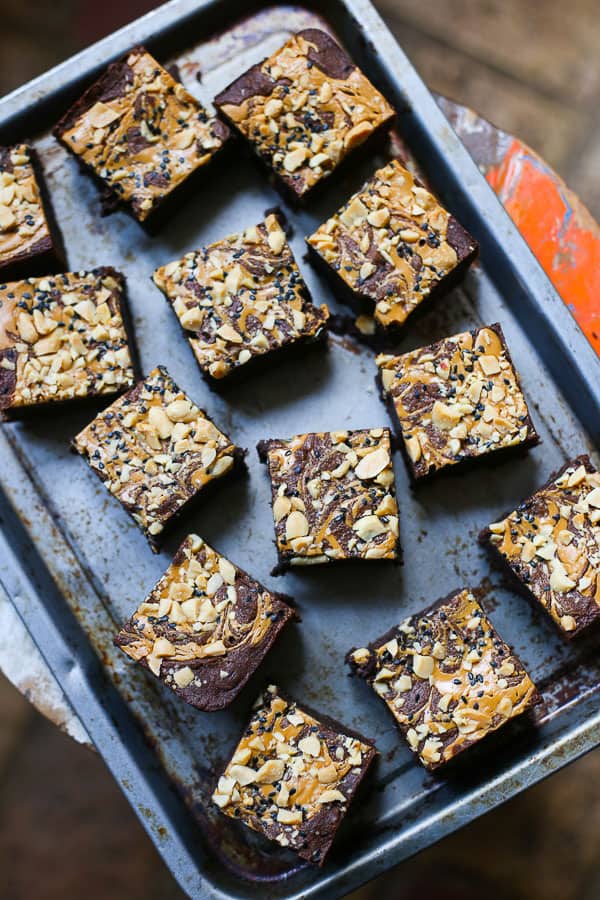 This is where the tapioca flour comes in. Before gluten-free baking my tapioca flour would only ever emerge when I made a fruit pie recipe, as it’s often used to thicken up the juices so to avoid soggy bottoms and create a silky fruit sauce.

Now tapioca flour has become a firm friend of mine. A couple of tablespoons here and there help enormously to bind flours, warding away the threat of crumbly dry cakes. 25g is all that is needed in this brownie, you don’t want too much lest the cake gets gummy. 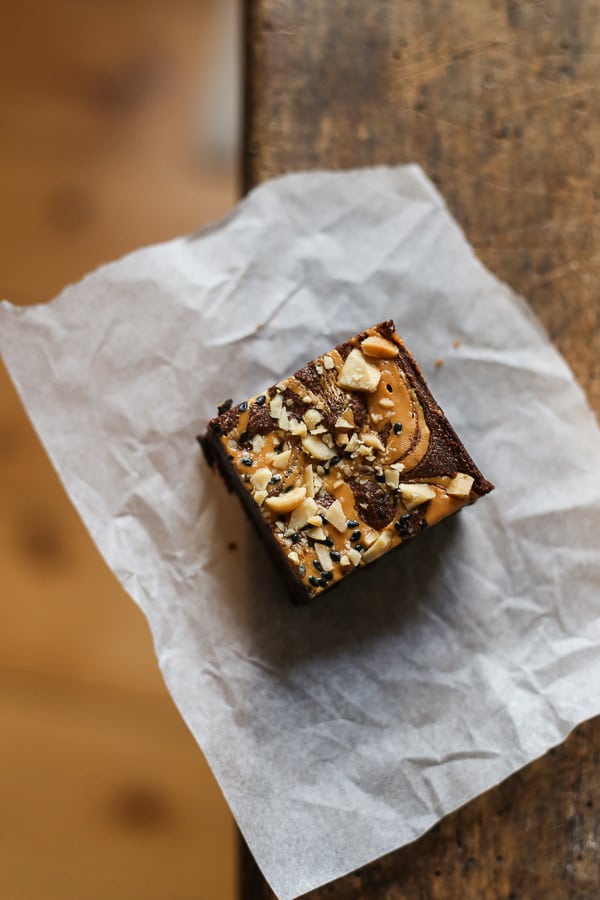 However I still needed a little extra flour as I was lacking in bulk, I chose to split the difference between white rice flour and potato starch, both great neutral flours. I used 25g of each but you can use 50g of either for simplicity if you like.

The new improved Black Sesame Peanut Butter Brownie is finally ready to share with the world. It’s still my absolute favourite brownie recipe, now even more so with the added benefits of teff flour. The effect of intoxicating black sesame seeds, gathered into a paste with honey and married with the peanut butter swirls is glorious. The crunch of salted peanuts and black sesame seeds scattered across the top takes it to another level. 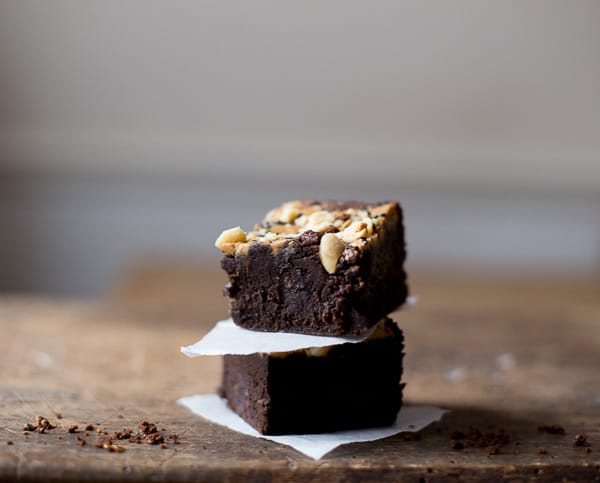 These photographs were taken in collaboration with the brilliant @taraliondaris who I had the pleasure of working with recently. She did a beautiful job styling these brownies and most of the above images were taken by her. 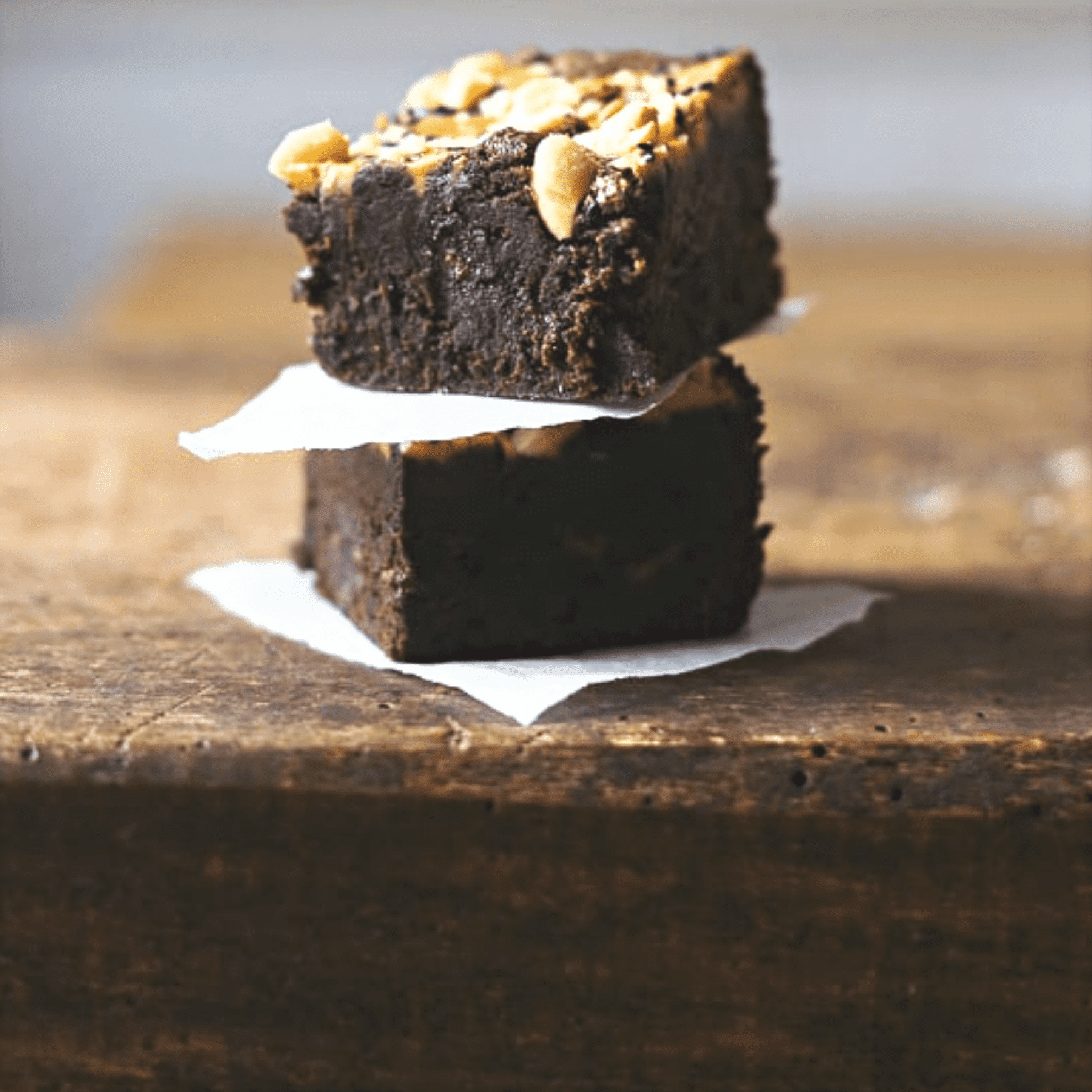 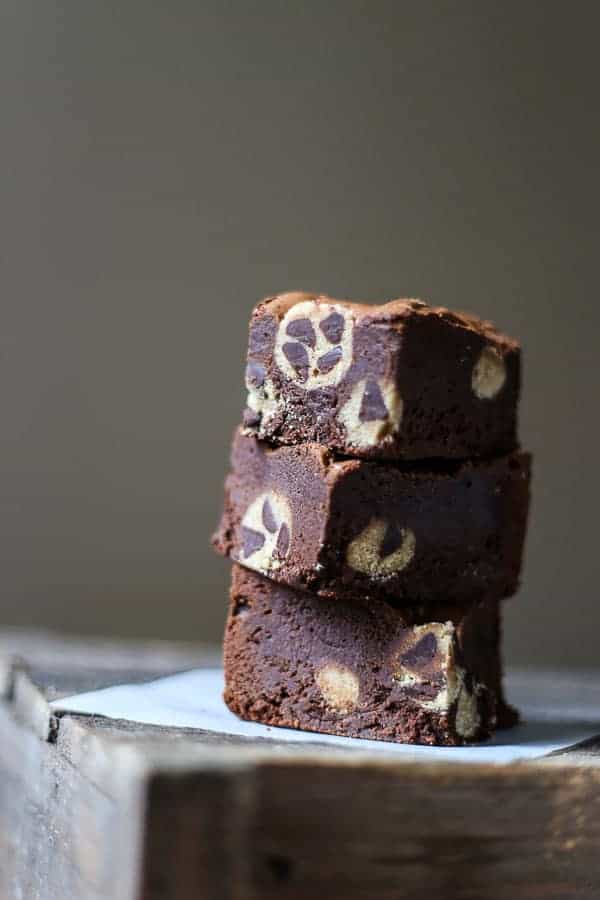