Coffee and Walnut Tres Leches Cake is a spin on the Tres Leches Cake from Central America/Mexico which soaks a delicate sponge in condensed milk, evaporated milk and cream. My version is gluten-free made with buckwheat flour and tastes just like a walnut latte in cake-form. 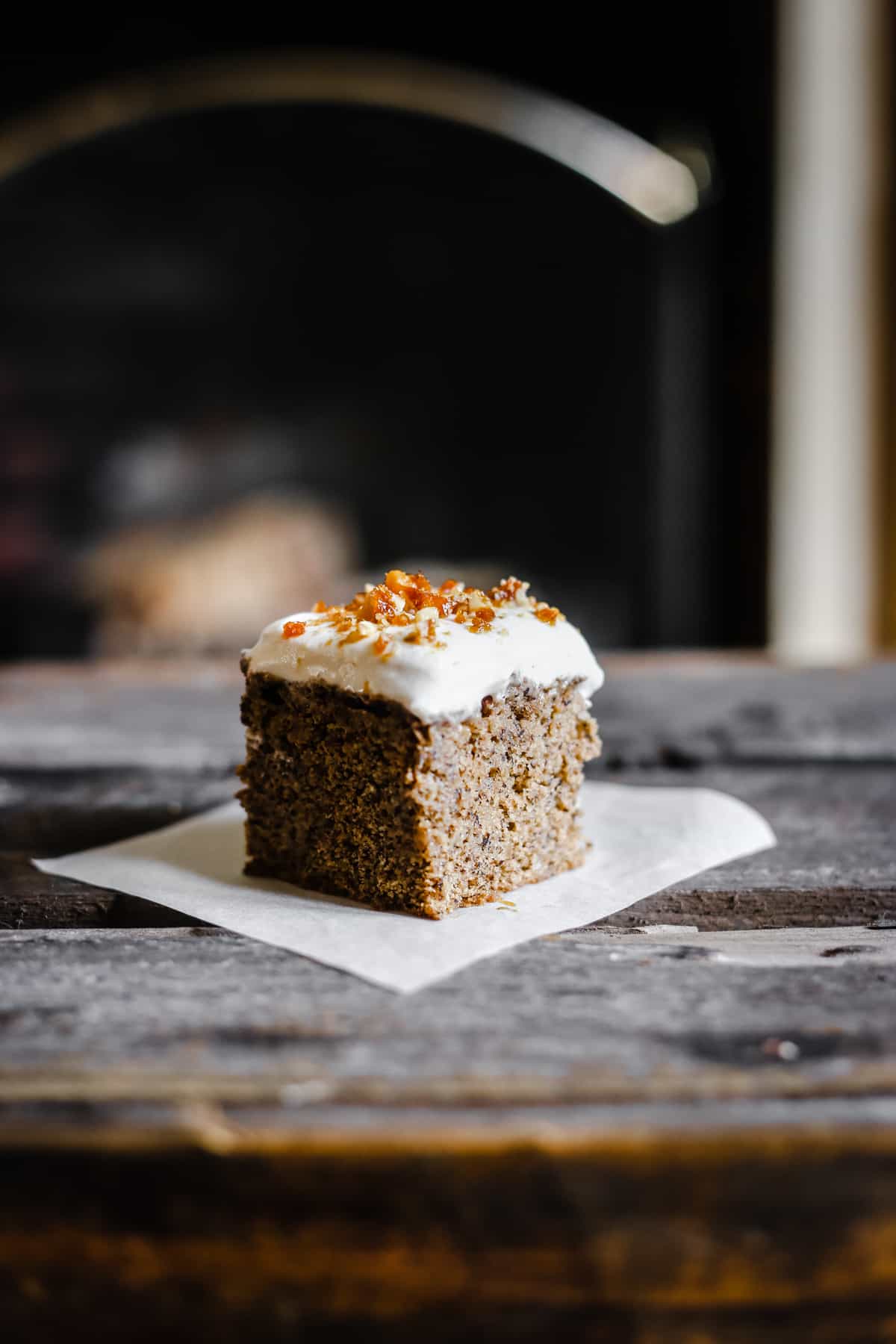 I became 100% gluten-free eighteen months ago and pledged to convert all my recipes to gluten-free or remove them from the website. This is a huge work in progress, namely because I get distracted by new recipes and ingredient obsessions which take priority in my mind. Plus converting an original successful recipe to gluten-free takes a little bit of trial and error as I want the new and improved version to be just that - an improvement. 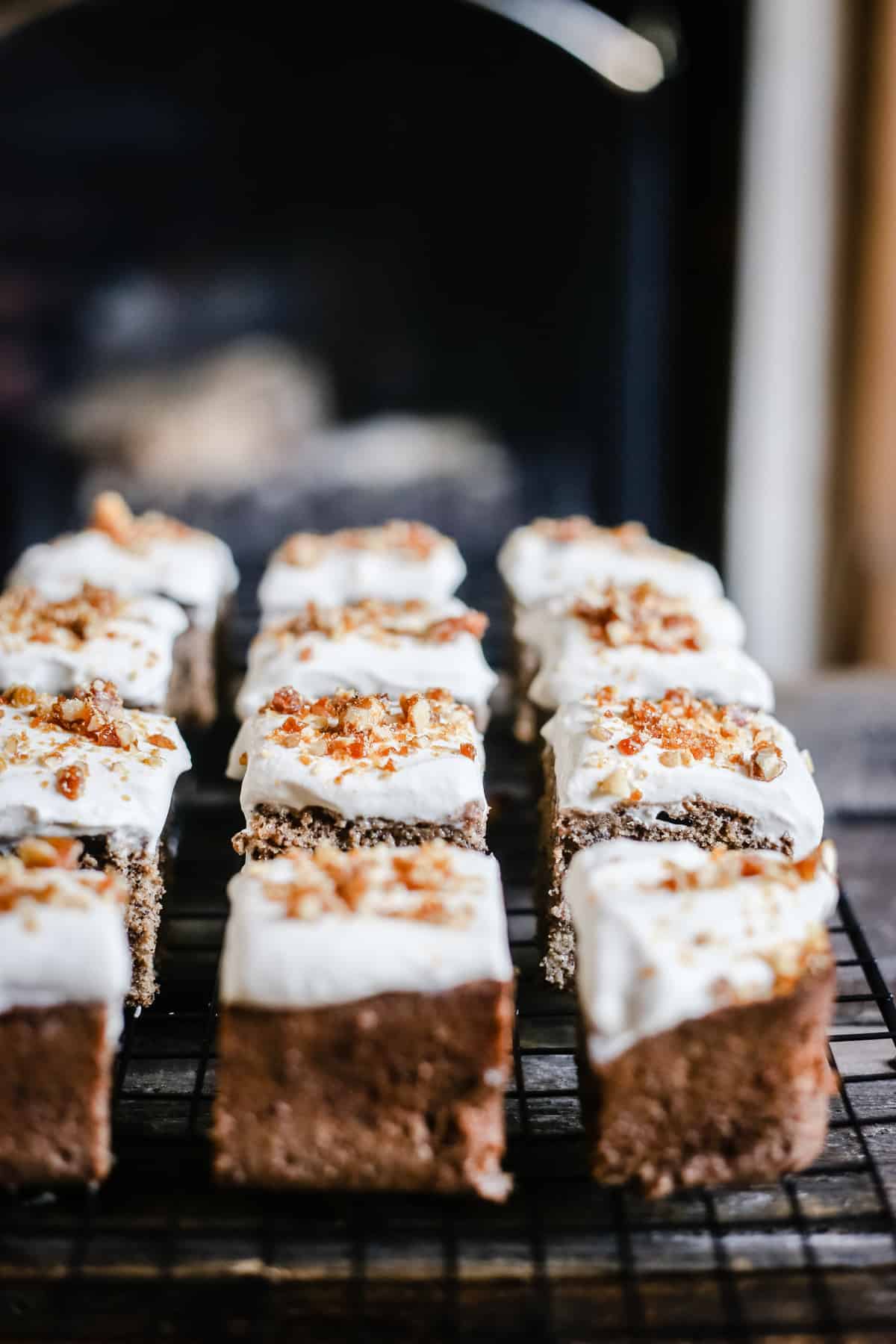 This is where the Coffee and Walnut Tres Leches Cake comes into play. I posted the wheat flour version of this recipe about three years ago, funnily enough, about this time in my last pregnancy. Due to feeling really rubbish in the final part of my third trimester back then I abruptly stopped posting new recipes here. Then Cole came along and I found it really hard to get back into the blog as I adjusted to motherhood so this Coffee and Walnut Tres Leches Cake resided stubbornly at the top of my blog for about four months whilst I found a balance to posting again.

The problem was that the photos for the cake were absolutely terrible, along with a couple of other recipes posted around that time. I felt these were not a great representation of my site so I became ashamed of my blog and when my new friends wanted to see what I did before becoming a mummy I felt I had to apologise for my hard work. So this recipe, along with a couple of others, were removed from the site and languished on my to-do list to be re-posted at some point when I returned whole-heartedly to blogging. Then, as I said above, new recipes and obsessions took over, I became gluten-free so the original cake was no longer relevant and so this Coffee and Walnut Tres Leches Cake lay dormant. 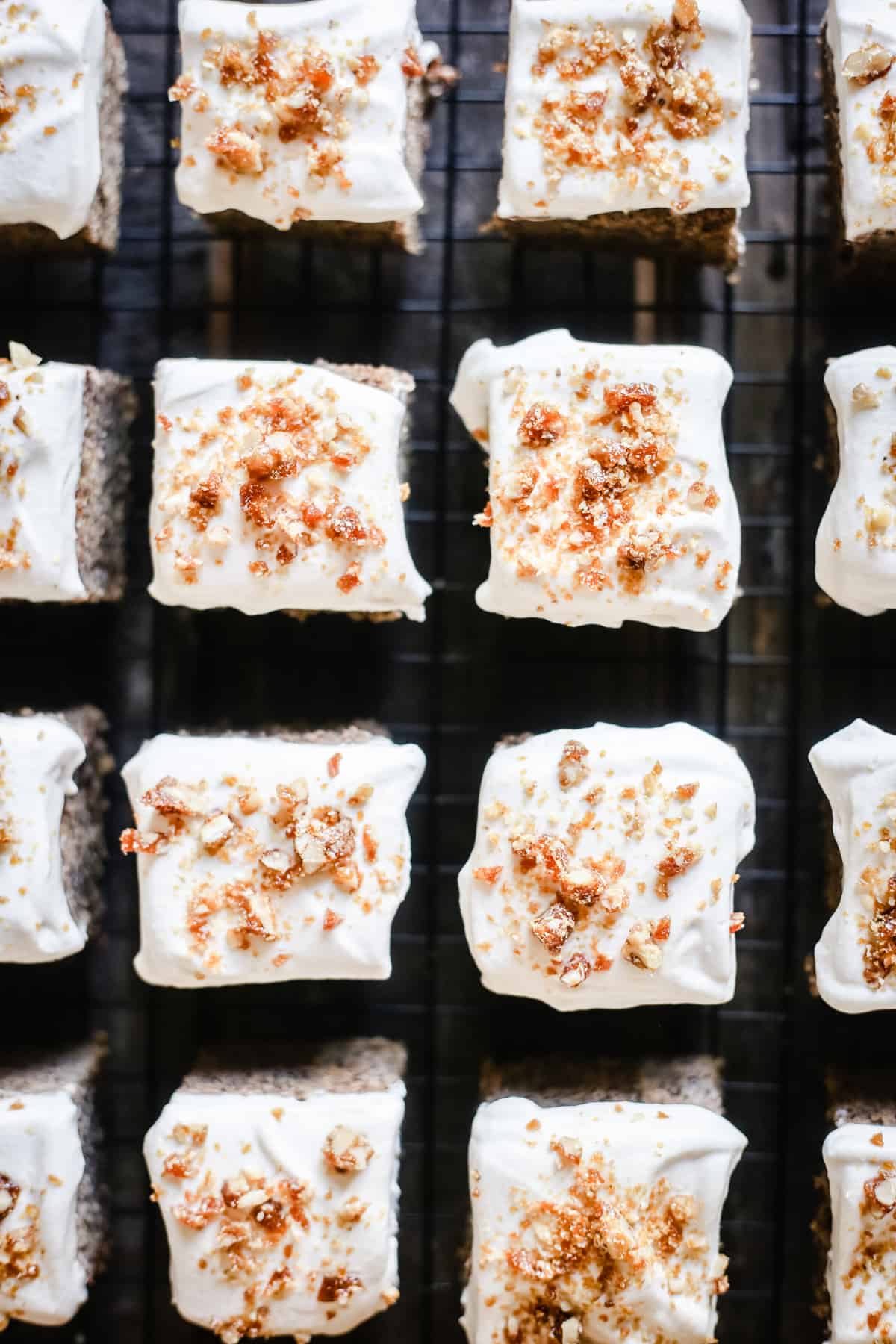 Then last year I offered to bring along a cake to a weekend away with friends. I always offer since this is the ideal opportunity for me to recipe test and get a good range of feedback. Of course my friends are so nice they make all the requisite yummy noises despite how good or bad the cake is. Although I guess it’s cake and it’s homemade which can usually only be a good thing. Anyway, I decided it was time for my Coffee and Walnut Tres Leches Cake to come out of retirement and I tweaked the recipe a little, making it gluten-free, and took it with me. 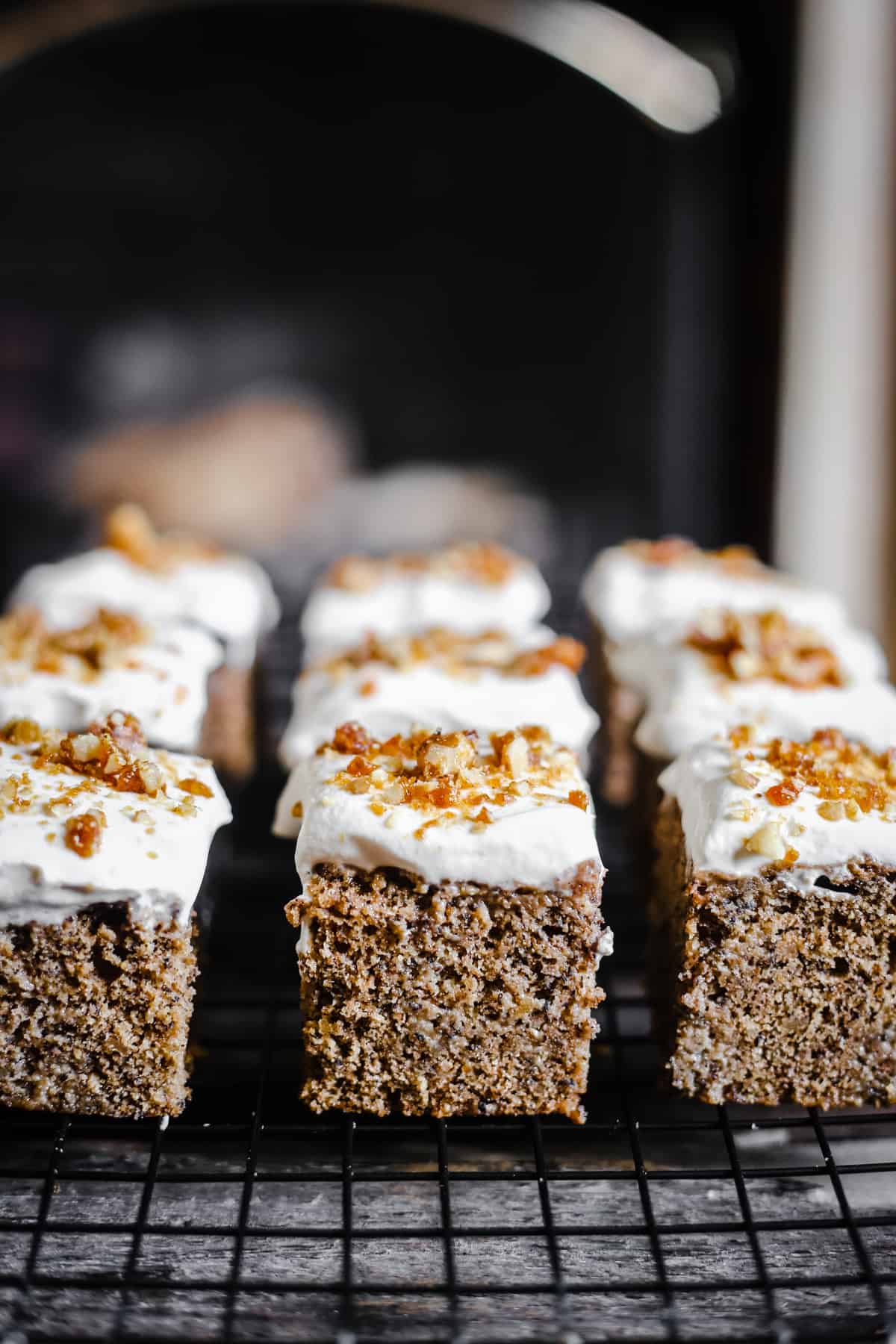 It was a resounding hit and I was thrilled that I could be proud of this cake once more. This Coffee and Walnut Tres Leches Cake had always been delicious but the gluten-free amendments took it to another level. I chose to use buckwheat flour due to its delicious wholegrain nutty flavour which pairs amazingly well with the earthy coffee and walnut notes. Buckwheat flour has a very assertive flavour but it stands up well to this intensely flavoured cake so absolutely shines here. I didn’t want to only use buckwheat flour as too much can be overwhelming so I paired it with white rice flour which doesn’t fight with the buckwheat and instead sits back happily whilst it’s friend reaps all the glory. 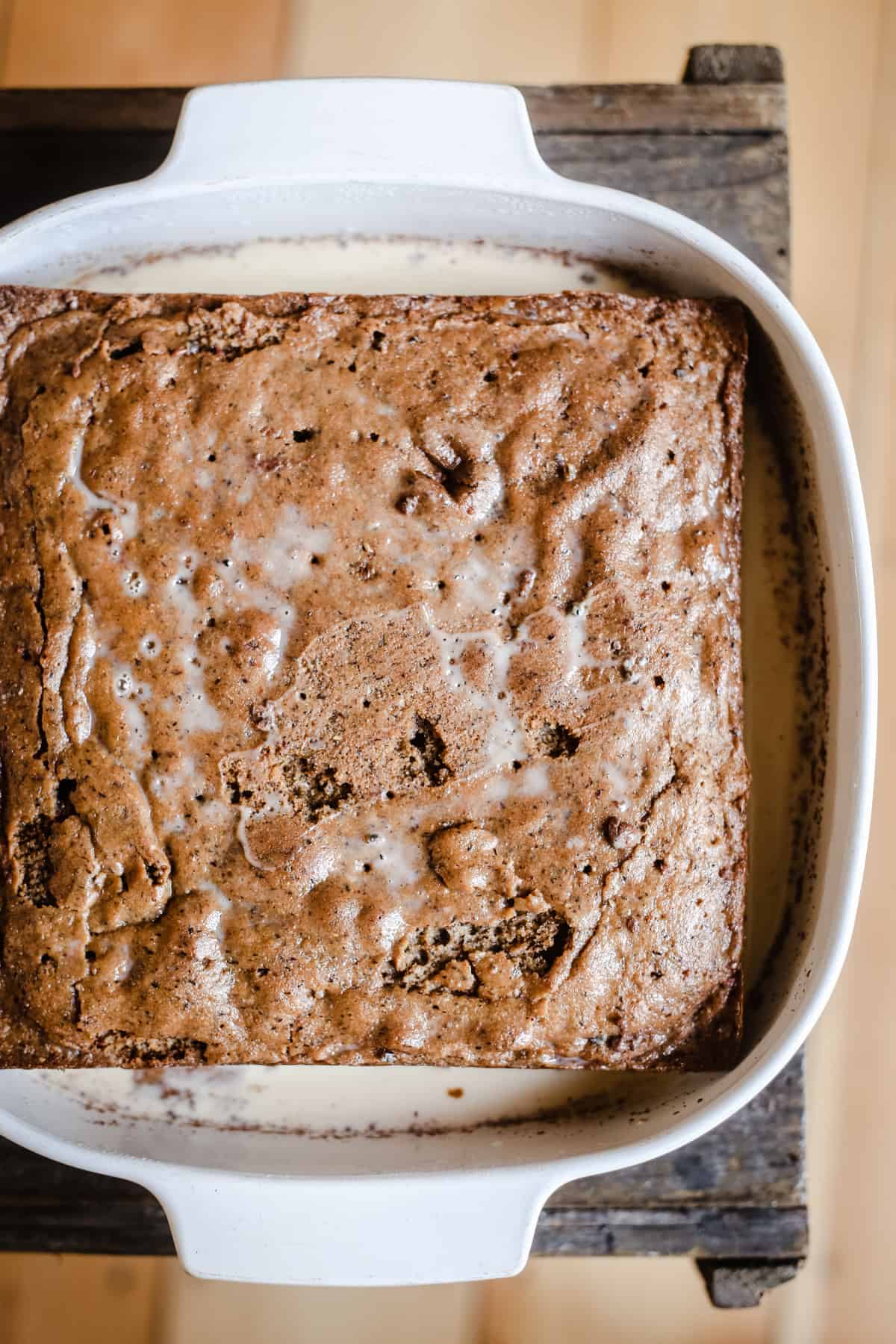 The cake is a very simple coffee and walnut sponge which is made ultra special by giving it the tres leches treatment. The sponge is left to cool slightly after being removed from the oven and then soaked with a mixture of three milks, condensed milk, evaporated milk and cream which have been infused with cinnamon and cardamom. The cake is left overnight to really absorb all the flavour, take on a delightfully moist texture, and is then covered in a whipped coffee cream and sprinkled with caramelised walnuts.

It’s a complete treat of a cake and works well as a dessert due to its ‘soaked’ texture. I have made this cake a couple of ways and I like both, so which direction you take depends on how much you like the moistness of the cake. In my directions below I have instructed to soak the cake with the milks before cutting into squares. This means that although the cake takes on all the flavour of the milks, it isn’t as sodden in the middle, so if someone (I’m looking at my husband) isn’t a fan of the texture then he can have a piece taken from the middle of the cake. However, if you are like me and want the cake as moist as possible (since that’s the idea behind the cake anyway) then I suggest cutting the cake into squares before soaking and then slather on the whipped cream the next day onto the individual squares. Both ways are delicious but you have a choice should you require it. 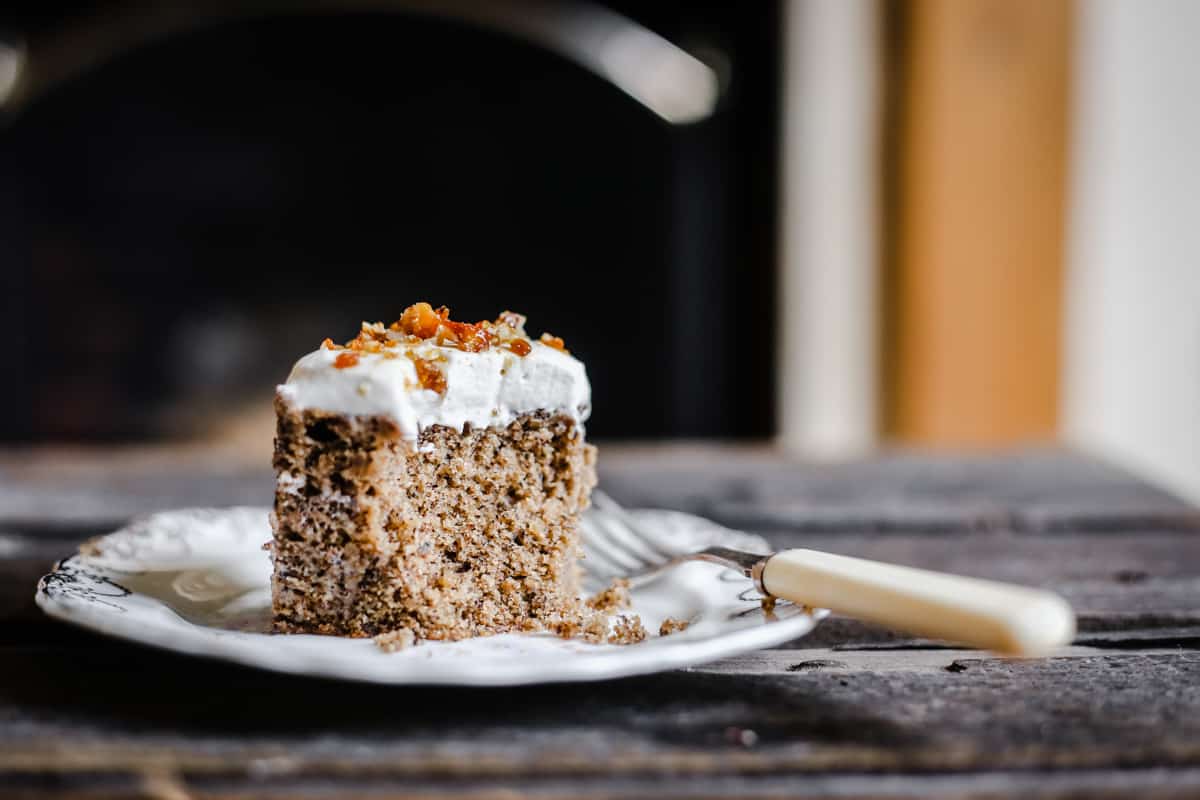 I am so happy to bring Coffee and Walnut Tres Leches Cake back into play on the blog, I feel like it was definitely worth waiting for.

I urge you to give this Coffee and Walnut Tres Leches Cake a try. If you do then please leave a comment below and give the recipe a rating which helps others find the recipe on Google. If you then go on to use this recipe as a launch pad for your own culinary creation then I’d also love it if you’d share it and tag me on Instagram. It is so lovely for me to see your versions and variations of my recipes. 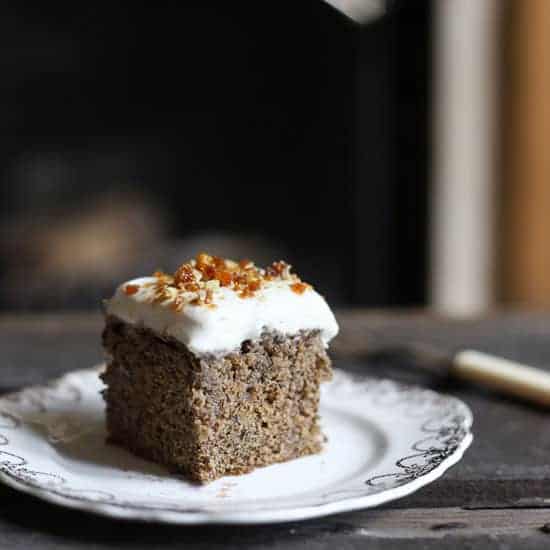