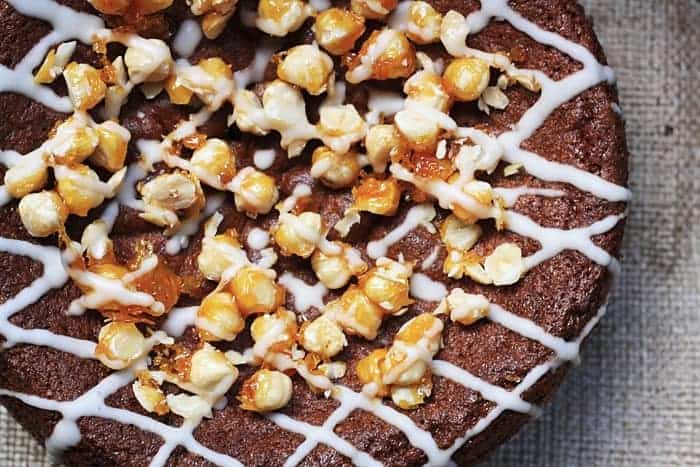 This cake has become one of my favourite cakes of the season and is an absolute winner on my cake stall on a Sunday. It’s one of those all-rounder cakes which is good any time of the day; for breakfast, elevenses or a tea-time treat. It’s also elevated by the fact that it is gluten-free and dairy-free so it is perfectly amenable to the most common of food intolerances. I even had a lady come to my stall on Sunday who couldn’t eat any fat and this one perfectly ticked the box for that dietary requirement too. And did I mention that it’s deliciously moist, packed full of spicy fruity flavour and gilded with a crunchy golden praline too? Well it is. 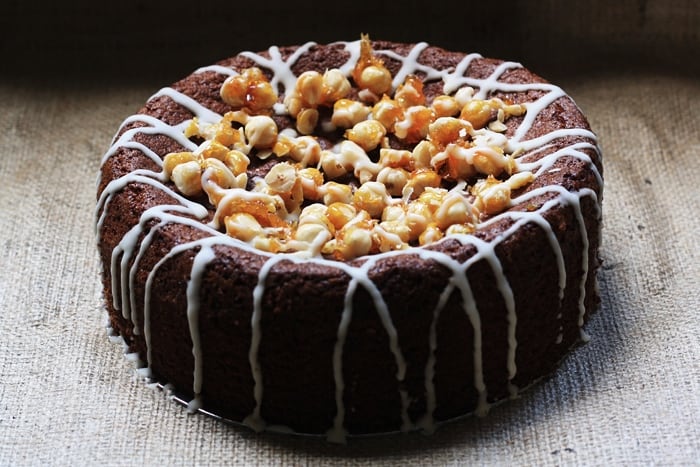 Although my experiments with gluten-free flour and gluten substitutions are ongoing, I have found that my most successful gluten-free cakes are the one that are created without any thought at all in the direction of flour. I know of one cake company that specialises in ‘accidently gluten-free’ cakes which I think is a lovely way of describing that their cakes were never intended to go anywhere near gluten in the first place. These cakes have an identity of their own, without feeling like inferior substitutes of the real thing.

The secret ingredient of this cake, well actually it’s not so secret as I’ve put it right there in the title of the recipe, is a spiced pear butter. You may recall a couple of weeks ago I was waxing lyrical about the apple butter I used as the main ingredient of my Toffee Apple Cupcakes, well this pear butter is made in much the same way and is just as delicious. It feels almost criminal to take the pear butter and use is solely for this cake, despite how wonderful the cake is, but don’t worry I’ve amped up the quantities of the butter in the recipe below so it should be enough to make two cakes, or you can use the rest to spread on a crumpet, dollop on your granola with a bit of yoghurt or even serve with your Sunday roasted pork joint. These are round and about the same uses I suggested for your apple butter, if the ideas were good the first time then I have no problem in recycling them.

The pear butter replaces the fat in the cake and is whizzed up with egg yolks and sugar to form the base of the batter. Ground hazelnuts, which I ground myself by whizzing up roasted and blanched hazelnuts in the food processor, are used to thicken the batter and give it body. Then finally, whisked and stiffened egg whites are folded in to aerate the batter and to ensure the height of the cake is kept during the bake. 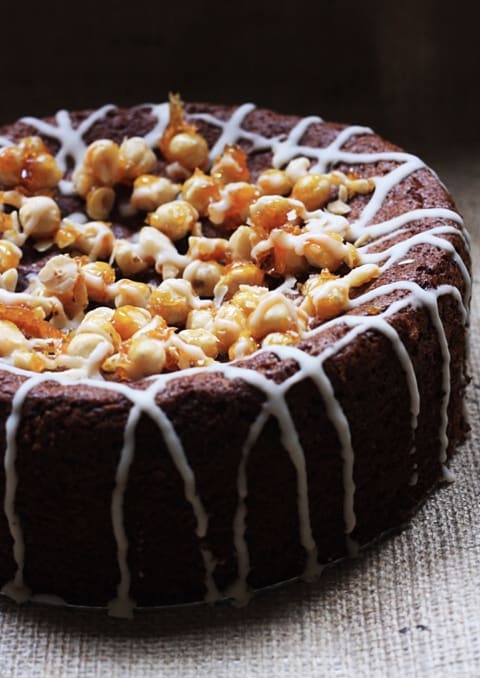 Now this cake cannot help but sink a little in the middle during the end of the bake, do not fear this is natural, and once it is decorated with the hazelnut praline and icing then it’s not noticeable at all. However, I have found a way of slightly counteracting how much the cake sinks by, and this is a new trick that I have incorporated into a lot of my cakes recently, including my brownies and my loaf cakes. To ensure an even bake you want to forget about the ubiquitous 180°C that is bandied around in recipes. In fact I went to a culinary salon with Rosie Lovell who suggested that 180°C is entirely too high and when she submitted her first book to her publishers she had to fight with them to maintain all her recipes at 170°C. It seems that the food industry is reticent to change but I agree entirely with her. In fact, for some of my cakes, like this one, I would even take it further. I like to bake this cake at 150°C for the first 10 minutes, then turn the temperature up to 160°C for the next 40 minutes until the cake is risen, is golden brown and an inserted toothpick comes out clean. There is nothing wrong with low and slow as far as baking goes, not all our cakes have to be in and out of the oven in half an hour. The only thing I would say about this method is to check the cake after the first 20 minutes and you’ll probably notice that it’s reached its colour peak. So just cover the top of the cake with a bit of domed tin foil for the rest of the time to ensure that it doesn’t burn.