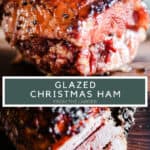 A Glazed Christmas Ham makes an impressive centrepiece for your Christmas Eve dinner and is surprisingly easy to make but do set aside some time for it.

You can be sure of one thing at our family Christmas, there will usually be a Glazed Ham and if so there will always be leftover ham in the fridge right up until the New Year. Not only does it make a superb supper, hot out of the oven when the glaze is sweet and warm and the ham falling away from the knife, but it also pays dividends cold from the fridge when you can’t face any more turkey but still fancy a sandwich.

To cook the ham

This ham is delicious hot or cold. It is tradition in our house to make it on Christmas Eve and serve it that night for supper warm from the oven.

I urge you to give this Glazed Christmas Ham a try. If you do then please leave a comment below and give the recipe a rating which helps others find the recipe on Google. If you then go on to use this recipe as a launch pad for your own culinary creation then I’d also love it if you’d share it and tag me on Instagram. It is so lovely for me to see your versions and variations of my recipes. 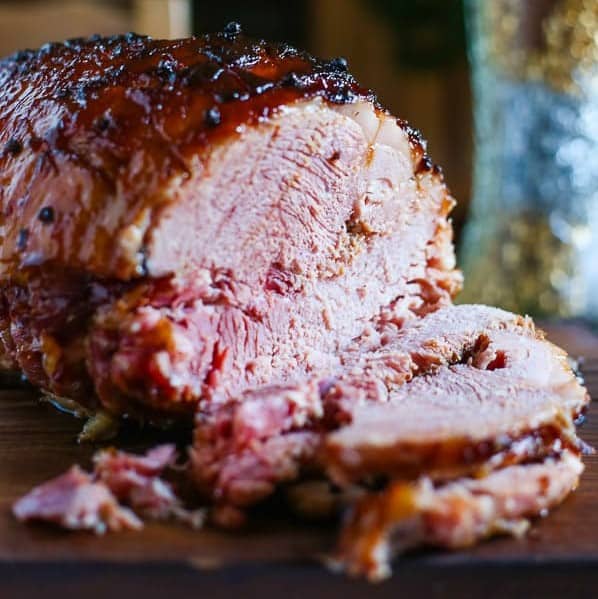 The ham is delicious hot or cold. Once cooked wrap up well and store in an airtight container in the fridge for up to 3 days before you want to serve it.

Jelly for the glaze

For the glaze usually use of the many pots of jelly that I have made during preserving season in the Autumn. My favourite homemade jelly to use is Rosehip Jelly but I have also had wonderful success with my Mulled Wine Jelly and my Apple Rosemary Jelly. Basically use the best jelly you can get hold of from your local preserver, or failing that every good supermarket stocks good old redcurrant jelly which is sweet and piquant and does the job nicely.

Please note that the nutrition information provided below is an estimate based on an online nutrition calculator. It will vary based on the specific ingredients you use. Please seek a professional nutritionist’s advice for further clarification. The nutrition serving is for 1 slice of ham, assuming the ham is cut into 12 slices.