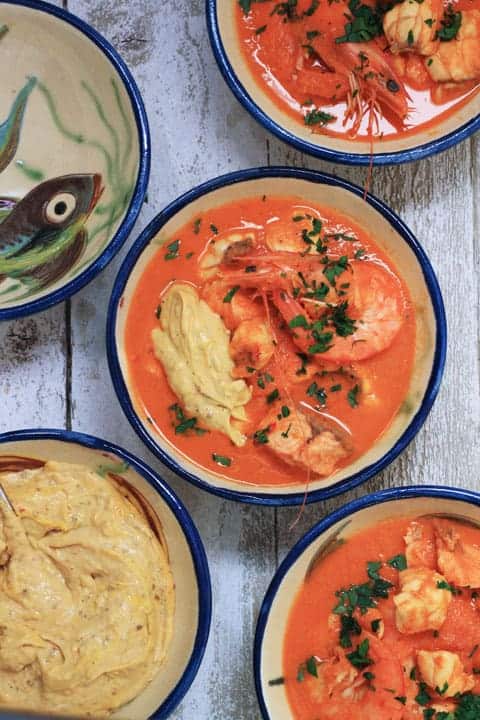 When I told my Mum I was making fish soup this week I could hear her nostalgia through the phone line as we both thought of the same thing, Dad’s fish soup. The memories of it are powerful, a deep tomato sauce spicy and imbued with pungent garlic. Our bowls would be overfilled with prawns, mussels, cod and salmon and we would always without fail eat it with hunks of white crusty bread slathered with salted butter which we would plunge into our soup bowls, gathering up fish and as it dripped with tomato sauce.

That said, this is nothing like my father’s fish soup so sorry if you are now longing for that dish instead of this one. When I began my soup that is exactly what I had intended but then halfway through the preparation I became sidetracked by the thought of the wonderful bouillabaisse I had at Ondine in Edinburgh last year which relies more on a stock based soup instead of tomato. So in the end this turned into a very bastardised version of that.

Now, the first thing you need to do when making a bouillibaissey type soup is to make your fish stock…

Guys, I could not be bothered with making a fish stock. Sometimes you just don’t want the faff to deal with fish heads and bones, cooking for hours then straining and blah blah blah. I had some chicken stock in the freezer so that was fine by me I decided. I will not decry you if you want to be less lazy than me, although I might think you were trying to show me up. You could buy fresh fish stock from the fishmonger which would make your version more authentic but I’d still be on top as I made my stock myself, despite the chefs in Provence scoffing and shaking their heads in disgust at me. Basically what I’m saying is that you need stock and you can be lazy about it. But not too lazy, heaven forfend did I hear you utter Knorr? 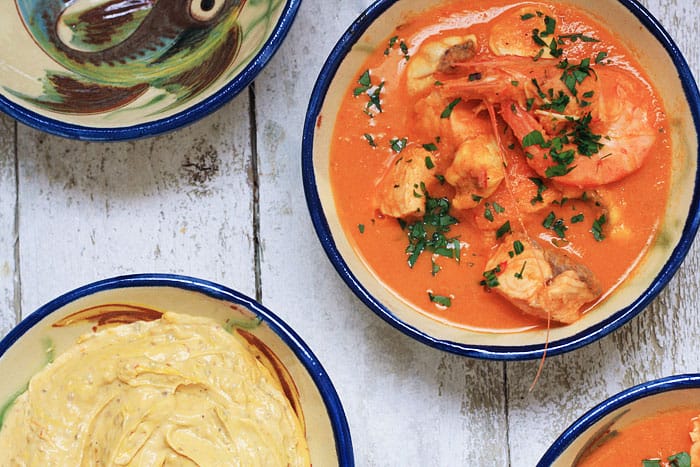 I served my soup with a rouille which is a traditional accompaniment to bouillabaisse and made with lots of garlic, saffron, bread and olive oil. However, I have messed around with that too and used white potato as a base for it instead of bread. Actually I used jersey royals which I’m sure in some circles I would be shot for. Restaurants tell us jersey royals should be prepared one way only, the soil should be lightly brushed away then the potato grazed with boiling water and served plainly with a kiss of butter so we can appreciate their sheer potato royalty. Well, I boiled it until it fell apart then blitzed it in my processor with oodles of garlic, chipotle, egg and olive oil. Yum. Although it was just laziness again as when I noticed I had a few jersey royals in, suddenly the shop with the correct floury potato seemed so far away. The good thing about using jersies is that you don’t need to peel them, I think it added to the flavour, although if you want a smoother rouille, you might want to do without the peel.

The rouille should have the consistency of a mayonnaise and if I haven’t done so already in this post I would just like to shame myself further as when I made the rouille I had to taste it, to check for seasoning, make sure I wasn’t adding too much chipotle in there etc. Then when I had got it just right, I took a few more tastes just to make sure. Yeah, that’s okay so far, but even then when I was so positively sure that I had got the flavour balance perfectly, I took just a few more spoonfuls. Then some more. Then some more. So, this sauce is like that. Prettee tastee.

It was lucky that I was spending the afternoon by myself as no one would have come near me after that, I went to say hello to the cat and it shot out of the room faster than a celebrity responding to the ice bucket challenge. So the rouille had depleted somewhat before it made it to the photos, but this recipe makes tonnes so you don’t need to worry if chef gets a little carried away. You only really need a dollop of it on your soup, but you may not be able to stop there and maybe possibly it might need to have its own bowl with a spoon for you to attack when you’ve finished your soup. That’s okay, there’s no judging here. But be warned, it is garlicky and then some.

It’s a bit of a family Friday today as I’ve talked about my Mum, my Dad and now I’m going to talk about my sister who gave me these gorgeous fish bowls last Christmas which she brought back for me from Spain. As soon as I opened them I was imagining bowls of rich fish soup and so I’m thrilled that the meal that I was planning 8 months ago has now finally come to pass. So now you know that I am always late as well as lazy. 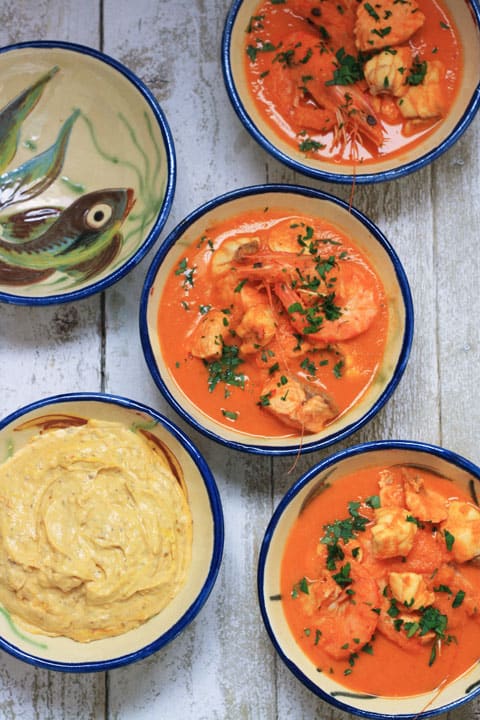