This Cashew Chicken Satay is my favourite food on a stick, made superior with a delicious cashew satay dipping sauce and a flavourful Carrot and Coriander Salad. 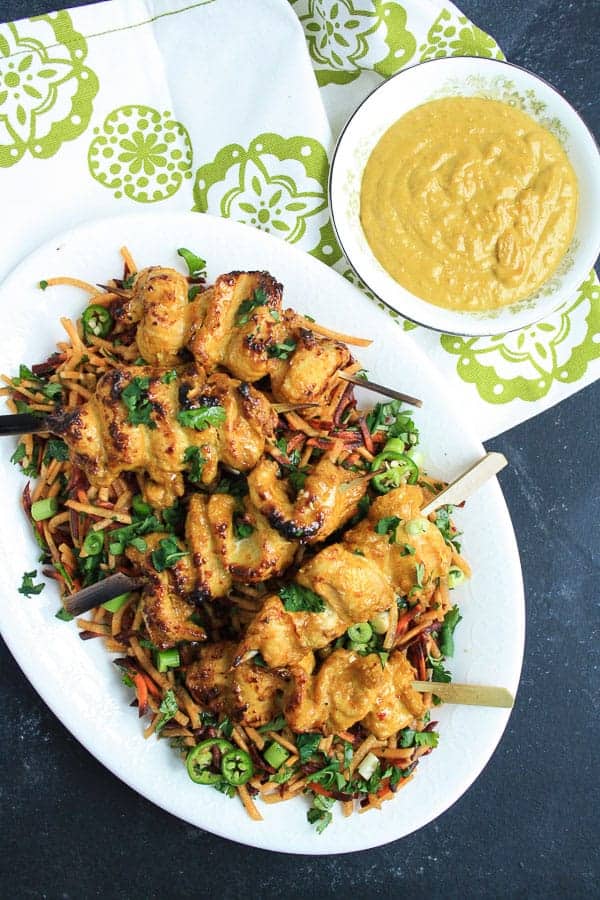 The deli counter was a big thing growing up. It was my favourite destination during our weekly trips to the supermarket and it was here that my sister and I were allowed to choose one treat to snack on in the car on the way home. I always, without a doubt, chose the chicken satay. Thinly skewered pieces of cooked dry chicken covered with a tasteless spices and rammed onto cocktail sticks. I loved them. I have no idea if you can still buy them anymore but I remember as soon as Mum had loaded the car up with the shopping, I would rummage carelessly through them for my promised chicken satay. As I clambered into the car I was already tearing the label in half which held the wimpy plastic deli bag together and brandishing my prize. Before the car engine had even been started the skewer had been devoured in one, two, three bites and the wooden stick tossed with abandon over my shoulder (until I was told off by Mum for littering the car and made to reclaim it dutifully).

My love of chicken on a stick has not diminished into adulthood. I usually wait until summer’s barbecue season before overindulging in chicken kebabs but as soon as the first of January hit I have been hankering after the chicken satay skewers of yore, except done, hopefully, a little better. 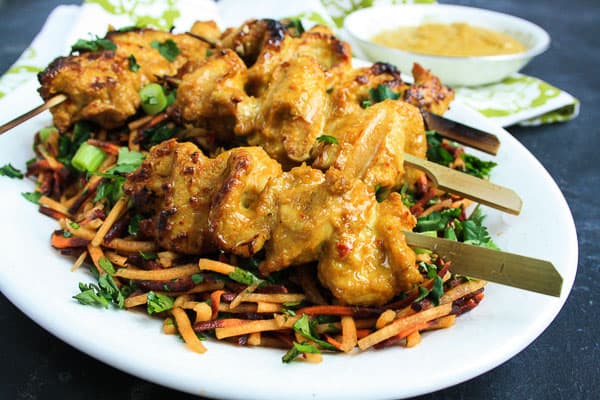 I am still coming to terms with my horrendous computer crash, which I suffered just before Christmas. One of the most frustrating things about losing all my work is all the recipes which I had great ideas for that have now been lost in the ether. Hopefully though if I thought of them once, I might recall them one day again. There are some ideas though that even though they went down with my hard drive they have never been relegated to the recesses of my mind. These, must have been the best of the bunch and are the ones I am now excited to share.

This Cashew Chicken Satay is one of those recipes. I don’t know when I first thought of it but like all my greedy thoughts it was hastily typed into my laptop and saved into a list of hundreds of recipes, destined for the kitchen far into the future. However, for some reason, this recipe has stayed with me and has been saved from destruction by my memory.

I was so happy then when it worked out just as I had hoped it would, in fact, if I may be so bold I think it worked out better and is definitely going to become a regular part of my mid-week repertoire. Cashew nuts are just as tasty as the more traditional peanuts in a satay. They are slightly sweeter so they lend a more tempered and delicately flavoured result but one I actually think I prefer despite being a fully paid up member of the Peanut Butter Forever fan club. This also means it’s suitable for most January detoxes which tend to eschew peanuts. There is nothing I like better than adapting a recipe for a healthy eating plan and finding you have lost nothing at all in the translation. 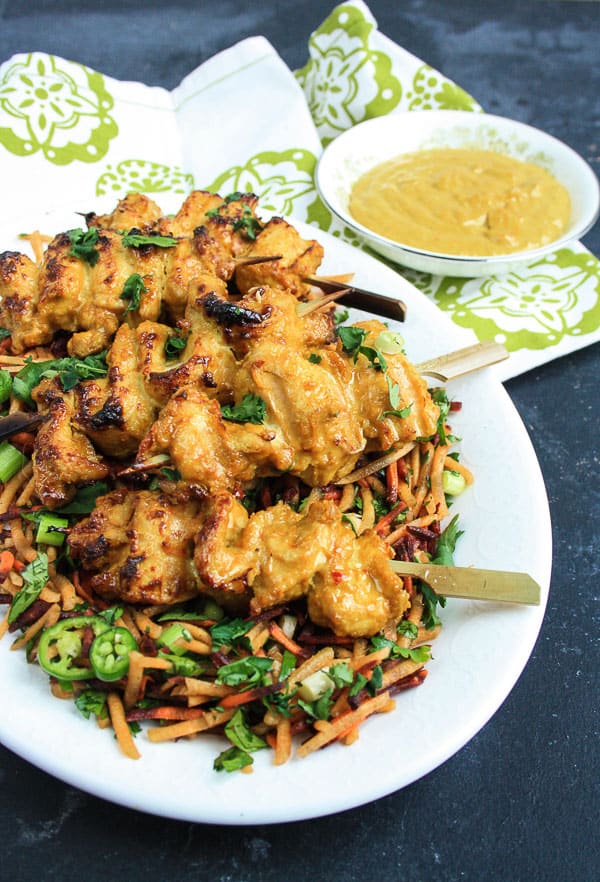 I paired my Cashew Chicken Satay with a bright rainbow carrot salad, singing with fresh coriander, the bite of spring onions ,the occasional heat of green chilli and the zing of lemon juice. This kind of salad is perfect for January as it’s robust and crunchy and jam packed full of drizzly rain busting flavour and colour. 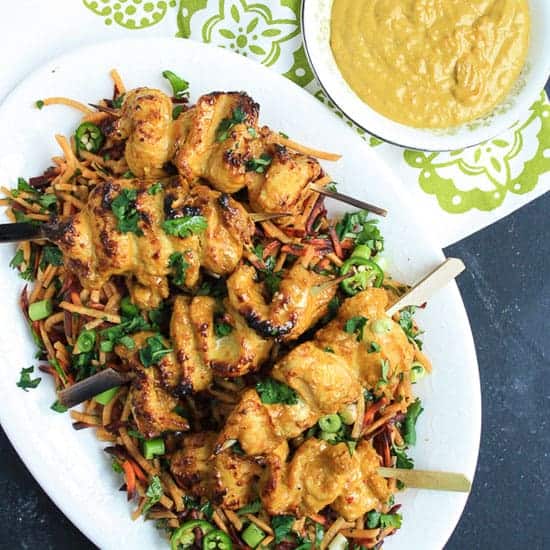